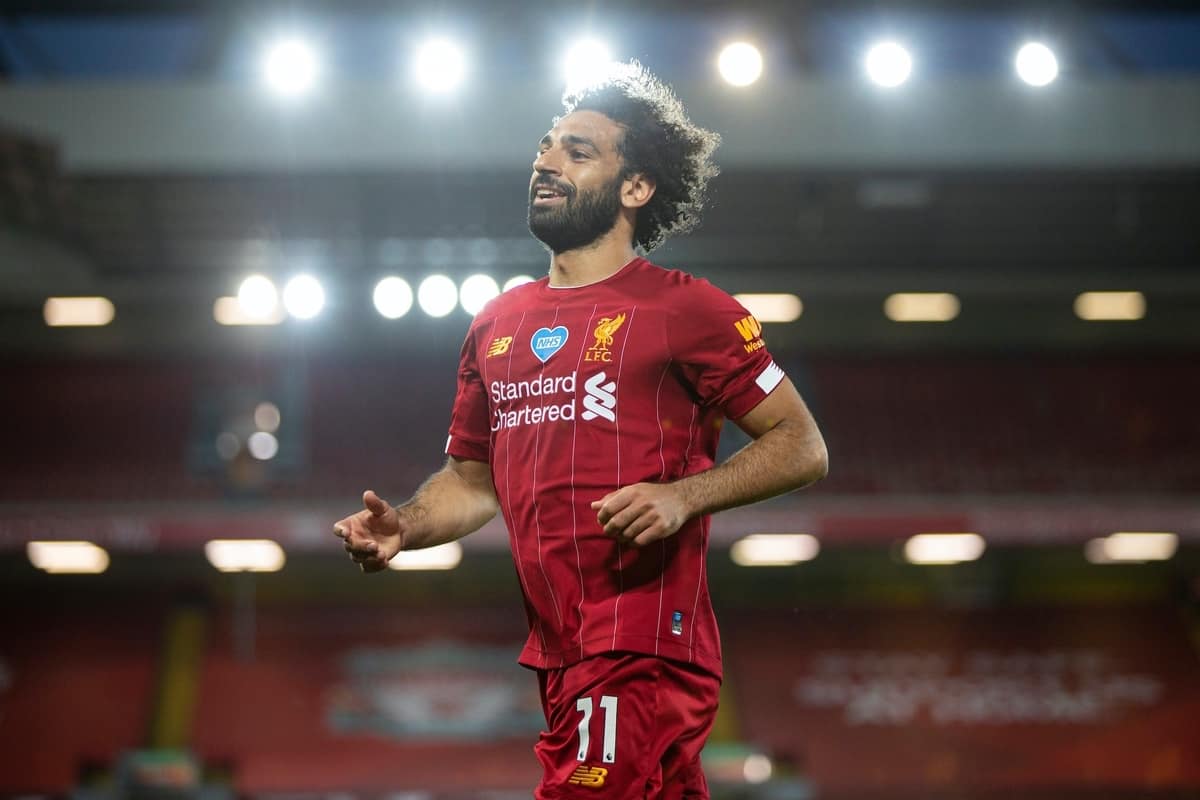 Liverpool’s first home game behind closed doors ended in an absolute demolition of Crystal Palace as the Reds put themselves on the very brink of the title.

The chance to rotate, the boiling temperatures, the increased use of subs… but we saw Jurgen Klopp revert to his strongest side of the season.

Of course there will be an element of fitness and form in this selection, but above all else it seems a bit of preparation for Manchester City, who the Reds play in just over a week.

That game, assuming City beat Chelsea, could see the Reds take the Premier League crown from Pep Guardiola and his side in their own back yard—but City will have played five fixtures by then to the Reds’ two, so minutes on the pitch for the ‘starting XI’ are at a premium right now.

Add in returns for Gomez and Robbo and we know every run off the ball that will be made, every recovery run, every attempted through pass, clipped cross and run behind the defence.

So do the opposition, but stopping is a different matter.

The Liverpool we know

In stark, super and much-celebrated contrast to the Merseyside derby, Liverpool’s performance at Anfield was back to the type we’ve come to admire and expect.

The pressing was relentless and high up the pitch, the passing was sharp, crisp, positive and purposeful.

Runs behind the defence were constant, while the rotation of positions could be seen between Salah and Henderson or Mane and Firmino, keeping Palace guessing and largely chasing shadows.

This is the Liverpool which has won the league.

It did a bit of a disappearing act for a while pre-Covid, but it’s a hard old way to play so consistently and relentlessly – that’s why nobody else can do it and why Liverpool are the best.

It wasn’t, in the end, a performance which will secure the title. But it was one which showed exactly why we’re winning it.

Fantastic front three back on track

A great first half from the Reds owed much to the way the front three quickly clicked, individually and in tandem.

In the opening 15 minutes or so there were two instances of Sadio Mane and Bobby Firmino linking up with intuitive class, with the No. 10 in particular not letting Palace’s defenders get anywhere near his series of chest controls, back-heels and darts down the channel.

The Reds clocked up 100 goals in all competitions with Salah’s strike just before half time, and it was immediately apparent just how much we missed him in the derby with his runs in behind the defence.

Mane’s goal, the Reds’ fourth, was the perfect build-up between all three forwards.

To put into perspective how good that attacking display was, the Reds had 12 shots in the first half—scoring twice and hitting the woodwork once—and ended with four goals and 21 shots during the full 90 minutes…

…against a side which had previously conceded 1.07 goals per game across the course of the season, the joint-third best in the league.

Fabinho, the unstoppable force in both halves

He has started back in some form, hasn’t he?

There isn’t an awful lot new to say about what Fabinho did: he won back possession countless times, he showed a brilliant range of passing, he hit an unstoppable thunderbolt.

It’s great to see the Brazilian thriving and shining and he’s a key part of this Reds side.

With him fit and confident, we’re a better team, it’s as simple as that.

Over to City, this week and next

Liverpool are 23 points clear at the top.

When and how we win the title is now in large part down to Man City, with them facing Chelsea on Thursday, an FA Cup game at the weekend and then hosting Klopp and Co. next midweek.

If they don’t win at Stamford Bridge, we’ve won the title.

Simple as that, without stepping foot back on the pitch. Is it the ideal way to win the league? No, but after 30 years, perhaps it doesn’t really matter – the hard work has been done between August and February, anyway.

If City beat Chelsea, it’s back to us and our chance to seal the trophy by taking something, anything, at the Etihad—a very symbolic and literal passing of the crown in their back yard if it happens.

Over to Pep, but hats off to Klopp.