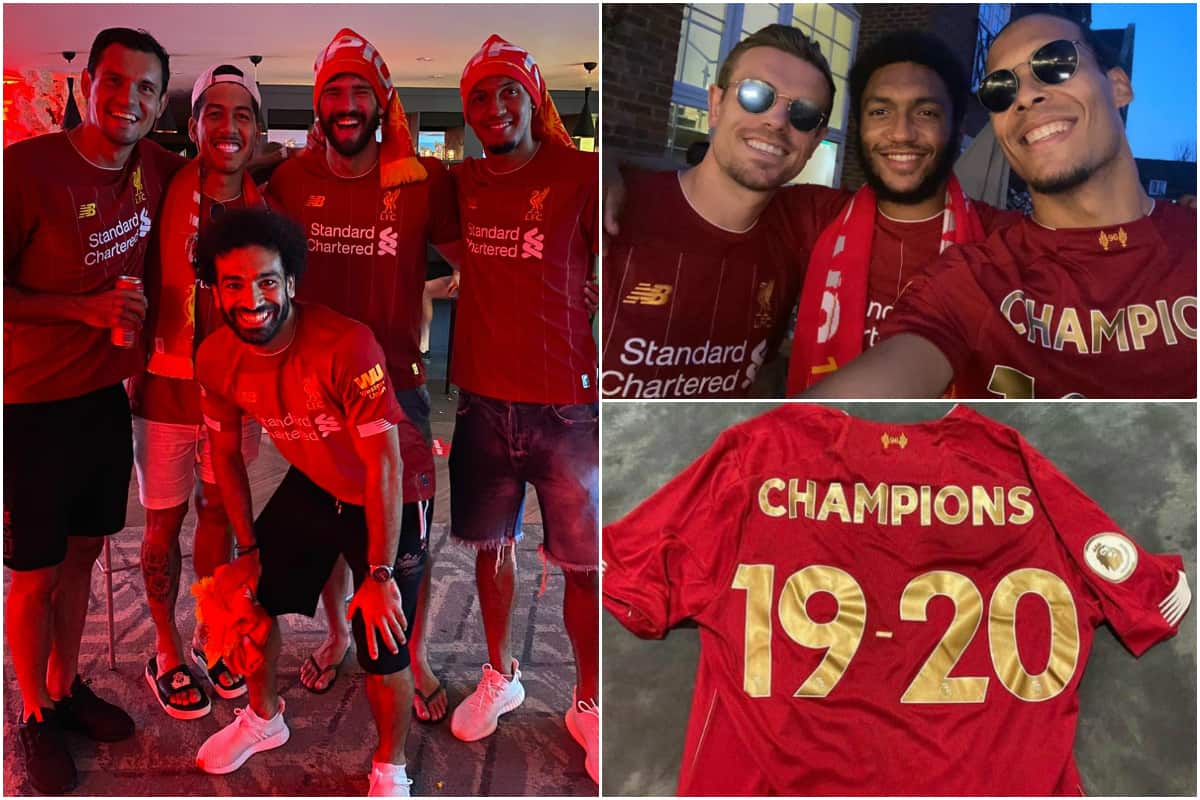 Liverpool are officially the champions of England, and the Reds players have been soaking up an incredible achievement on social media.

After 30 years of waiting to win the league title, Liverpool sealed Premier League glory on Thursday evening, courtesy of Chelsea‘s 2-1 win at home to Man City.

This is a remarkable achievement by an all-time great Reds outfit, led in unrivalled fashion by Jurgen Klopp, with world-class players achieving greatness on the pitch.

Captain Jordan Henderson has now ensured legendary status among Reds skippers, and he was one of the first to celebrate the success:

Virgil van Dijk looked typically cool alongside Henderson and Joe Gomez, as the players basked in the triumph together on a glorious evening:

At the end of a storm, there’s a golden sky.. We did it!! Dreams do come true.. pic.twitter.com/9tBvflkHEM

What an incredible signing he has been – perhaps the most important of the Jurgen Klopp era.

Trent Alexander-Arnold shared a superb video of the players dancing along to ‘Show Me Love’, as the party went long into the night:

At the end of the storm, there’s a golden sky ?? #YNWA

Wonder what he wants ? Looks like I’ll need to update my background!! CHAMPIONS!!!!? pic.twitter.com/UNIfcQoB7q

Mohamed Salah has contributed as much as anyone under Klopp and he shared a lovely photo with best pal Dejan Lovren, and Brazilian trio Alisson, Fabinho and Roberto Firmino:

Yes. It feels THAT good. I want to thank all our supporters watching us from all corners of the world. You made this possible for us and I hope we can keep bringing you the joy you deserve. ? now they’re gonna believe us ? ? pic.twitter.com/bqkXM1Fjpj

Firmino is known for his flamboyance both on and off the pitch, but he was actually more restrained in his celebrations (on Instagram, at least!):

The same applied to the incomparable Sadio Mane, who is surely the strongest contender for Player of the Year this season:

James Milner decided against one of his brilliantly dry Twitter posts, instead speaking of his pride at playing for such a special team:

30 years Reds! Let’s enjoy it! ? Honoured to be part of this team & this club #ynwa #champions#cantwaittocelebratetogether pic.twitter.com/wNbptyIcJw

Gini Wijnaldum has been a key cog in the machine and he is now a league champion for the second time, having won the Eredivisie at PSV Eindhoven:

Divock Origi shared a brilliant photoshop of him sitting with the Premier League title between his legs:

Naby Keita posted an emotional message thanking his families and supporters, along with the people of his native Guinea “whom I also dedicate this title of champion of England”:

Harvey Elliott used a brilliant throwback photo of him as a child in his Liverpool shirt, having achieved a (relatively short) lifelong dream:

Anfield! We made it all together ??? pic.twitter.com/z9Htq3ooUR

Premier league champions?, congratulations to all players and staff involved. Thank you to all the fans?????? We will finish on a high!!!

What a club!!! ??? Unbelievable season?? @liverpoolfc

Klopp’s men now have a whole week to further enjoy their achievement, prior to visiting City next Thursday.