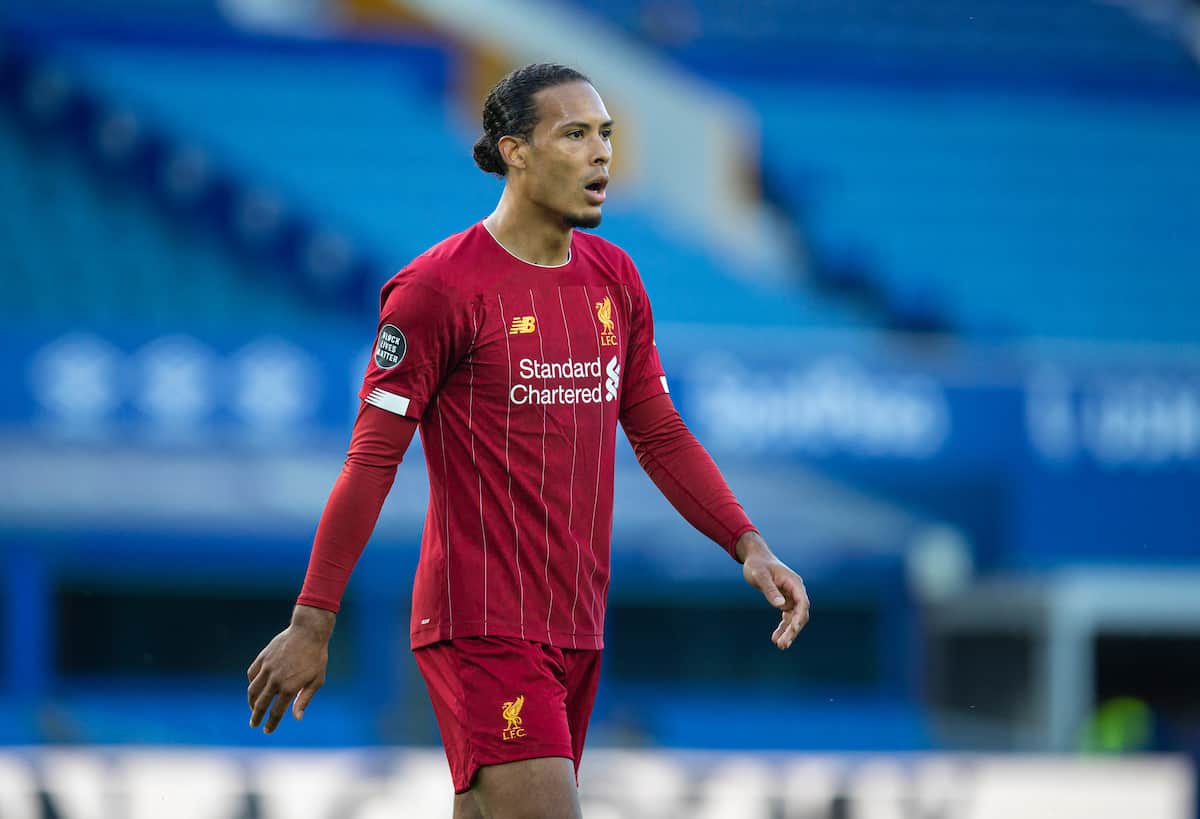 Despite the disappointment of not walking away from Goodison Park with all three points, Virgil van Dijk remained focused on the view that “it’s another step closer to our goal.”

Despite often displaying a flair for the dramatics, after over 100 days without competitive action Liverpool returned with a lacklustre scoreless draw against Everton on Saturday.

It was a performance many would have expected after watching the previous fixtures on the Premier League‘s return and although there will be lingering disappointment that a victory wasn’t secured, for Liverpool’s No. 4 it was a welcome return which moved Jurgen Klopp‘s side closer to the end goal.

“It’s pretty difficult to say at the moment, it was very intense. Both sides created small opportunities, obviously, they had maybe the biggest one with the post,” Van Dijk told Sky Sports following the game.

“Apart from that, at times we created some small opportunities, we had the ball quite a lot and, of course, couldn’t find breakthrough which is the most import thing but I think everyone is just happy to be back. We didn’t lose and it’s another step closer to our goal.

“First of all, they’re not bad defensively we have to give them credit for that, they kept it compact and that’s what we expect from a team from Carlo Ancelotti, it was tough.

“It was tough for them to find the breakthrough, for us as well and I think it was a very intense game.”

As the Dutchman noted, despite Liverpool’s possession it was the Blues who came the closest to breaking the deadlock after Tom Davies hit the post, where he, Joe Gomez and Alisson proved decisive in keeping the first clean sheet in seven games.

But the relief of getting the first game out of the way was clear after months of being in the dark over how and when the league would resume.

“You’re just trying to be ready for what’s coming next and I wasn’t thinking ‘oh it’s going in or anything’, I tried to be there for the ball not going in and luckily I was there to tap it for a corner,” he continued.

“A lot better [to have played first game], obviously everyone didn’t know what to expect, the whole procedures before the game, how things will go and obviously it was just good to be back out there and I think it’s a fantastic game to be playing your first game after so long.

“And hopefully we can keep the good things for Wednesday and do well at home.

“We are a step closer, obviously we wanted to win and get the three points today but we’re another step closer and we try to improve every time and we’ll see how that will develop over the next couple of weeks.”

All eyes will now be on City on Monday evening as they hold the keys to the possibilities of when the title can be secured, but Van Dijk remained coy as to whether a night in front of the television was on the cards.