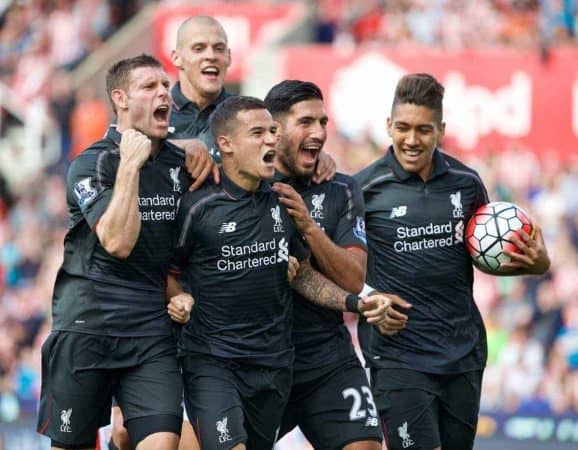 Liverpool were forced to dust themselves off ahead of the 2015/16 season, one which saw two managers take the helm and a new era ushered into Anfield.

Despite increasing pressure after a dismal 2014/15 season, Brendan Rodgers remained in the manager’s chair at the start of the season, with new faces in the backroom and in the dressing room.

Colin Pascoe and Mike Marsh were no longer Rodgers’ closest confidants, instead, Gary McAllister and Sean O’Driscoll were added to the fold – as was Pep Lijnders.

A summer saga in the form of Raheem Sterling’s £49 million move to Man City dominated headlines, while for the first time since 1998 Steven Gerrard was no longer a Red.

It made it abundantly clear that Rodgers needed to right the ship, and quickly, but he would oversee just eight games before Liverpool’s owners pulled the plug and gave Jurgen Klopp the keys to the kingdom.

There was to be no easy fix but with the German at the helm, the Reds would qualify for two cup finals and ultimately finish the Premier League season in eighth place with 60 points.

A total of 17 players would find an avenue to goal in 2015/16 which would see Liverpool finish what would be a transformative campaign with 63 to their name.

Rodgers hands the Kop to Klopp

In Rodgers’ last 10 league games at the helm, spanning over the end of the 2014/15 season up until his dismissal following the clash against Everton, Liverpool dropped points on seven occasions.

A mere 12 points were collected from a possible 30; the writing was well and truly on the wall.

Belief on the field and in the stands was an all-time low and the long-term view was obstructed and lacked any clear direction – with FSG finally pulling the plug on October 4, where plans for the next man in charge were well and truly in motion.

Klopp would be officially announced as Liverpool’s new manager four days later, a day forever remembered for his words of: “We must turn from doubters to believers.”

It was not instantaneous but the storm cloud over Anfield started to clear and Klopp worked wonders on a squad which was littered with deadwood.

Consistency remained elusive with Liverpool only able to string together no more than three consecutive victories on two occasions, but Klopp extracted what he could from his side and optimism was the word for the years to come.

Before Rodgers could depart, however, he would oversee one last summer transfer window and as had been the trend throughout his time in charge, it would return mixed results.

After failing to adequately fill the hole left by Luis Suarez in the summer of 2014, he would again turn his attention to a forward who raised eyebrows as to his suitability to Liverpool’s style of play.

It set the club back £32.5 million to secure Christian Benteke from Aston Villa, the second-highest fee paid for a player in Liverpool’s history – but he would last just a single season.

He would score nine goals in 29 games, with his bicycle kick at Old Trafford the clear standout, but he was never going to be a player relied upon by Klopp.

There were success stories, however, with James Milner’s move on a free transfer proving to be a masterstroke, while a young Joe Gomez arrived and hit all the right notes from the off – only for an ACL injury on international duty on the cusp of Klopp’s arrival to set him back.

Danny Ings and Roberto Firmino were added to the mix for a combined £37 million, with the latter only blossoming after Klopp effectively utilised his skillset.

The England international would suffer the same fate as Gomez, but they would each endear themselves to the Liverpool faithful in the years to come and prove key to the success which followed.

The January window was quiet, with Marko Grujic added and sent straight back out on loan, but it was the loan signing of Steven Caulker which returned some memorable moments, notably debuting as a makeshift forward against Arsenal when we trailed 3-2.

Liverpool’s move for Caulker came as a result of their defence being depleted by injury, of which they had little luck with throughout the season.

The arrival of Klopp and his high-intensity approach was pointed to as the trigger for many onlookers, where by January they had accumulated nearly 40 separate injuries to over 15 players.

It saw 34 players turned to throughout the Premier League season, four more than any previous season in the competition, in part contributing to the inconsistency on show with just 13 league wins accumulated during Klopp’s first 30 games in charge.

It did little to help the poor defensive showing at set-piece on from crosses, with anxiety at an all-time high when the opposition had a chance to load the penalty area.

They conceded 15 times from set-pieces, the joint-second worst record in the history of the Premier League, with both Simon Mignolet and Adam Bogdan culpable of a number of calamities.

They weren’t on their own as the Reds conceded 11 times due to mistakes of their own making, where a total of 50 conceded goals were conceded across the 38-game season.

The inability to clear the first and second ball proved decisive, as did the lack of organisation, leadership and the collective experience of their failures in previous games.

But future additions would go a long way in addressing the issue, so much so that an opposition corner holds more hope of a counter-attack goal than it does for conceding.

Speaking of goals, however, the Reds scored some stunners and topped the charts for the most goals from outside the box in the competition, with 15.

And Philippe Coutinho was on hand for a number of them, starting on the opening day at Stoke and then again with a weaving run at Chelsea, at Southampton and against Everton – he would finish the season with eight league goals.

The most significant would arguably be Divock Origi’s against West Brom, with the Reds behind and full-time edging closer the Belgian struck and a salute in front of the Kop would follow.

It would be mocked by opposing fans but it proved to be a significant turning point for the fans, players and the entire club in order to read from the same page moving forward.

Roberto Firmino also hit the headlines with 10 of his, the most of any Red in the Premier League, with his pinpoint stunner against Arsenal the top of the bunch.

And while just 16 wins would come Liverpool’s way, there was plenty to celebrate in terms of goals – you can take a pick at any of the four scored at Man City, while the 5-4 win at Norwich was truly something to behold.

The Start of Something New

Ultimately, it was another season of transition but importantly it was one whereby the future direction of Liverpool Football Club became clear and was set in motion.

Belief was injected into everyone associated with the club and we became known as the ‘Comeback Kings’, but the inability to hold their lead, their questionable form at Anfield and the struggle to overcome bottom of the table sides saw the Reds come unstuck.

A staggering 19 points were lost after taking the lead in 2015/16 and only eight home wins were notched – there was a blueprint for what needed to change.

Agonising cup final defeats in the League Cup and Europa League showed what was possible and Klopp was not afraid to dive into the deep end, offloading the deadwood and tweaking his side more to his liking and Liverpool would come out firing in 2016/17.