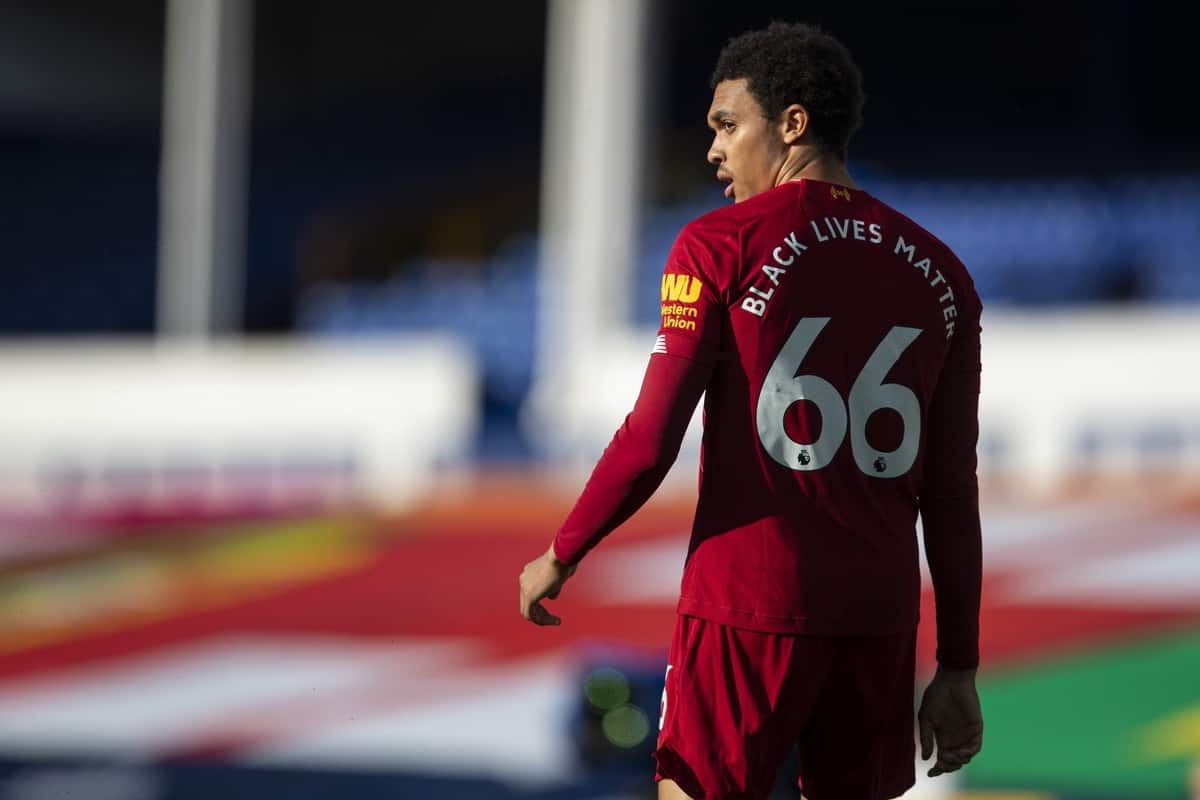 Liverpool could only draw 0-0 at Everton on Sunday night, as their return to Premier League action started in forgettable fashion.

Alisson was back after recovering from injury, looking to reinforce his status as the world’s premier goalkeeper.

In truth, this was a quiet return for the Brazilian, who was largely tasked with being one of the few spectators inside Goodison Park.

He came alive late in the day, however, thwarting Dominic Calvert-Lewin and Richarlison, outlining how priceless he is.

Aiming to continue from where he left off, Liverpool’s assist machine struggled.

His usual world-class accuracy was nowhere to be seen, whether it be delivering crosses or attempting long-range passes, and he cut a frustrated figure because of it.

Arguably the rustiest player on show.

Matip was preferred to Joe Gomez and Dejan Lovren, and he enjoyed a solid outing alongside Virgil van Dijk.

The 28-year-old was calm in possession and willing to stride out with the ball, but also dogged in his defensive work, when called upon.

Got injured in the second half, which is a worry. 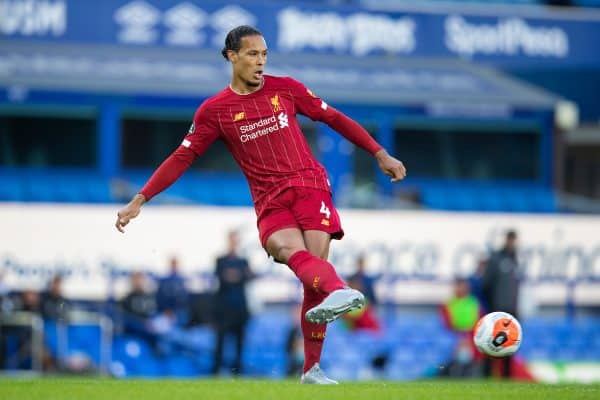 Liverpool’s most important player carried on his ever-present run in the Premier League this season.

This was a typically assured outing from Van Dijk, who kept the vocal Richarlison quiet throughout, following some bullish comments from the Everton man during the week.

One superb pass to Gomez was his standout moment.

With Andy Robertson absent, the versatile Milner reverted to the left-back role he regularly occupied back in 2016/17.

Having received a booking for a foul on Richarlison, the veteran then limped off shortly before half-time and was replaced by Gomez.

Struggled to match Robertson’s natural width and energy down the left flank.

Fabinho was in a poor run of form prior to the season being halted, but he grew into the game impressively on Sunday evening.

After a shaky start, which included a wayward header that put his team-mates in danger, he was a tenacious performer, biting into tackles and keeping things ticking over.

The skipper has had a season to treasure and it was no surprise to see him at the hub of the midfield action at Goodison Park.

Henderson was lively throughout, looking to link with Alexander-Arnold at every opportunity and also tracking back endlessly.

He will have better performances, but this was a strong return overall. 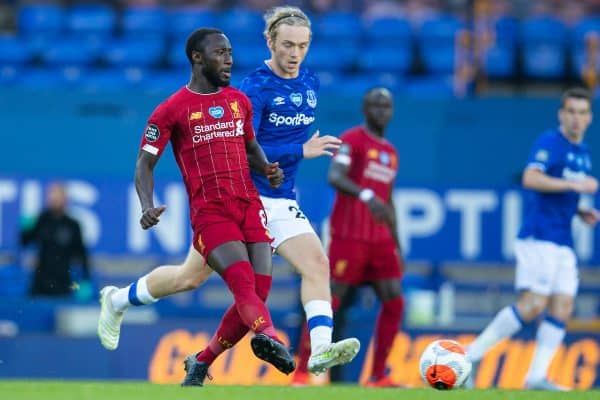 Having reportedly starred in training, and a few friendly matches, Keita was given a chance to shine in place of Gini Wijnaldum.

He did exactly that, looking a class act in midfield with his deft touches, silky movement and ability to break the lines.

Keita looked like making something every time he was in possession, and Jurgen Klopp will surely be encouraged by that he saw.

Shot wide after a lovely one-two with Roberto Firmino.

Minamino was handed a surprise start in the absence of Mohamed Salah, as he looked to kick-start his Liverpool career.

One well-struck early strike flew over the crossbar, but the Japanese looked a little lost out on the right, too often coming deep and failing to look a threat.

It was a tidy showing, but Salah’s absence was felt. Replaced at half-time. 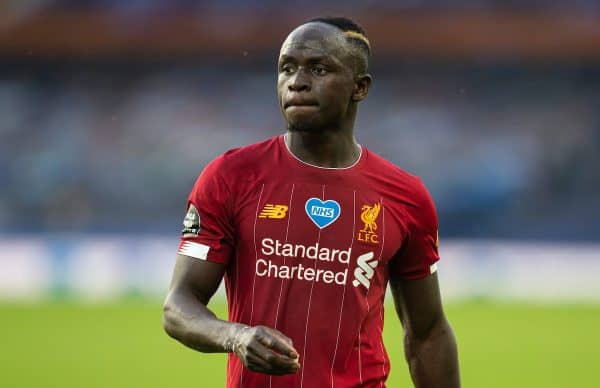 Mane has arguably been the Reds’ Player of the Season and he was a menace once more against Everton.

It took a while for the No. 10 to click, but it wasn’t long but he was wriggling through tackles, beating opponents and looking the most dangerous attacking player on the pitch.

Tired as the game went on, like so many.

Back sporting his latest new hairstyle, Firmino did his usual selfless work on and off the ball, but his final ball wasn’t quite there.

He shot wide when the on-rushing Keita was a better option, summing up his evening. 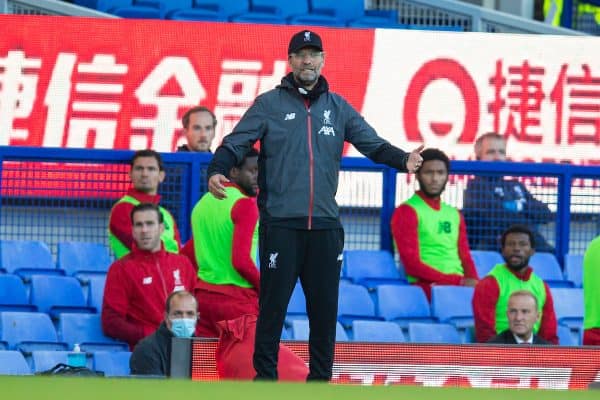 Gomez did admirably in a rare left-back role, and made one crucial block to deny Tom Davies late on.

It didn’t happen for Oxlade-Chamberlain, who had a similar impact to Minamino.

A fairly ineffective showing from the Dutchman, who failed to match Keita’s quality.

It wasn’t to be this in a derby for Origi, who was ineffective. 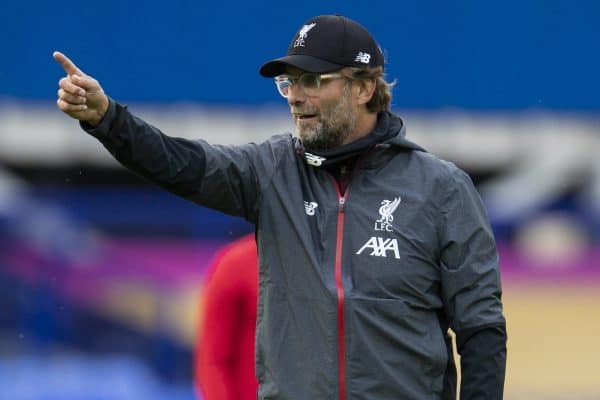 There could be few qualms with the manager’s starting lineup—picking Keita was a good decision—but his substitutes appeared to kill the game.

Taking off Keita backfired, while Oxlade-Chamberlain and Origi did little to add to proceedings.

All in all, this was an adequate return from the boss, who will be content with a point—even if the wait for the title may go on for another week-and-a-half.