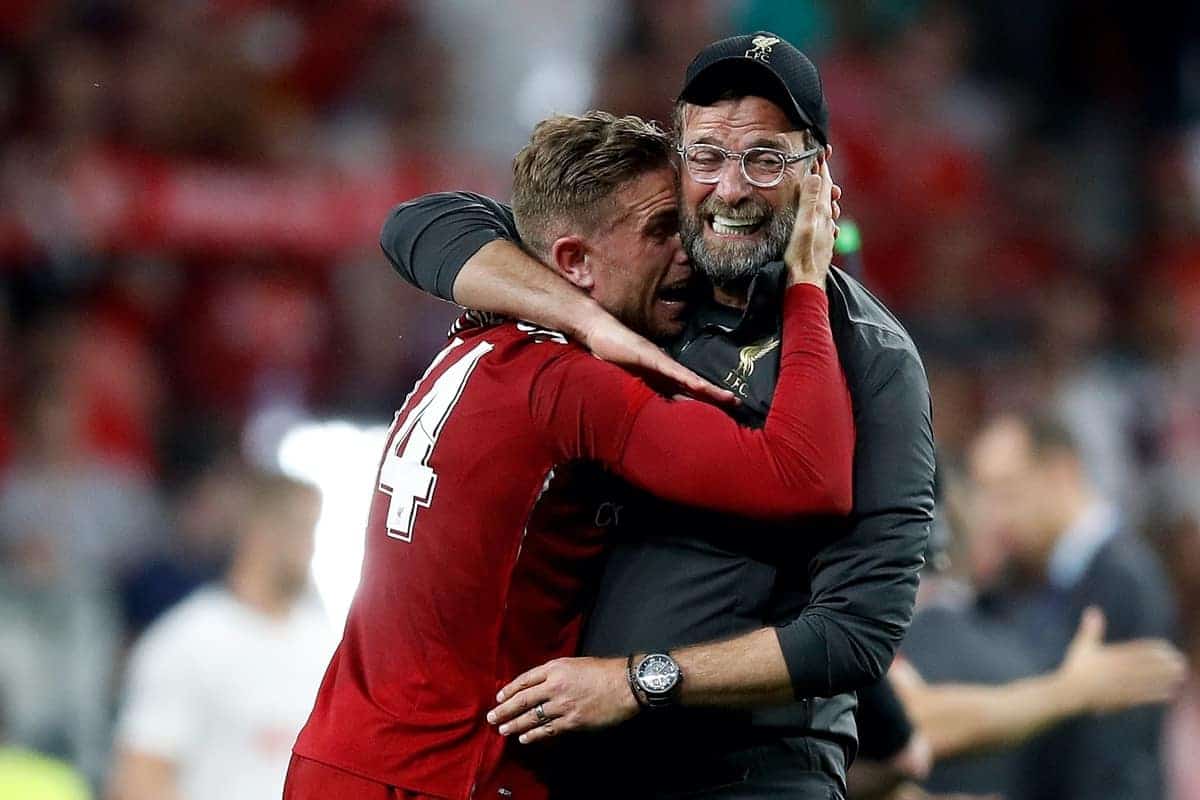 Jordan Henderson believes he owes an unpayable debt to Jurgen Klopp, for the way in which the Liverpool manager has influenced his game and his success on the pitch.

As Liverpool’s longest-serving senior player, Henderson has played under three different coaches over the past nine years, amassing 359 appearances for the club.

He has been most prominent under Klopp, who has called upon his captain 171 times as the Reds have won the Champions League, UEFA Super Cup and Club World Cup, and soon the Premier League.

Early in his time on Merseyside, Henderson was offered to Fulham as part of a deal to sign Clint Dempsey, but having fought for his place under Brendan Rodgers, he has taken another step with Klopp at the helm.

Speaking to Rio Ferdinand for The Locker Room, the 29-year-old said he “could never repay” Klopp for his role in his development, and that of Liverpool as a whole.

“I could never repay him for what he’s given me as a person,” Henderson said.

“But not only me: it’s the team really. What he’s done since he’s come into the football club is so special.

“I remember when he first came he said that he wanted to change Liverpool from doubters to believers, and he certainly did that.

“The confidence that we get from him, and how we’re playing and how we’ve been over the last few seasons, winning the Champions League, winning the Super Cup, winning the Club World Cup, performing so well in the league. It’s all down to him, really.

“Of course, as players, you’ve got to take it on board, go out there and do it, and we’ve got such a fantastic team, but I feel as though he brought us all together and we then followed his lead.

“And so far it’s been pretty special, so I just hope it can last for a long, long time and we can just continue to grow, continue to learn from him, and win more trophies in the future.”

Henderson has played a variety of roles during his time at Liverpool, some more popular with the captain than others—his stint as No. 6, for example, left him yearning for more freedom on the pitch.

But he now believes this has put him in a better position, with his mindset to do “whatever [the team] need me to do,” sacrificing himself for the Reds’ overall success.

“As a player, I’d like to think I just try to do the best I can possibly do at what I’m asked to do by the manager and my team-mates,” he explained.

“So whatever they need me to do, whatever position that may be, I do it to the best of my ability and I’ll give 110 percent.

“That’s how I’ll look at myself, and I let other people judge in terms of how good the performance levels are.

“But ultimately, when I go onto the pitch, something I’ve learned over the past few years from the manager is it’s not about what you can actually do as a player, it’s about what the team needs you to do, especially within certain games, and your role.

“I’ve learned that over the past few years and it’s really helped my game.”