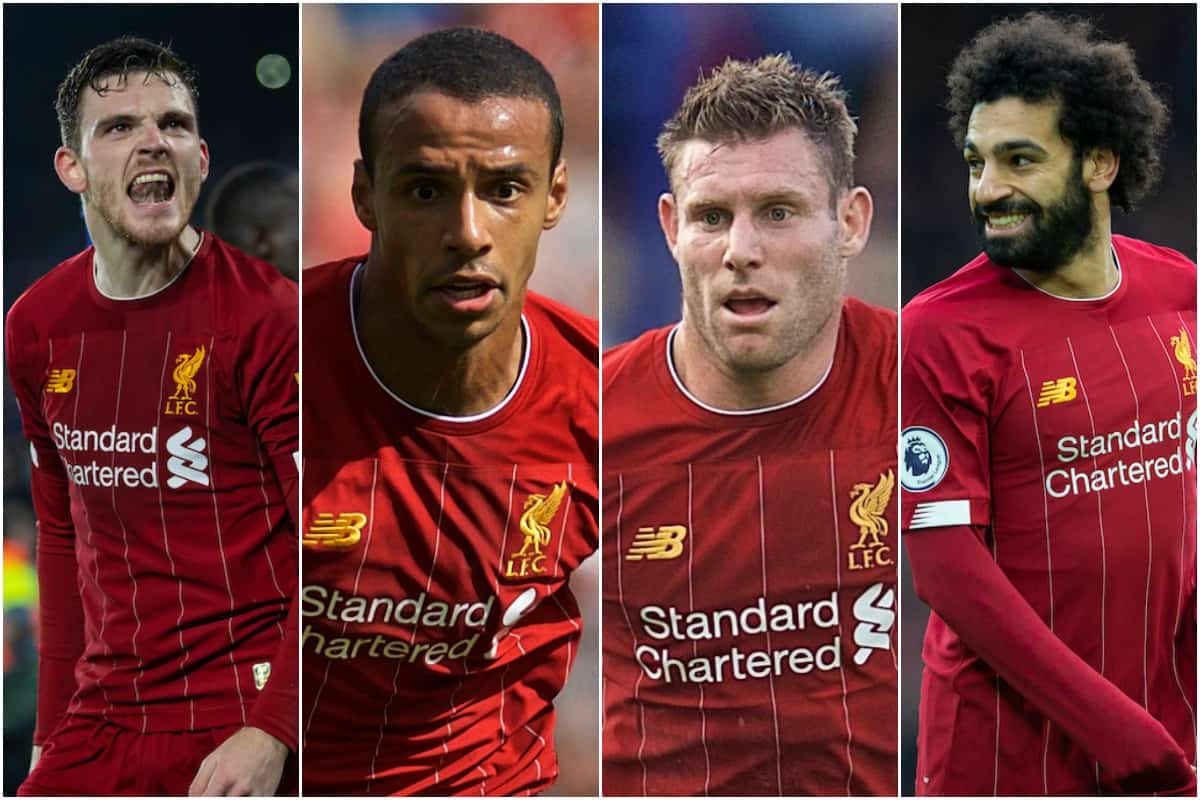 Jurgen Klopp has confirmed neither Joel Matip or James Milner will be involved against Crystal Palace, but offered welcome news on the availability of Mo Salah and Andy Robertson.

Liverpool kicked off their return to action with a goalless draw at Goodison Park over the weekend, where two key players failed to feature due to lingering complaints and a further two succumbed to injuries of their own.

The absence of Andy Robertson and Mohamed Salah were both duly noted in a clash which lacked the required attacking impetus to hurt the Blues where it mattered most.

And the former’s stand-in, James Milner, was forced from proceedings with 42 minutes on the clock with a hamstring complaint which the boss had hoped was “not serious” in the aftermath of the clash.

But he was not the only casualty as Joel Matip joined him in the treatment room in the second half after suffering a “really painful” issue with his big toe, which forced another defensive reshuffle.

The initial hope was that they would miss a single game, against Crystal Palace, and then be in the frame for the trip to Man City on July 2, and Klopp provided an update on the duo ahead of the next league clash on Wednesday.

“The two guys, Milly and Joel will not be available tomorrow. We have to figure out exactly how long it will take, but tomorrow they don’t play,” Klopp told reporters during his pre-match press conference.

“James Milner felt his hamstring, it’s not too serious. He trains 365 days a year, he came back from lockdown and could play the next day and Joel in a challenge [someone] stepped on his foot.

“There will be injuries, 100 percent, we all have to make sure the boys are in the best possible shape.”

But as expected, Liverpool are set to welcome Robertson and Salah back into the starting XI after the latter was an unused sub at Everton and the left-back failed to make the matchday squad.

“It is the same with Robbo, he trained yesterday as well completely normal, so that’s the same.”

It comes as welcome news as the duo were sorely missed in the stalemate, but with just four days separating Liverpool’s two games upon their return to action after a three-month absence, a further shuffle of the pack is likely is to avoid further injury and fatigue.

Joe Gomez, Gini Wijnaldum, Alex Oxlade-Chamberlain and Divock Origi, who all came off the bench on Sunday, could be included from the off as the Reds look to move within two points of the title.