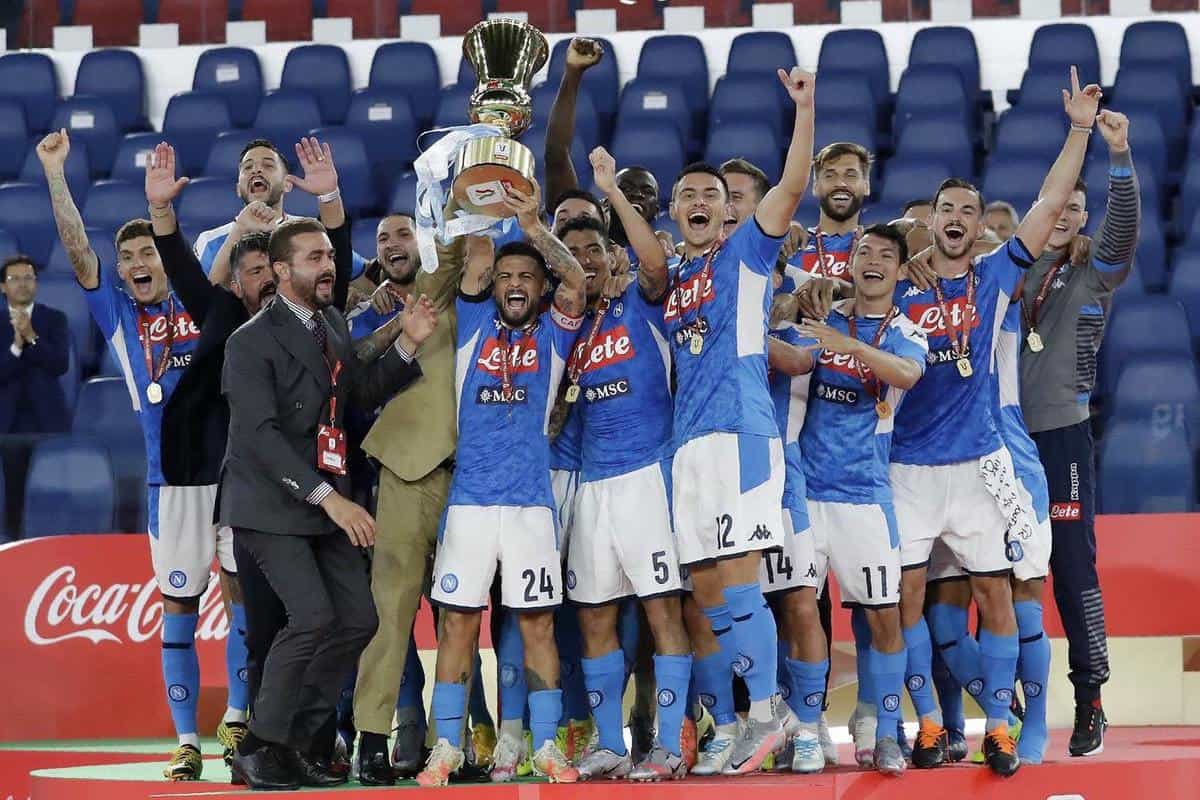 Napoli won the Coppa Italia on Wednesday night with a 4-2 victory over Juventus, and celebrating with a trophy lift they gave Liverpool an example for the Premier League.

The Reds still need six points to clinch the title following Man City‘s 3-0 win at home to Arsenal on the first night back, with their return coming in the Merseyside derby on Sunday.

If they beat Everton, it could be that Jurgen Klopp‘s side seal it at Anfield, with Crystal Palace visitors on June 26, which would be a perfect setting for the club’s first top-flight title since 1990.

But how they can celebrate their triumph remains to be seen, with lockdown measures still in place and social distancing advised whenever possible around games played behind closed doors.

Salzburg marked their win in the Austrian Cup at the end of May with a surreal trophy lift as each player was designated a spot on a temporary plinth, celebrating two metres apart.

It outlined a possible reality for the Reds, but with Napoli victorious in the Coppa Italia—on the same night the Premier League made its return—another scenario was laid out.

With all players and staff tested for coronavirus ahead of games, and therefore little to no risk of infection at grounds, Gennaro Gattuso’s squad relished a more traditional trophy lift.

Gattuso, captain Lorenzo Insigne and the rest of the squad crowded onto the platform to lift the trophy, with the only difference to a typical celebration being the absence of fans.

Many of those fans instead took in their side’s achievement on the streets of Rome, with lockdown ending in Italy on June 3 and outdoor bars now permitted to open.

Each player posed with the trophy, with many kissing it, as Napoli marked their first trophy since 2014, their first under Gattuso and their sixth Coppa Italia triumph.

It is still unclear how Liverpool plan to celebrate their imminent Premier League win, though it is likely every precaution will be taken due to the continued situation in the UK.

“If we will be champions, then whichever celebration is possible, we will do as a team, internally, and with all our supporters in the moment when it’s allowed to do so again,” Klopp told BBC Radio 5 Live earlier this month.

“Then I can promise, if it happens, there will be a parade as well.

“Whenever, who cares! We only need one day when everybody is able to come and then we will do that.”