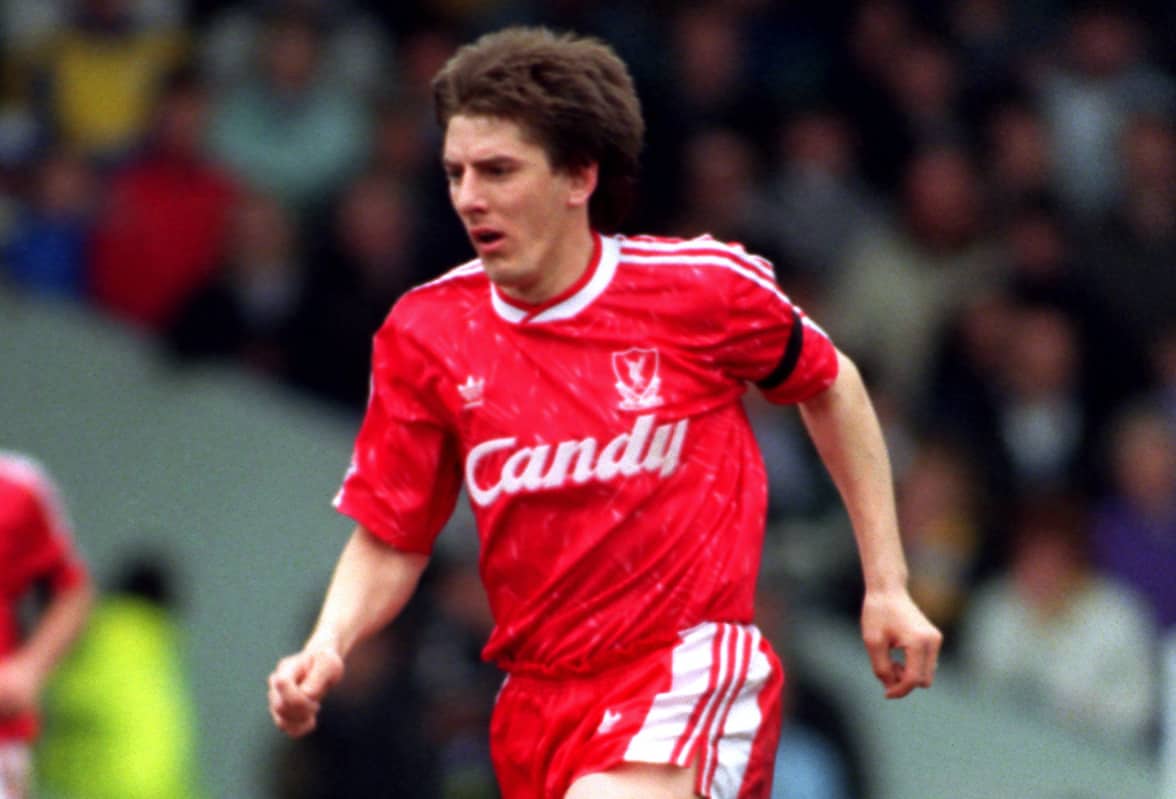 Peter Beardsley may be a controversial figure in football’s modern era, but his time at Liverpool saw an underrated gem with shades of Kevin Keegan and Kenny Dalglish.

This is my life, and this is how it reads
A documentary that nobody believes
Albert Steptoe in Gone with The Breeze
Mother played by Peter Beardsley, father by John Cleese

My Book, by The Beautiful South, taken from their 1990 album Choke. Criminally, it only reached number 43 in the UK singles chart.

While Albert Stubbins made the front cover of The Beatles’ iconic album, Sgt. Pepper’s Lonely Hearts Club Band, I can’t think of another instance where a Liverpool player, other than Peter Beardsley, was bestowed with a namecheck in the lyrics of a published piece of music.

I fell for Beardsley long before Kenny Dalglish made him Liverpool’s record-breaking £1.9 million signing in the summer of 1987.

Beardsley was a star in the making during Newcastle United’s promotion campaign of 1983/84; the team from St James’ Park garnered a lot of positive attention between 1982 and 1984.

The Kevin Keegan factor had kicked in and the interest at both a local and national level went through the roof. 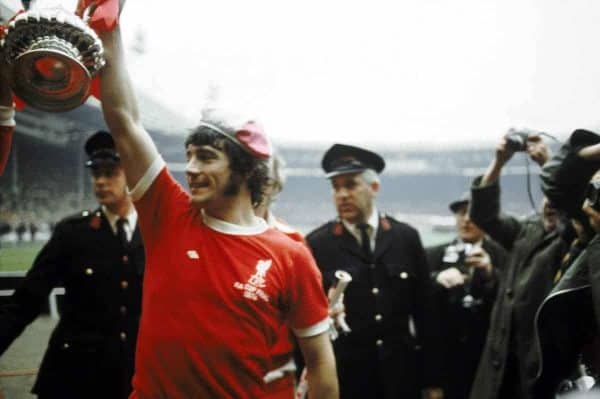 A club seemingly in a potentially irreversible downward slide of Burnley, Blackpool or Preston North End proportions, they pulled off a masterstroke when they appealed to Keegan’s sense of footballing romance—when more attractive options were available to him.

Attendances swelled on the Gallowgate end, and while the defending was still questionable at times, it was now enhanced with a gung-ho sense of adventure to attacking.

When they re-signed Terry McDermott, in the winter months of 1982/83, they went from interesting curiosity to compulsive viewing.

In January 1984 they even came to Anfield for a Friday night FA Cup third-round tie, which generated one of the finest atmospheres we’ve ever had in L4 for a domestic game of football. The BBC broadcast it live to a massive audience.

Of course, all eyes were supposed to be locked on Keegan, with the best supporting actors being McDermott and the eye-catching Chris Waddle.

Yet here was this slightly hunched oddity, with a low centre of gravity and bewitching close control, that would constantly draw my attention. A natural heir to Keegan, but a player that had more in common with Dalglish. 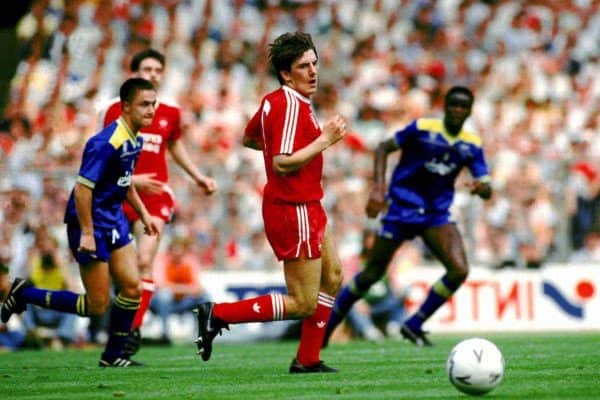 Beardsley felt like a Liverpool player years before he signed on the dotted line.

I would grab any opportunity to watch him when Newcastle appeared on my television screen, while that lack of fulfilment of watching England play took an upturn when he broke into Bobby Robson’s squad in the buildup to the 1986 World Cup finals.

A magnificent performance against the Soviet Union cemented my feelings. Beardsley needed to be a Liverpool player.

Sat on the bench for the first two England games in Mexico, while Mark Hateley floundered, Beardsley had been restricted to 10 minutes at the end of their loss to Portugal.

On the brink of exiting the tournament, he was brought in against Poland, where his international partnership with Gary Lineker was set in stone.

It took another year for Liverpool to finally land him, but I was as delighted with the signing of Beardsley as I was that of John Barnes—another player that would bring me reluctantly to a television screen if England were playing.

It seemed obvious that Beardsley was made for Liverpool.

Eclipsing Barnes’ transfer fee by £1 million, Beardsley was initially damned by the extent of the cost Dalglish paid for him, and it made for an uneasy start.

Beardsley mingled effortlessly upon his debut at Highbury, but Barnes got off to a phenomenal start. As good as Beardsley performed in those early weeks, Barnes was simply sensational, and at less than half the cost.

However, the Barnes-Beardsley-Aldridge triumvirate clicked perfectly, and 1987/88 was stunning. Beardsley was soon proving his worth and his third-eye intelligence began to reap some world-class performances.

Against Arsenal at Anfield, he was unstoppable; anybody associated to Nottingham Forest in 1988 will still wake in the middle of the night at the flashbacks of that iconic 5-0.

Despite Barnes stealing the show, it seemed apt that Beardsley scored the goal that clinched the league title, while he was one of the very few Liverpool players to perform to their natural level in an abysmal FA Cup final against Wimbledon.

If only his disallowed goal, at 0-0, had been permitted to stand.

From the eve of the 1988/89 season, the landscape favoured Beardsley that little bit less. The return of Ian Rush upset the equilibrium of the Liverpool team.

The return of our prodigal son from Juventus was initially celebrated, until the mathematics of converting three into two was pondered.

For much of the campaign, illness, fitness and the form of a motivated Aldridge kept the Barnes-Beardsley-Aldridge link intact, but it was on borrowed time. By the autumn of 1989, Aldridge was gone.

Ultimately, Barnes linked well with Rush, better than Beardsley did; yet the three, as a triumvirate, were never as effective as it had been with Aldridge.

While Rush and Aldridge were said to look alike and score alike, the truth is that they were very different in their approach to scoring goals.

Aldridge was the classic penalty-box poacher, thriving on the ball played in to feet, making instinctive decisions, while Rush was at his best when chasing a ball played centrally, which allowed him more thinking time.

It is no coincidence that Beardsley linked so well with strikers like Aldridge and Lineker, but less so with Rush.

During his last two seasons at Liverpool, he would often be sacrificed in the name of tactics, or a change in formation. In 1990/91 especially, his brilliant form wasn’t always enough to maintain a place in the team.

He was incredible against Man United in the 4-0, yet he didn’t even make the bench at Highbury, on a day we were dismantled 3-0—a game that arguably marked the day the entire season was deflected in another direction. 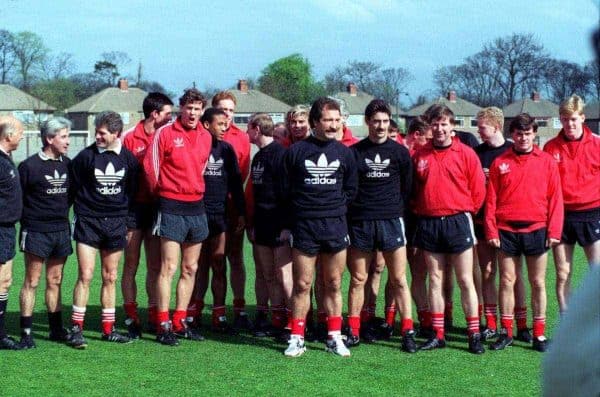 By the end of the season, the title was relinquished, Dalglish had stunningly walked away from the club and Beardsley would soon be allowed to cross Stanley Park to sign for Everton.

Graeme Souness didn’t really give Beardsley a chance. He looked at the age of the player, he looked at the size of the bid Everton had made and he opted to take the money and run, given he had just paid an indecent amount for Dean Saunders.

It was a switch of players that was as mind-boggling then as it is now.

Beardsley remained a top-flight footballer of substance for another six years beyond his departure from Liverpool. A man allowed to leave way too early.

Just imagine a world where Beardsley had stayed at Liverpool, just think what he could have done alongside Robbie Fowler, rather than at Newcastle alongside Andy Cole and, later, Les Ferdinand.

Maybe he could have helped make the 1990s a far more appetising decade at Anfield.