Jurgen Klopp has made no changes for tonight’s clash with Man City at the Eithad, which serves as Liverpool’s first game since taking the title from their hosts.

The Reds are now champions of England, and hearing that will never grow old.

But less than a week after being crowned, Klopp has tasked his side with renewing their focus as they set their sights on victory over City.

Pep Guardiola’s side followed up their decisive 2-1 loss to Chelsea with a 2-0 win away to Newcastle, but Liverpool will have resolved to present another setback for last season’s champions.

With Klopp targeting an all-time record points tally in the Premier League, he has named a strong side in Manchester tonight.

Alisson starts in goal, behind a back four of Trent Alexander-Arnold, Joe Gomez, Virgil van Dijk and Andy Robertson, who all keep their places following an eight-day break between games.

Fabinho will anchor the midfield, to be joined by Jordan Henderson and Gini Wijnaldum.

And in attack, Mohamed Salah can continue his push for a third consecutive Golden Boot as he lines up alongside Sadio Mane and Roberto Firmino once again. 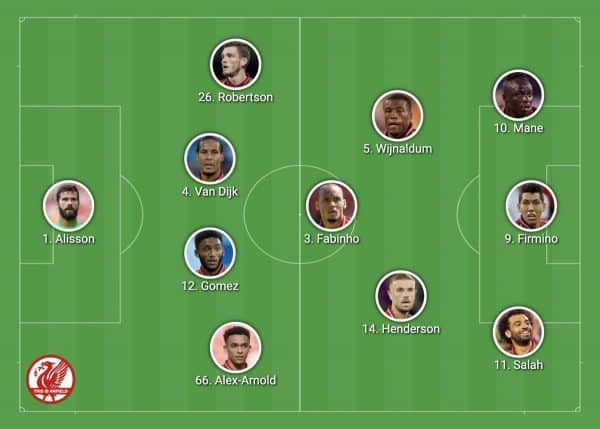 Among Klopp’s generous reserves are Neco Williams, Curtis Jones and Harvey Elliott, with the manager likely to hand opportunities to youth in the final seven games of the season.

Whether that will come against City depends much on how the game pans out, but while the title is already Liverpool’s, there should be no sign of complacency at the Etihad.

There is no centre-back on the bench for the Reds, however, with Dejan Lovren absent and Joel Matip to miss the rest of the season through injury.