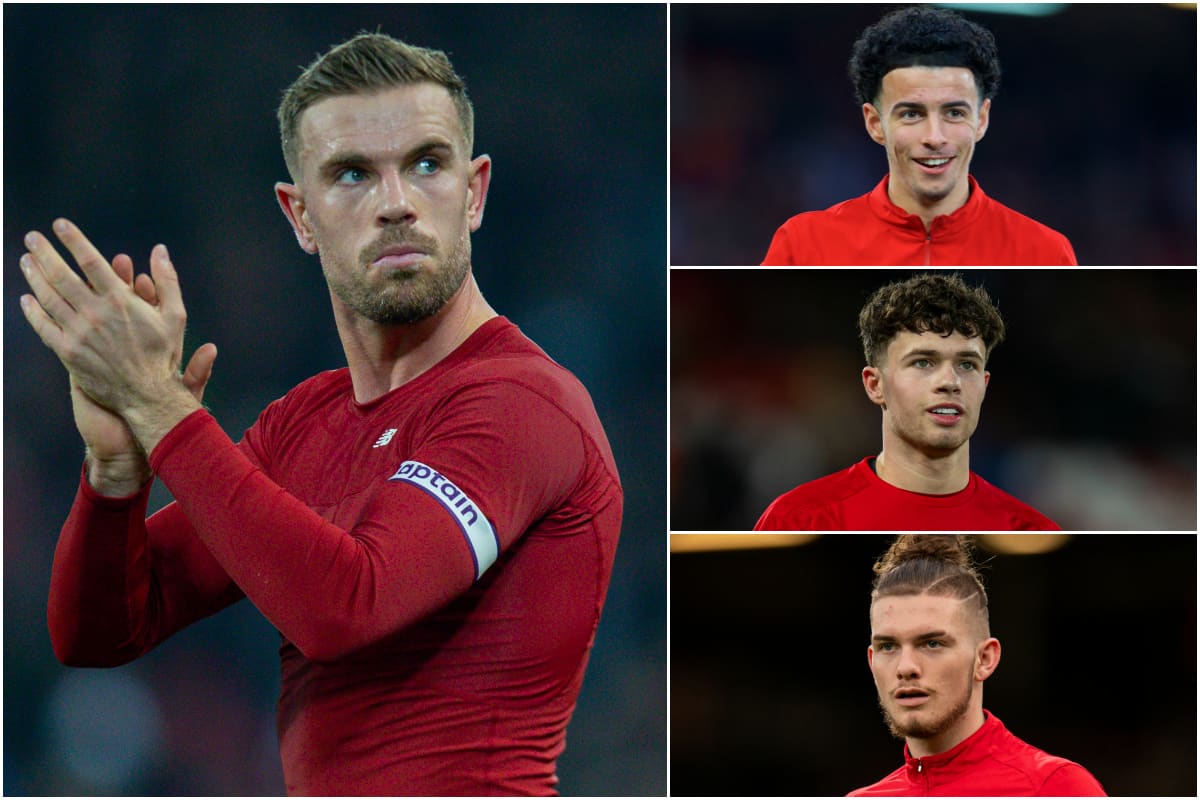 Jordan Henderson has praised eight youngsters who have joined Liverpool training and “shown they understand what is needed,” including the “frightening” Harvey Elliott.

The Reds’ core squad has been bolstered by a number of talented academy players this season, with Jurgen Klopp keen to promote from within whenever possible.

This has seen Curtis Jones score his first Premier League goal and Neco Williams make his full league debut in recent weeks, while Elliott has been a regular in matchday squads.

Henderson, in his programme notes ahead of Liverpool’s clash with Burnley, highlighted the trio along with five others who have impressed him with their quality and attitude this season.

Kicking off with Jones, he described the 19-year-old as someone who “wants to be better every day,” explaining how this means not only on the pitch but “in every aspect of being a professional.”

“If he keeps that attitude of making sure improvement and learning is his number one focus, he really can achieve anything he wants,” the captain said.

He gives the same advice to Elliott, whose “talent is frightening,” saying “ability gets you so far and then mentality and attitude have to match it.”

Henderson continued that “you will not meet a nicer, more grounded lad than Harvey off the pitch and he fits in perfectly to the culture we have in our dressing room.”

The midfielder believes Elliott has “won the lottery” when it comes to the dressing room he is working in, but acknowledges that, having only turned 17 in April, he needs to be given “space and time to grow.”

On Williams, who appears to be settled as backup to Trent Alexander-Arnold and, potentially, now Andy Robertson, Henderson says “he’s a crucial member of this squad now and his development is really exciting.”

Importantly, he claims the Welshman’s “attitude and application is elite,” which is repeatedly emphasised as key to making the grade at a club like Liverpool.

Friday marked five years since Henderson was named Reds captain, but he has been with the club for over nine years now, and was once in a similar position to these young players.

It is this that makes his advice so invaluable, and that extends to the five others he name-checks as having made an impact on him in training.

“Leighton Clarkson, Jake Cain and Yasser Larouci have shown superb quality as part of our group,” he added.

“Caoimhin Kelleher likewise with the ‘keepers, he’s been brilliant.

“All of these lads show they understand what is needed to be part of this group and contribute.

“Most recently we’ve had Paul Glatzel back in full training and everyone is made up about that.”

Glatzel has missed the majority of the campaign having suffered an ACL injury in the pre-season win at Tranmere last summer, but Henderson’s believes the way he has responded shows he “has the mentality that says to all of us he is going to have a big career.”

While it would be rare to see all eight of these players break through and establish themselves as genuine options for Liverpool in the long term, it is not often a group with such talent and resolve steps up.

With Klopp vowing that “the door is really wide open” for youth, and now the captain reinforcing this message, it will be interesting to see how they develop in the coming years.