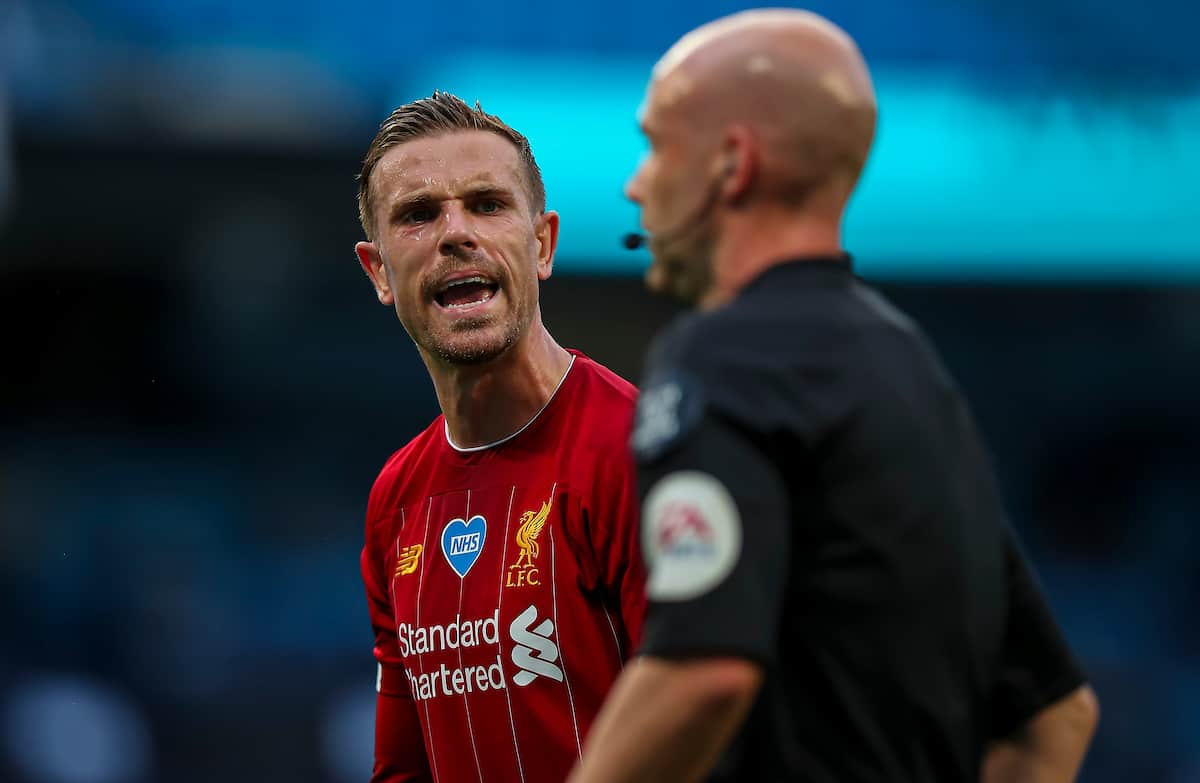 Liverpool fell to just their second defeat of the season at Man City, and while fans were disappointed with the performance the Reds still hold a 20-point advantage.

Liverpool’s first outing as Premier League champions saw them meet the side they took the crown from, with Jurgen Klopp‘s men were not the ones making the statement of intent.

One soon became three as the Reds’ rash defending proved costly, as did the lack of a clinical edge which the hosts had in spades.

The fourth was added after Alex Oxlade-Chamberlain bundled the ball over his own line to see Liverpool’s lead at the top of the table move to just a staggering 20 points.

Reds welcomed the guard of honour, but City certainly did not overextend themselves…

The guard of honour. You love to see it ?

Guard of honour not too far away now. To be fair, does anyone really care? I know I don't ????

Not enough effort in that clapping imo

You wouldn't class that as thunderous applause for the champions…..

Really put their backs into that applause Man City, didn’t they?

It went downhill from there, however, with Gomez not showering himself in glory…

Don’t really know how you can claim that’s not a pen. Soft? Yes. But poor from Gomez.

Both were at it, let’s be clear. Sterling went down very easily.

“Soft penalty but that’s so naive Gomez.” – Iluvatar
on the forums.

Lack of composure from Gomez there, we haven’t seen that much this season. Can’t argue with the decision.

Joe Gomez had a stripe before this?

But, ultimately, it was an outing where few shined & there were mixed reactions to the performance…

Robertson has a can of cider waiting for him at half time. He’ll cure himself and he’ll be grand

Joe Gomez has been poor, but Robertson has had an absolute stinker on the left. Haven’t seen him be this rash in a long, long time.

I've waited 30 years to watch a Liverpool team drunk on ale having spent a week celebrating the title and, I have to say, it's totally living up to expectations.

Sorry just embarrassing. Team needs a kick up the arse.

“Fucking poor that. No midfield, defensive brainfarts and another game where we look like we could play all night and not score.”

One team has taken their chances, the other hasn’t ?????

thank fuck Liverpool won the league before this

While the defeat hurt, fans remained in high spirits as it did not change the fact Liverpool are Premier League champions…

*but a side that finished 20 points behind them beat them in a match that didn't matter.

All of those nervous nellies who were saying all winter that Liverpool had it in them to fall apart at the end of the season…maybe they were right. Guess we have to win it with 7 to go every year. pic.twitter.com/ZmvRO6zNAU

Right.. back on the pints then Liverpool. Whose round is it?

Gonna be Liverpool's first defeat as reigning champions since Arsenal away in December 1990 when Dalglish picked six defenders. Could have done with a few extra tonight tbh.

Oh dear. For a second I was sad but then I realised we’re Premier League Champions and now I feel good.

Liverpool's lead cut to 20 points, a margin bigger than any final gap between first & second in top-flight history #KloppOut

Didn’t cover ourselves in glory there and while it’s annoying our max points tally is now capped at 104…I certainly won’t be losing sleep over the result.

We’ll learn from it and I feel Villa will feel the brunt of it.

6-0 win against Villa incoming this Sunday.

Think Villa will be In for a hiding at the weekend.

Well, that was a waste of time. Pop a couple of Advils, sleep it off, and go make Aston Villa cry.

Ah well. Shit tonight. But we’ll roast Villa Sunday to make up for it. Up the mighty reds. Campione Campione ole ole ole ???????