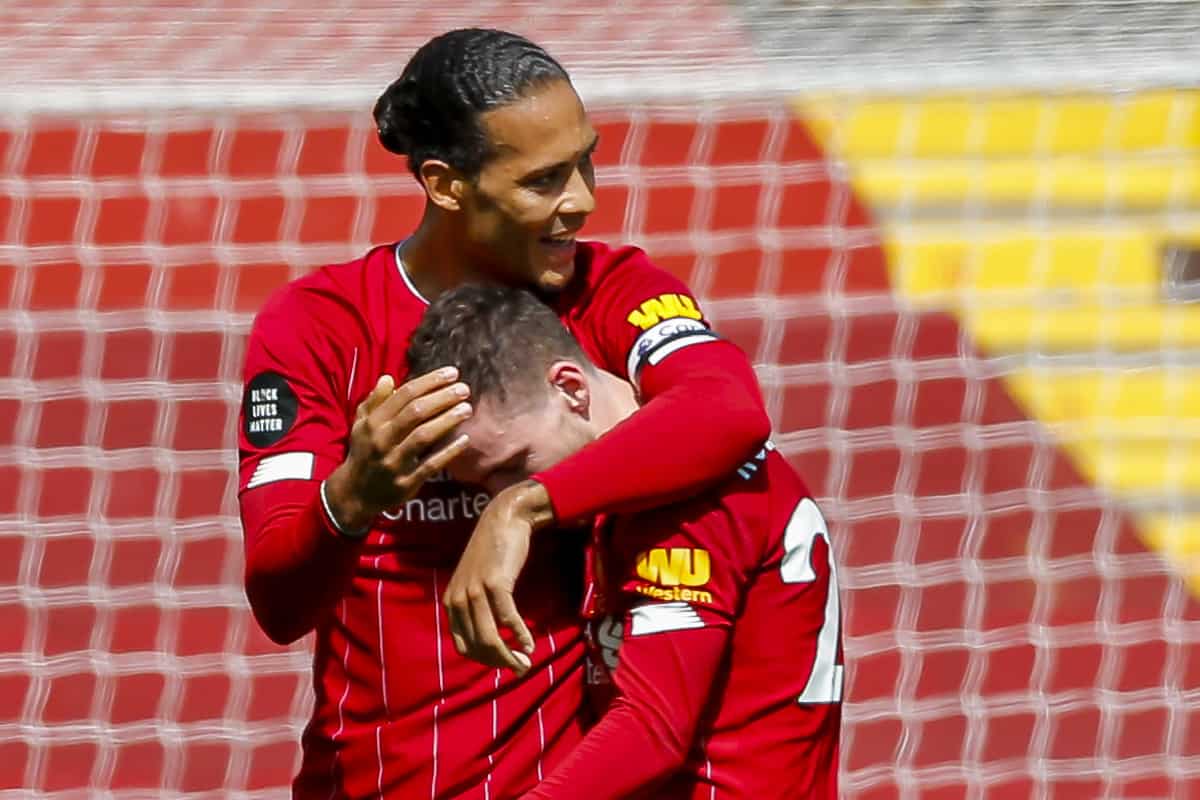 Liverpool finally dropped points at Anfield in the Premier League, as their 17-game winning run came to an end with a disappointing 1-1 draw with hardworking Burnley.

Despite the Clarets’ impressive run of form since the restart, when the two sides lined up for kickoff—following another guard of honour for the champions—the hosts were strong favourites.

But as expected, Burnley made it difficult, and after Andy Robertson‘s brilliant header broke the deadlock things opened up more for the visitors.

Liverpool still had their chances, but the decisive goal ultimately came from Jay Rodriguez, firing home after a knockdown in the penalty area to erase the perfect record.

It was a strange performance for a Reds side including Neco Williams and full league debutant Curtis Jones, as though they dominated for much of the game they were certainly left wanting in key areas.

Here we compare our player ratings with those from the Liverpool Echo, Sky Sports, ESPN, The Redmen TV, FotMob and the TIA readers: 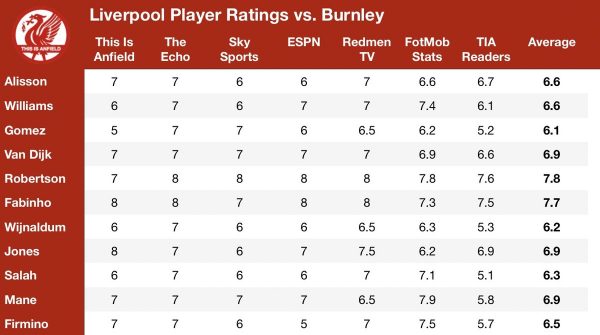 Unsurprisingly, the standout performer was Robertson (7.8), whose goal was would have fit in perfectly with the Downing-Carroll dynamic of 2011/12—only it was scored by a 5’10” left-back.

His display comes as an encouragement after a worrying run in the immediate aftermath of the title win, and there appears to be no loss of hunger in the Scot as he rampages down the flank.

Just behind Robertson in the average rankings is Fabinho (7.7), who controlled the game from his deep-lying role.

The Brazilian’s display did not warrant a draw, as he tackled, intercepted and passed with conviction and quality as his post-injury concerns have now faded.

There were reasonable scores for Williams (6.6) and Jones (6.9), reflecting promising showings from the young duo, while Sadio Mane (6.9), Virgil van Dijk (6.9) and Alisson (6.6) all came away with credit.

Less impressive, however, were the performances of a shaky Joe Gomez (6.1), an initially busy but ultimately lacking Gini Wijnaldum (6.2) and a misfiring Mo Salah (6.3).

While Klopp is unlikely to make major changes to his side for the trip to Arsenal in midweek—with his strongest side expected at the Emirates—he will be looking for more cutting edge in the final third.