Harvey Elliott has explained how his upbringing playing on concrete at a local cage pitch in London has shaped him into the robust and hardworking player he is today.

Though he is not built like a typical Liverpool midfielder, Elliott is one of the most popular youngsters among Jurgen Klopp and his backroom staff.

Pepijn Lijnders, for example, recently described the 17-year-old as being “like a little diamond,” telling Goal that “he’s cheeky but at the same time he’s responsible.”

Unlike most other young players breaking through at Anfield—including Trent Alexander-Arnold, Curtis Jones and Neco Williams—Elliott is neither tall nor particularly pacy.

But he is able to thrive in Klopp’s system due to his tenacity and technical quality, with the teenager a fearless talent who could shine in a variety of roles.

Speaking to the Liverpool Echo on the release of the Reds’ new Nike home kit, Elliott recalled how his early days playing on concrete allowed him to keep up among taller, stronger opponents.

“There was something we called ‘The Cage’ near where I lived, and every Thursday at 6.30pm we’d go over to this cage, which had a concrete floor,” he explained. 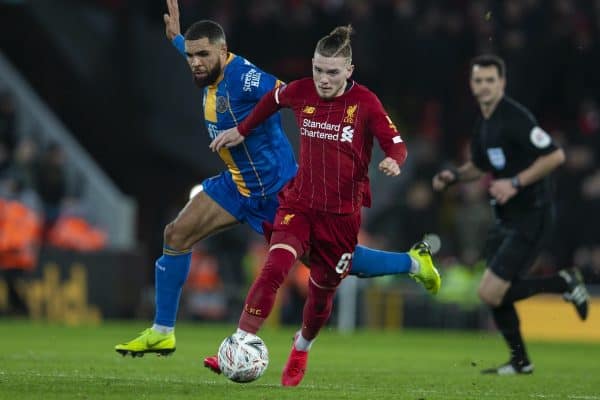 “We’d have teams of five or six, but most of the other boys were two or three years older than me.

“Getting smashed around on concrete wasn’t pleasant, but it has helped me a lot throughout my career, particularly when I’ve come up against older players.

“It has helped me know when to protect the ball, when to release and when to dribble.

“Even at Fulham, I was playing for the under-18s at 14 or 15 years of age. I was playing against some nearly fully-grown young men and I was still a young kid.

“My decision-making needed to be on point, and that’s all helped.”

There is certainly a strength to Elliott’s game that belies his diminutive stature, and this will be boosted by hours in the gym at Melwood as he follows the example of the likes of Mohamed Salah and Sadio Mane.

Having impressed against the likes of MK Dons, Arsenal, Everton and Shrewsbury last season—and showing no fear in squaring up to Benfica’s hulking goalkeeper Leobrian Kokubo in the UEFA Youth League in March—he has outlined his battling qualities.

It would be remiss to overlook how formative these experiences are for young players, and how important facilities such as cages are for communities.

They clearly play a big part in the development of players like Elliott, who has been able to translate his natural abilities from concrete to the state-of-the-art turf at Melwood.