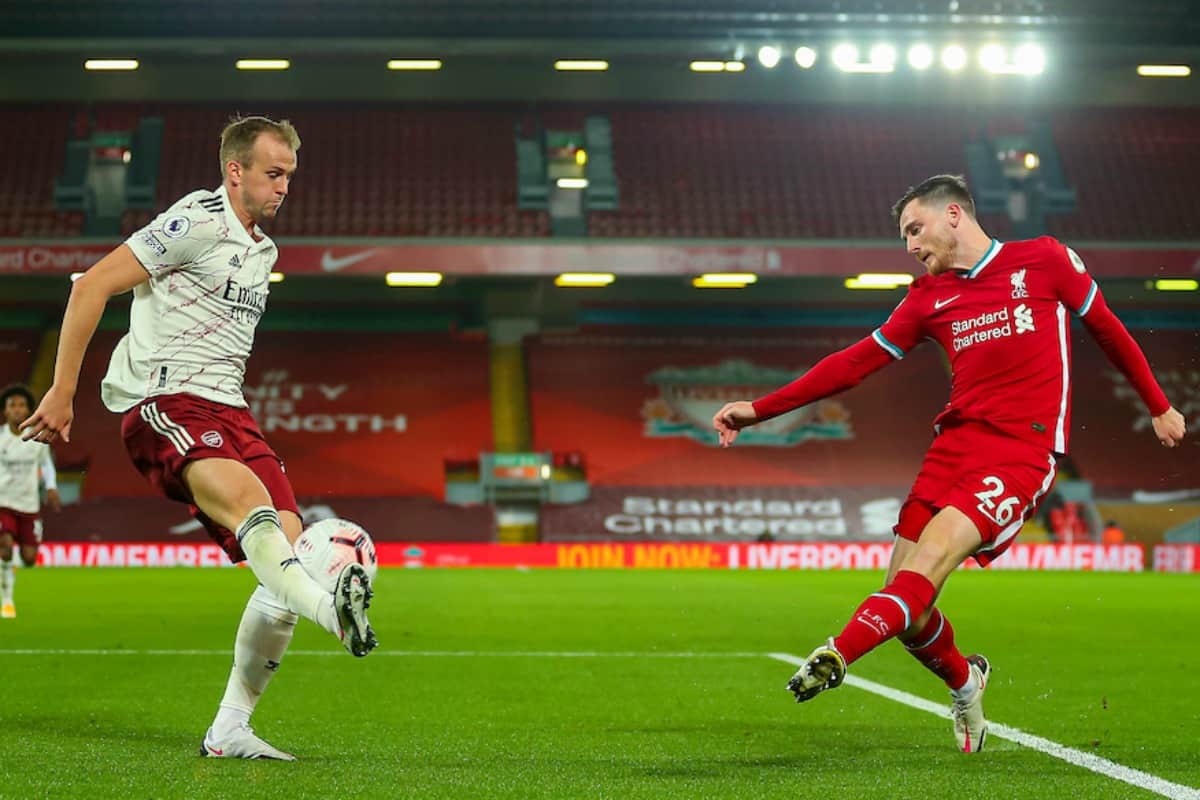 Andy Robertson made note of his own personal development in the mentality stakes after swiftly “dusting off” his error at the back to score at the other end in Liverpool’s win.

A lot has been made of Liverpool’s exponential growth under Jurgen Klopp, and rightly so, with a soft underbelly replaced with a fierce mentality which has taken them to the top of club football.

And Robertson is one of the many success stories in the dressing room at Anfield having risen to the top echelon of players in his position since his arrival in the summer of 2017.

Against Arsenal, the left-back was at the centre of a calamitous clearance attempt which led to the visitors hitting the scoreboard first through Alexandre Lacazette, only for the Scot to strike back with a goal of his own nine minutes later.

The goal, for Robertson, was proof of his ability to mentally flick a switch and start afresh after an early error, something he may not have been able to put to the back of his mind as quickly a few years ago.

“I thought Virg was about to clear it and he stuck out his big size 12s and he missed it! But 99 out of 100 times I clear it and unfortunately it dropped right to Lacazette,” Robertson told Sky Sports.

“It’s a scruffy finish and Alisson is kind of hanging on but it’s my big mistake.

“But the lads dug me out of a hole and luckily I could provide something at the other end as well.

“Maybe a couple of years I would have let it get to my performance and dwell on it, but I dusted it off quite quickly and luckily managed a positive reaction up the other end.

“I was desperate to score, you’re always desperate but when you’ve made a mistake as a defender you want to put it right.”

On the whole, Liverpool’s performance was one to be commended with the Gunners having little time to settle amid an onslaught of pressure off the ball from Klopp’s men.

While the scoreline flattered the visitors for most of the match, the Scot felt there was little to complain about, aside from his “assist at the wrong end”, as the 100 percent record to start the season continued.

“It was a fantastic counter-pressing game from us,” Robertson added. “When we lost it I think every single one of us reacted in a positive way and we managed to put them under a lot of pressure which forced them into mistakes.

“It was an all-round good performance without the ball and then with the ball, we showed our qualities as well.

“I don’t think we can have too much to complain about… apart from my assist at the wrong end!

“But the reaction after that was fantastic. It’s never easy going behind against a really good team but we showed a positive reaction.

“I thought we dealt with their [front line] quite well, we caught them offside quite a few times and the ones that we didn’t we reacted quite quickly.

“Defensively it was quite a strong performance from us and going forward we could have had a couple of more but it’s always nice to beat one of your rivals and keep the 100 percent start going.”