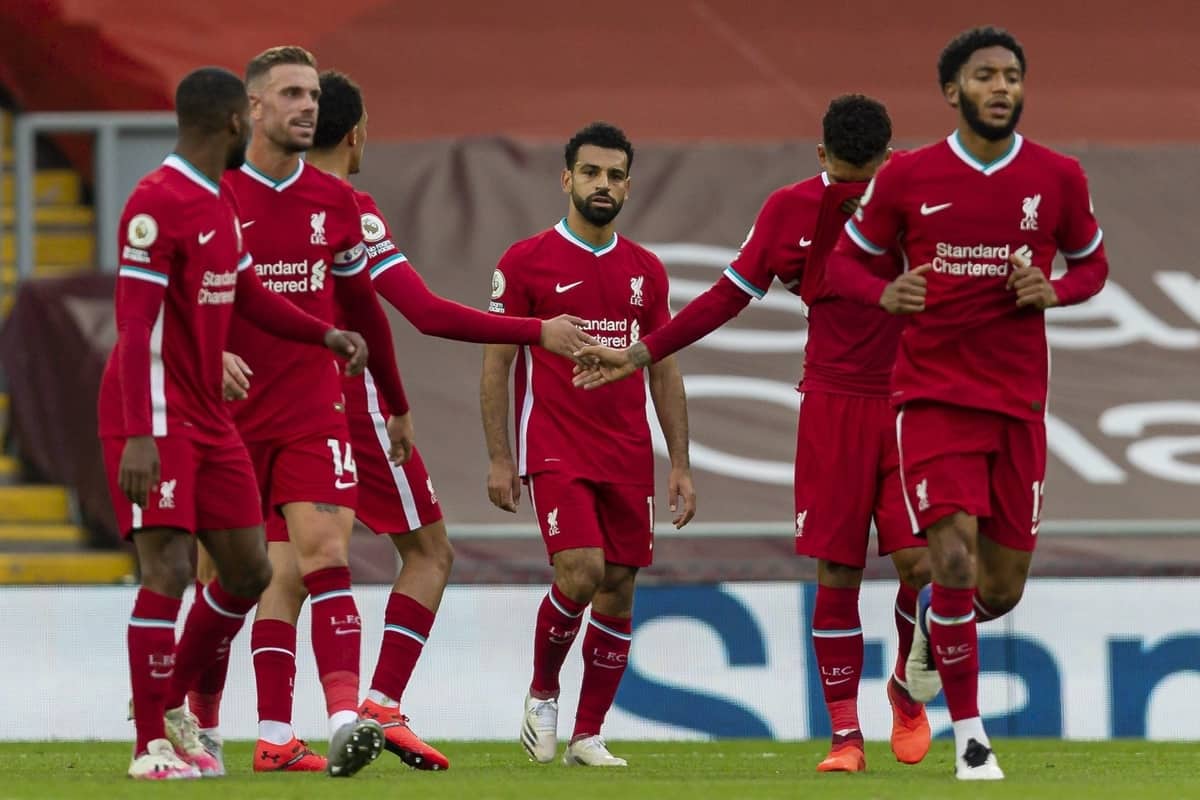 It was a “tough” opening day for Liverpool as they edged a seven-goal thriller against Leeds, with Mohamed Salah the match-winner as the champions started their defence.

It’s not an opening day clash which will be forgotten any time soon as the Reds reacquainted themselves with a flair for the dramatics as the newly-promoted Leeds rolled into town.

There was hardly time to breathe in the opening 45 minutes as five goals found the back of the net in what was a display pitting one error-ridden defensive performance against another.

A handball in the box paved the way for Salah’s opener before Jack Harrison pegged one back after a lapse at the back, before Virgil van Dijk restored the lead and then subsequently gave it away with a poorly judged clearance into the path of Patrick Bamford.

A second for Salah, a rocket into the top corner, would re-establish Liverpool’s lead at the break and while there were chances to add a buffer, Leeds were next on the scoresheet to equalise for the third time.

And while Marcelo Bielsa’s men had been quick to put out a statement of intent they did start to flag late in the piece and after a host of missed chances, another penalty would be cooly dispatched by the No. 11 to seal his hat-trick and the first three points of the season.

It was a night to remember for Salah, far and away Liverpool’s top performer and while he was “happy” about the win, when speaking to Sky Sports, the focus was on the required improvement as a defensive unit after Liverpool conceded three goals for the fifth time in 2020:

“It’s a good start for us. A tough team, they press high as well, so the intensity was really high. We had a good game.

“We shouldn’t have conceded three but this is the game, we have to react for that and we did a good job.

“They had a great game. There’s no fans but they play, they react really well and they scored three goals against us – that’s huge.

“I’m happy about the result and we have to keep on improving and try not to concede as many goals.”

And for the man between the sticks, the Reds’ response was worthy of praise as Leeds refused to back down and the champions stood up to the first test of the campaign.

Alisson, when speaking to LFCTV, also made sure he praised the efforts of the hat-trick man:

“Definitely [three hard-earned points]. The team did really well, a good response for the first match of the season. It’s not easy against a tough opponent but we did really well.

We knew what we were waiting for, their attitude in the match – I think they are a really good team with good quality but with a brave heart also, so they made our night difficult.

I’m happy to have Mo Salah on the team, that he scored a hat-trick in the first match of the season so I’m really happy for the three points also.”

And there was a sense of relief and jubilation for Reds after the game as they took to Instagram to celebrate a hard-earned three points.

For the skipper, it not only marked a “great start to the new season” but it was also his first competitive appearance since injuring his knee against Brighton on July 8:

Tough game but great to start the new season with 3 points!! #YNWA

It was a case of “job done” for Naby Keita, Gini Wijnaldum and Fabinho, with “a big win” ensuring Liverpool got their title defence of to the best of starts, even if it was a little dramatic:

Job done, great to kick off the new season with our first win ??? #premierleague #lfc

There was no hiding from the crazy and “eventful” affair against a “tough” opponent, one which has ensured Liverpool have plenty to learn from for Trent Alexander-Arnold, Van Dijk and Joe Gomez:

Well well that was eventful! ? Loads of things that we could take from the game, postive and negative. Glad to get the win and contribute with my first goal of the season! ?

Tough game against a good side. A lot to take from it, but most importantly 3 points? #LFC

And for Andy Robertson and James Milner, it was a case of “thank god” for Salah after his match-winning heroics, while the latter also praised his former club who also have plenty to look forward to this season:

Thank god for this man. Great to be back!!! #YNWA

Ultimately, it was a stern test for Liverpool and one which should hold them in good stead for the season to come with plenty of lessons to be learned from the wild clash – especially at the back.

And they’ll be presented the chance to right their wrongs and add another three points to their tally when they meet a much-changed Chelsea side next Sunday afternoon.