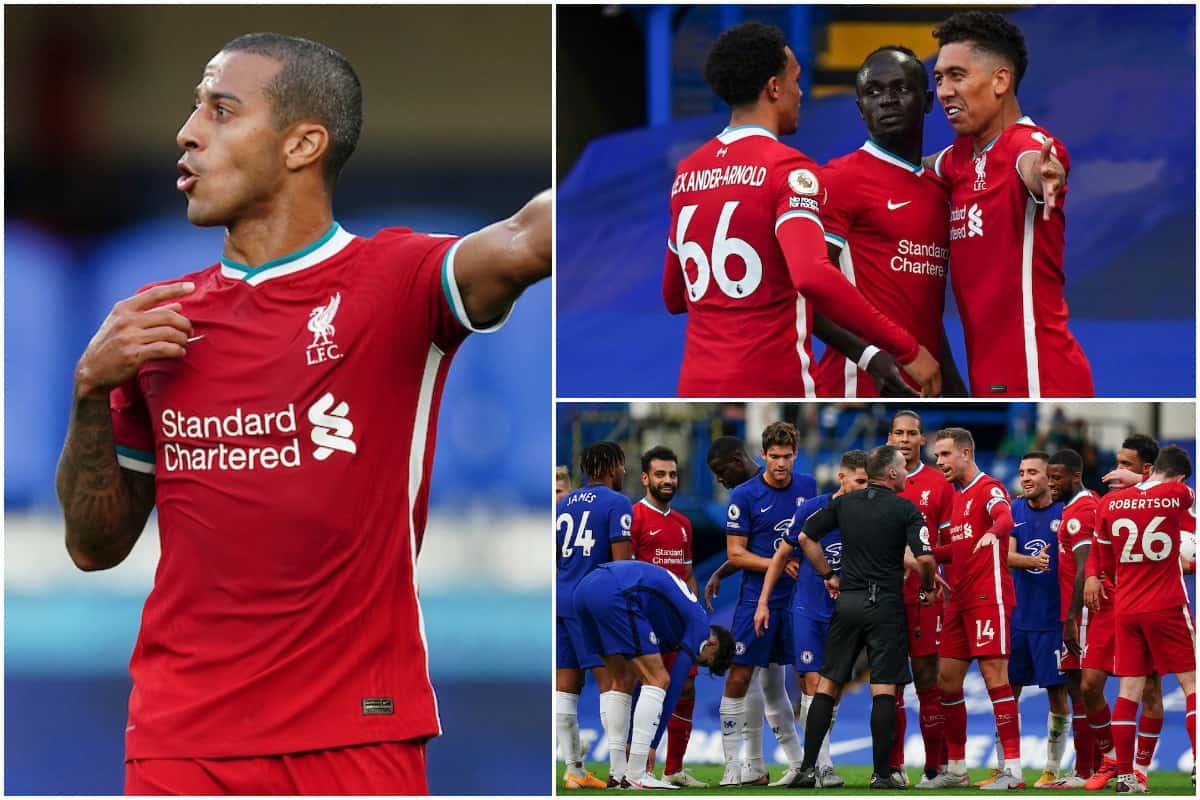 Liverpool secured their first three points on the road in emphatic fashion, where a 2-0 win over Chelsea saw a number of Reds thrive alongside a memorable debut from our No. 6.

Jurgen Klopp‘s side were wild for their opening day win, but at Stamford Bridge their composure was back at the fore as they comfortably dispatched the Blues.

A Sadio Mane double within four second-half minutes set an unassailable target for a 10-man Chelsea, while Alisson denied a consolation from the spot late in the piece.

It was an important three points to add to the tally and a memorable outing as Thiago made an immediate impression on debut, setting tongues wagging for what is to come.

Here, This Is Anfield’s Joanna Durkan (@JoannaDurkan_) and Henry Jackson (@HenryJackson87) are joined by Keifer MacDonald (@KeiferMacd) to discuss the positives and the, very few, negatives from Liverpool’s victory and the debut of Thiago.

KEIFER: I think if today’s game did anything, it showed the exactly why Liverpool have done the business they have this summer.

Fabinho was absolutely fantastic! I, like many, found myself slightly more nervous as the team news was announced. No Gomez, No Matip – Fabinho it was.

It’s worth remembering that Fabinho hasn’t been the same player since his injury against Napoli last winter. Once the face of consistency for Klopp’s side, he’s struggled to string together the strong performances we got used to seeing from him in 2018/2019.

Even when he was needed to deputise at the back at Wembley last month, it was a worrying sight. But he absolutely marshalled the defence and more importantly, he had Chelsea‘s Timo Werner in his sight all afternoon.

It was a rather impressive display that took many by storm and showed exactly why Klopp won’t be dipping into the transfer market again this summer- for a centre half that is.

It was also nice to see VAR be used in a positive way for a change, although the original decision from Paul Tierney was poor, to say the least. It was to be in favour of robotic technology for a change.

Oh and Alisson saved a penalty, 2020 is getting crazier by the week!

HENRY: First thing’s first, what a victory! Liverpool controlled the game throughout, and while they weren’t creating much before the sending off, I always had total faith in them winning the game.

Chelsea may not have had all their new signings playing, or Christian Pulisic, but the Reds showed the gulf in class between the two teams, and why the Blues are not a genuine title threat this season.

In terms of performances, like Keifer, I thought Fabinho was outstanding at centre-back, robbing Werner a couple of times and generally looking like he has played in that position for his whole career. He’s such an intelligent footballer.

Mane was also superb, doing brilliantly for both goals in their own separate way, and I thought Jordan Henderson was the pick of the midfielders before he went off, producing a stunning pass to Mane which led to the red card.

Then there’s Thiago – my word what a player. From his first touch onwards he was a joy to watch and it genuinely feels like Liverpool have signed someone who could have a Virgil van Dijk-esque influence if he can stay fit. Along with Kevin De Bruyne, he is the world’s best midfielder.

All in all, a great day at the office and further proof that this side are going nowhere.

JOANNA: I can only agree with what both Henry and Keifer have said in relation to Fabinho, he was superb and shut Werner down at every opportunity.

I was one who was on the pessimistic side when I saw the lineup up, as like Keifer noted, Fabinho hasn’t been firing on all cyldiners and I was fearful he would be caught on his heels – but boy was I happy to be wrong.

The centre-back situation still doesn’t sit well with me, we definitely need another, but Fabinho deserves all the plaudits he’s receiving.

Mane’s performance was just as noteworthy and his second goal epitomised all that Klopp has instilled in this team, and I must also apologise to Alisson for doubting his ability to save that penalty.

And after the chaotic nature of the game against Leeds, this was much easier on the heart and it was pleasing to see the team respond and give little leeway to Chelsea – a composed performance which will provide another welcome confidence boost.

The not so bad…

KEIFER: The only disappointment to come out of the game was the injury Henderson suffered. Hopefully, as Klopp suggested, it’s a precaution rather than another setback.

It doesn’t come as a shock though, due to not playing any pre-season matches and being thrown straight back into the deep end – starting both of Liverpool’s fixtures so far this season.

HENRY: There wasn’t much to be unhappy about it – why would there be when you’ve gone to Chelsea and cruised to victory?

I think Roberto Firmino is well short of his best at the moment, however, even though he registered an assist. His touch just isn’t quite there and he isn’t providing his usual movement and all-round impact. It will return, though.

Naby Keita was fine, but considering the hype that continues to surround him, I still find myself wanting a little bit more, especially when you look at what Thiago did straight away.

Keita did his job in solid fashion – that might be all Klopp wants from him to be fair, like Gini Wijnaldum – but didn’t Liverpool sign more than just that?

JOANNA: Not too much to pick at here, thankfully. But let’s hope Henderson’s withdrawal was just precautionary.

No performance warranted any real scrutiny, and the only thing I would say, like Henry, is that Firmino is ever so slightly off the boil compared to his impeccable standards.

And how the referee initially deemed the challenge which would have looked at home on a rugby field as the last man was a yellow card is beyond me, but at least the right decision was made in the end – the use of the screens has been a major positive across the league so far.

And it was only for 45 minutes, but what did you make of Thiago’s debut?

KEIFER: I think I’m already more emotionally attached to Thiago than what is good for my health. He was fantastic, wasn’t he?

The way he just glided about the pitch, dropping his shoulder every so often and spraying the ball left, right and everywhere in between.

I can’t remember a time in my life (2000 baby) where there has been such excitement around a player, the buzz all over social media as he was warming up at half time was something I’ve never seen before.

His cameo was fantastic, there was nothing extravagant about it. The beauty of it all was how simple he made everything look.

Hopefully, it’s not long before we’re back in the ground watching him week in week out.

HENRY: As mentioned, I thought he was fantastic. I have always been a huge admirer and seeing him in a Reds shirt almost felt surreal at first. Liverpool just don’t sign players of this calibre, at the peak of their powers.

It should be stressed that Thiago had it fairly easy because Chelsea were down to 10 men, but everything about his performance oozed class and you could see exactly what he will bring to the team.

He makes passes that the other midfielders simply don’t see, breaking the lines with effortless ease, and he punched the air in delight after winning a late tackle – highlighting his winning mentality and off-the-ball work. He’s a perfect midfielder.

If he can avoid injuries, I think he can be an absolute superstar for Liverpool, taking them to even greater heights. Maybe he will throw in a four-out-of-10 performance against Arsenal next week, get injured and make me look foolish, but this is an elite, world-class player that Klopp has brought in.

JOANNA: It was bloody exciting to see him getting ready at the start of the second half, I couldn’t hide my elation.

A genuine world-class player is now one of our own and it’s been a little while since I was this eager to see a new signing play and he did not disappoint.

As Henry said, his transition was assisted by the fact that Chelsea were down to 10 men as like Klopp noted post-game, defensively we set up differently to Bayern and that is where the majority of his adjustment will need to take place.

But his class just spoke volumes. It felt as though his arrival flicked on a switch in the side and he plays passes that our existing midfield doesn’t without a second of hesitation.

He made it all look effortless and while it was only 45 minutes, it was a sign of things to come.