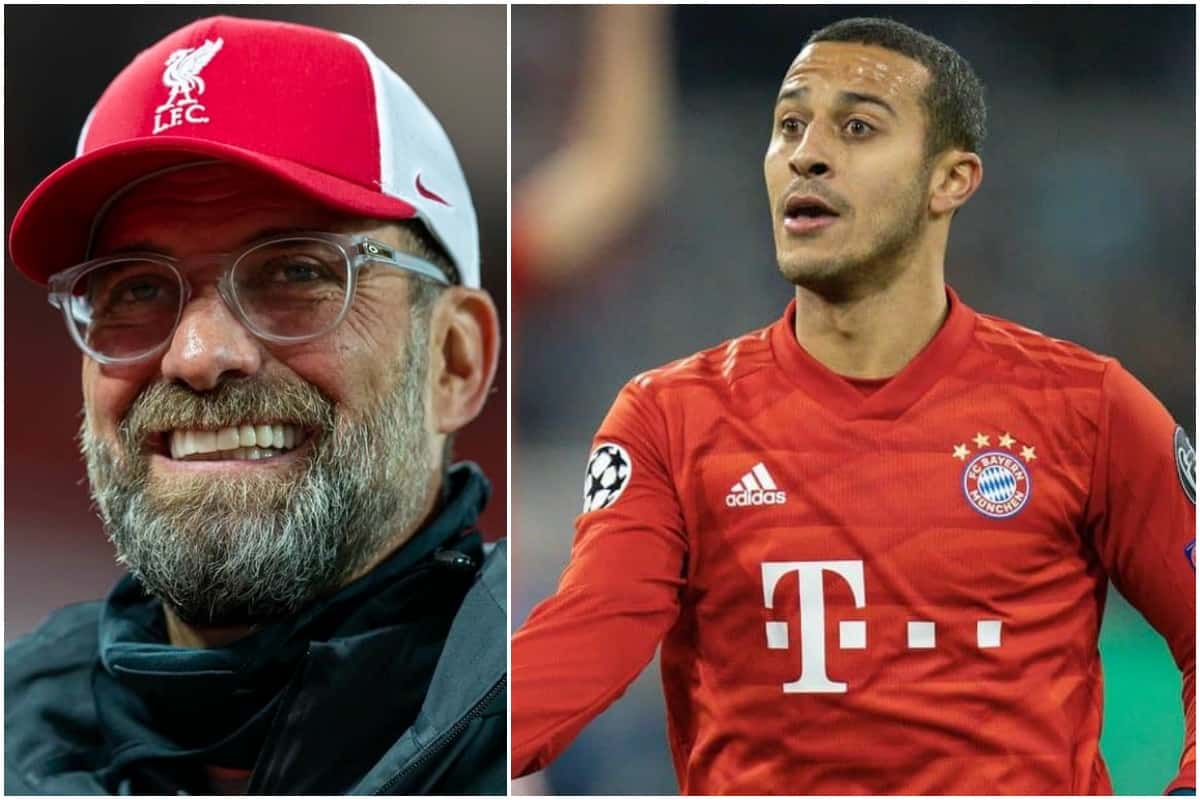 Jurgen Klopp all but confirmed Thiago‘s Liverpool arrival and was quick to insist the Spaniard’s place in the squad will not come at the detriment of existing players at the club.

The Spaniard’s arrival is set to be officially confirmed over the coming hours after the Reds agreed to a four-year deal with their new No. 6.

Tongues are rightly wagging at Thiago’s Anfield arrival, with the world-class operator set to provide tactical versatility to the side and shed some of the burden on the full-backs to create.

And while Thiago penned a heartfelt goodbye message to Bayern Munich, who he spent seven years with, earlier on Friday morning confirmation of his place within Liverpool’s squad has yet to be announced, leaving Klopp to act coy in his pre-Chelsea press conference.

The boss was clearly in a good mood when the first question thrown at him was in relation to Thiago, grinning in delight as he looked to dodge an official declaration that his signature is imminent.

“Nothing really to say,” Klopp said with a wry smile. “How I learned it, it’s not official until it’s announced!

“I’m not an announcer so I don’t know what I can say but it looks quite promising. My hands are tied pretty much but it might be useful to have a look at a few Liverpool channels over the day and we will see whatever happens!

A myriad of reports throughout the summer as Liverpool chased Thiago was in the context that the Reds would need to see players leave before a deal could be done, with Gini Wijnaldum widely touted as the man to depart.

It has since been claimed that positive talks have taken place with the Dutchman who is expected to remain in place this season, and the boss was eager to insist that Thiago‘s arrival will not signal the departure of one of his existing players.

That’s “if it happens”, as Klopp continued to act coy.

“If it happens, it has no impact on anybody’s future in a negative way,” he continued. “Somebody has to leave because somebody has come in, no. No impact.

“What is always true for us is that what we earn with football we spend with football, that’s the club. A pretty short summary of our philosophy but it’s one of the key points and we cannot just say we need this and that and cannot afford it.

“I would not insist on it but we work constantly on improvement, sometimes people like it and sometimes they like it later, that’s fact.

“The window itself leaves the window open, so that’s normal and I cannot promise we will do something and I cannot say it’s 100 percent sure we don’t do anything – it’s the situation.

“It’s a developing situation, everything could happen. A player could come to me and say I want to go, I don’t expect that, but it could happen and we have to react – all these things can happen.”