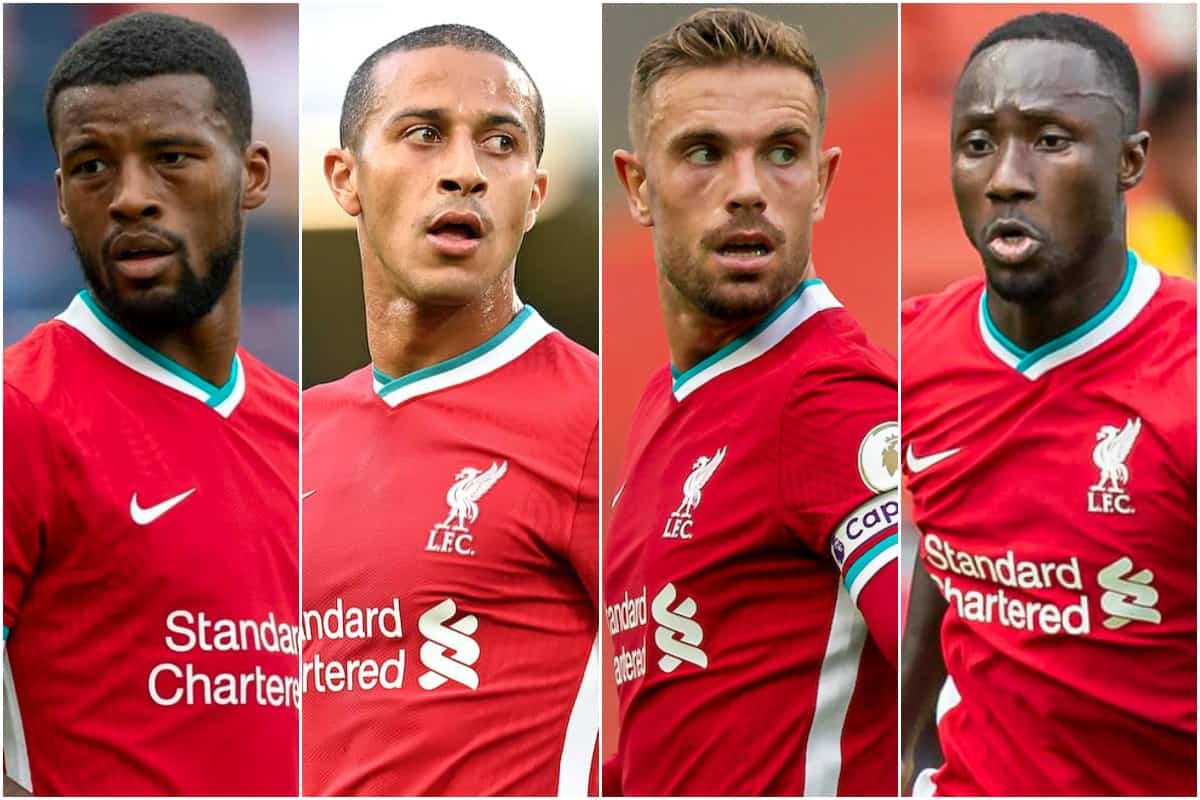 The arrival of Thiago has created tantalising options in midfield for Liverpool, lending itself to a debate where you can’t go wrong.

The selection headache for Jurgen Klopp in recent years has consistently been centred around his midfield contingent, with the attack and defence largely picking itself.

The addition of a world-class Thiago has added an extra layer to the debate, with extra guile added to a well-drilled and hard-working core of players.

For the boss, when all are fit, he has the likes of Jordan Handerson, Fabinho, Gini Wijnaldum, Thiago, Naby Keita, James Milner, Curtis Jones and Alex Oxlade-Chamberlain to choose from – all of whom preset versatile options for how the Reds can line up.

At Chelsea, supporters saw Henderson, Wijnaldum and Keita start the clash before Thiago stepped into the position left vacant by the captain at half-time, with Milner arriving late on the scene as Fabinho dropped into defence for the entirety.

It presents an intriguing battle for the players, one which will only increase the quality amid a rise in competition, and for the fans.

And in our new show ‘This Is Anfield Weekly’, premiering after each matchday, host Keith Costigan, commentator and TV presenter, is joined by TIA’s Matt Ladson and Chris Williams to discuss everything Liverpool – and this time, the midfield combination was front and centre.

The common consensus surrounded the inclusion of new signing Thiago, but Chris, Matt and Keith were split on who should sit alongside the Spaniard.

“Right this second it would be Fabinho in the holding role with Thiago and Naby lad, but I’d have Henderson rotating in there,” Chris said to kick off the discussion.

“Against Arsenal, I’d like to see those three, maybe just for 45 minutes to see what they can do because Thiago and Keita together is something that will strike fear into not only Premier League players but Champions League players as well.”

For Matt, that specific midfield trio “is the most beautiful one that everybody is imagining,” but “right now at this moment in time, I would have Henderson over Naby.”

“What Henderson puts into the whole team is great and Keita has not quite done it yet, he’s shown flashes but he’s not dominated a game and I think if you were an opponent you’d rather Keita be playing against you than Henderson, at the moment.

“I think Henderson brings out the better of those around him, so for me, it would probably be: Fabinho, Thiago and Hendo – which is harsh on Gini!”

It was a case of there being “no wrong answers” such is the versatility and abundance in talent Liverpool have to offer in the midfield department, so much so that Keith can see Fabinho being effectively deployed at centre-back once more.

“I’m going to go for a different one, I’d say: Henderson as the holder, then Thiago and Gini – and I’d have Fabinho at centre-back.

“I wasn’t impressed with Gomez at the end of last season, for me, it’s not just a case of ‘you’re fit, you play’.

“Fabinho’s reading of the game, particularly against teams that sit back against us and try break, his ability to intercept from centre-back, so maybe when you get to some of those bigger European games, he comes back in and plays as the holding midfielder but right now, that’s the way I’d go.

“You definitely have to have Thiago in, you didn’t bring him in to be on the bench in the big games – like Lincoln coming up!” he joked.

The copious options in personnel and system is certainly an enviable position to be in for the club as they look to build on their recent success, as you can make a case for all to be involved at any one time.

And that’s without even considering Milner, Jones and Oxlade-Chamberlain.

The question is, do you agree with Chris, Matt or Keith? Or do you have your own ideal midfield three for the Reds?