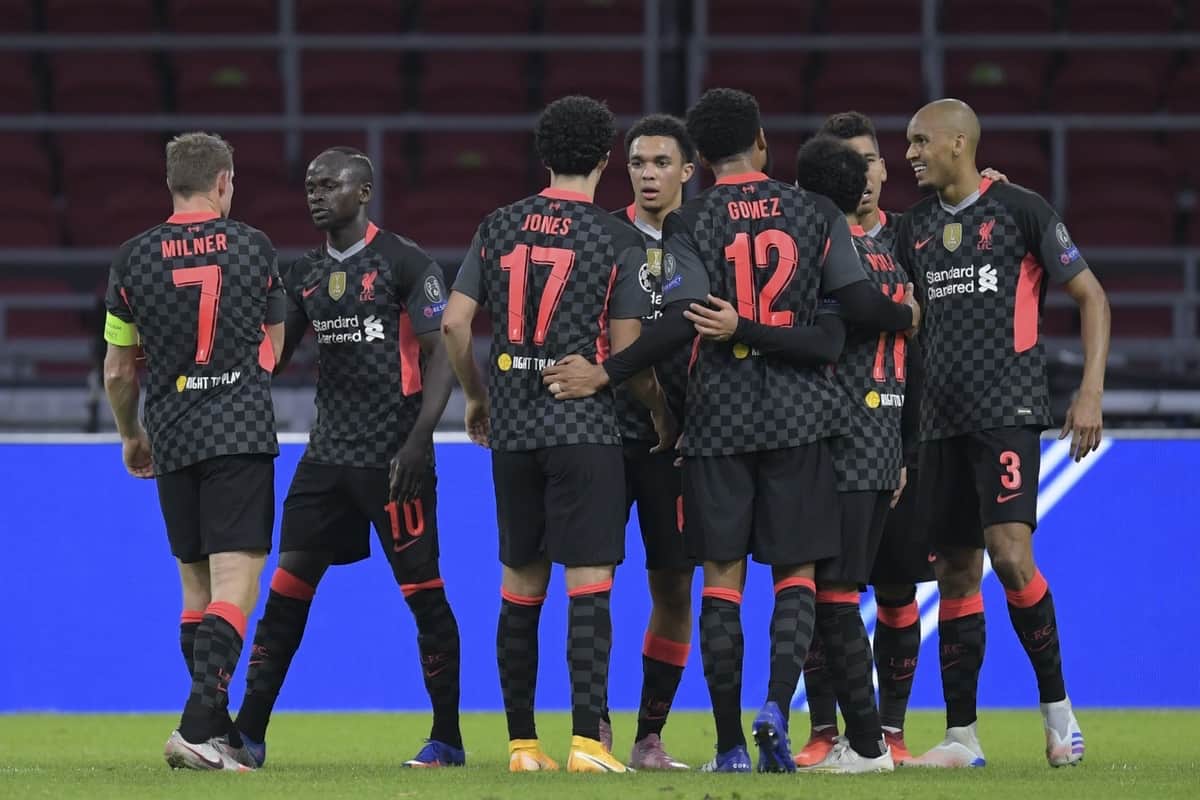 Liverpool overcame their first test in the absence of Virgil van Dijk in his native Netherlands, with a 1-0 victory over Ajax in the Champions League group stage.

In the wake of a devastating injury, the Reds looked to pick themselves back up in Amsterdam, and Jurgen Klopp made a bold choice in handing Curtis Jones his Champions League debut as one of four changes to his starting lineup.

Though the focus in the buildup was on the absence of Virgil van Dijk, the bigger issue arguably comes between the sticks, with Adrian producing two very shaky moments early on and stifling Liverpool’s momentum whenever he took possession.

There were opportunities for both sides, and for the Reds they largely came on the counter, but it took time for the front three of Mo Salah, Sadio Mane and Roberto Firmino to find their fluency.

Adrian did make a telling contribution with 12 minutes left in the first half, standing strong to keep out Quincy Promes from close range with his right boot, denying a certain goal.

Then going up the other end, a moment of brilliance and then clumsiness from Mane led to a strange own goal through Ajax’s Nicolas Tagliafico, with the left-back bundling in a scuffed shot to give Liverpool a 1-0 lead.

More timid play from Adrian saw David Neres lob the Spaniard for an expected equaliser, only for Fabinho to pull out a stunning goalline clearance to keep the Reds ahead at the break.

Liverpool began the second half with a change, as Jordan Henderson replaced Jones, and Ajax began it with a warning, with ex-Everton midfielder Davy Klaasen hammering an effort off the inside of the post in a letoff for the visitors.

Both sides traded chances later on as Firmino fluffed a header, before Klopp made the surprise move of bringing off his entire attacking trio, with Diogo Jota, Xherdan Shaqiri and Takumi Minamino coming on to replace Mane, Salah and Firmino.

Minamino soon tested the palms of Andre Onana and Jota forced a fine block cutting in from the left, with all three of the Reds’ incoming forwards clearly eager to impress with a half-hour in Amsterdam.

Onana almost outdid his opposite number as he found himself charged down by a hard-pressing Jota, but the Ajax goalkeeper was relieved to see the rebound head away from goal and former Liverpool target Perr Schuurs shepherd it into safety.

Ajax went all-out attack in the final seven minutes, with Schuurs and Daley Blind off and Klaas-Jan Huntelaar and Lassina Traore coming on in a bizarre move that only invited overwhelming pressure on the hosts at 1-0 down.

It didn’t pay off for the Eredivisie leaders, with Liverpool able to hold on for victory to start Group D in fine form.