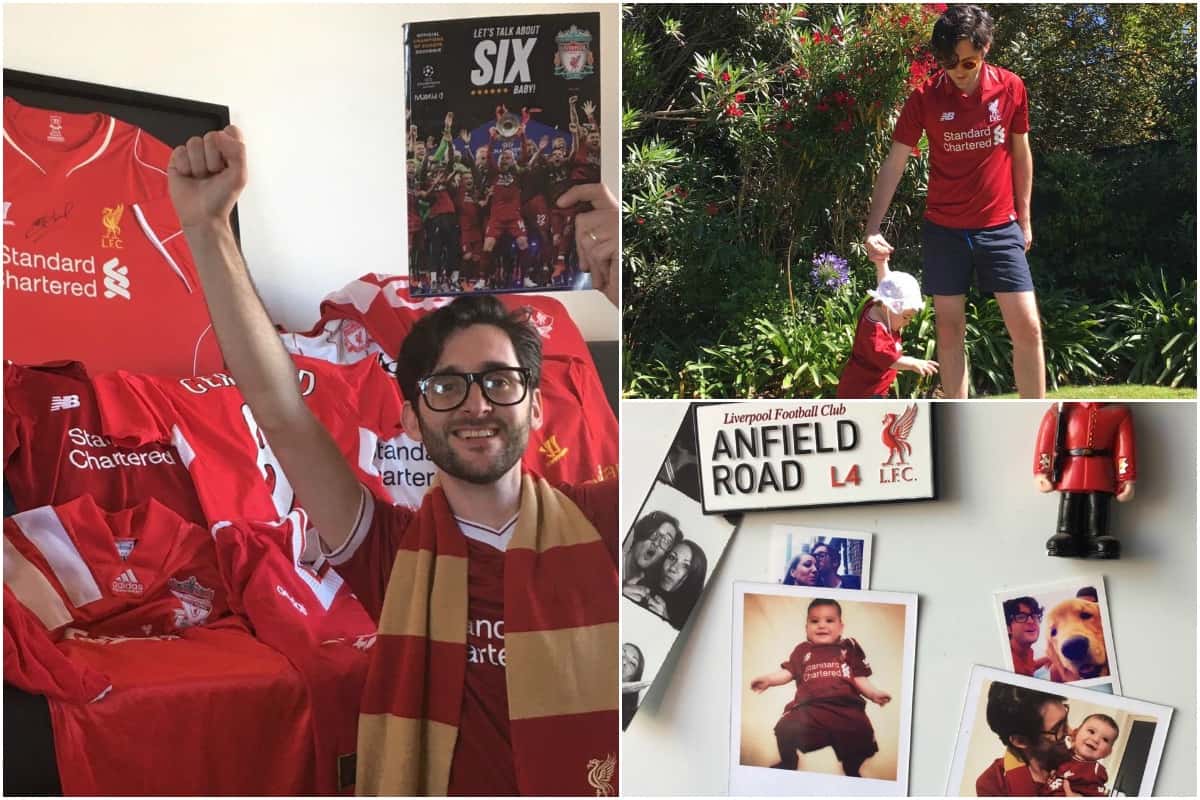 Our series Long Distance Liverpool Love shines a light on devoted fans who grew up as a Red away from Merseyside. Here, Mariano Gilmore from Buenos Aires, Argentina shares his unique story with Liverpool FC.

It was all my grandad’s fault! He was born in Birkenhead, and from a very young age, he became obsessed with the club. After serving in the navy during the war, he emigrated to Argentina; that’s how my dad, and then myself, became Reds. 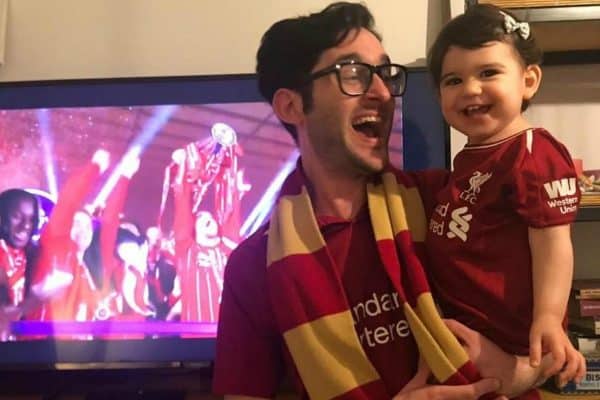 It’s a family tradition. From a very young age, I used to listen to my grandad’s stories about legends like Billy Liddell or Albert Stubbins and imagine them as gods amongst men. Also in the late 70s, my dad went back to the UK for a couple of years and saw the likes of Keegan and a very young Dalglish regularly picking up some silverware.

Growing up with those stories had a huge influence on me and my love for this club and the city. It’s not just a club, it’s my heritage, my DNA. I still have almost all my uncles, aunties and cousins living there so when I want to know where I come from, I just have to look at one of the red shirts in my drawer.

Actually, I have lots of them! But if I had to choose one or two…

Once a year we would go to the UK for Christmas and bring back the LFC official season review on VHS. It was the early 90s and we didn’t have cable at home in Buenos Aires so that was the only way I could catch up and see all the matches, the new players and those crazy Liverpool vs. Newcastle skirmishes that defined the decade.

The other amazing memory and one that shows the love this club can generate is the 2004 match against Olympiakos. My grandad had passed away by the end of the 90s and for a couple of years, I just couldn’t watch the Reds. As I mentioned before, this club is like my family, so it was too painful for me to watch the matches without him.

That’s how I missed the 2001 treble, for example. I just couldn’t see a red shirt without shedding some tears. Then one evening, in December 2004, I was studying for a final at a bar just in front of my uni and they had a huge TV with the Olympiakos match on. First I was reluctant to watch, but after a couple of minutes, I understood what was going on and the importance of that result. And then Stevie did what he did…that was it for me.

The passion and delivery I saw on that pitch was the spark I needed. From that day on I can truly say I haven’t missed a game, most of them together with my family.

We get together with my dad and sing our hearts out. But the routine depends on the kick-off time and the time difference. We can have a match starting at 8am or sometimes at 4pm so this means we can go from a family breakfast to a couple of pints! 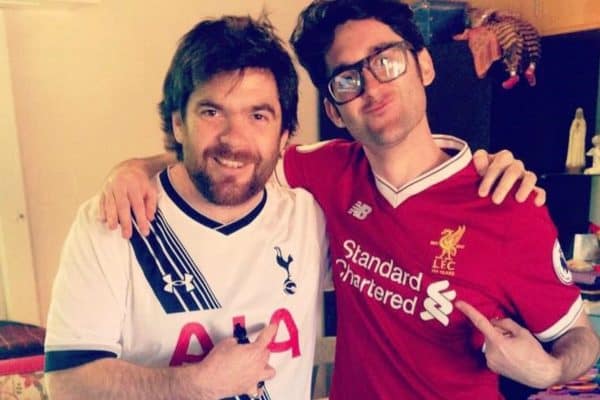 Also, I used to have a couple of mates from the UK living in Buenos Aires. One of them, Hedgie, is a massive Spurs fan. So each time we played them we got together at my flat (if we played at Anfield) or at his house if it was an away game.

We had a bet going on for a few years that the loser had to pay for the BBQ and the wine, so imagine what was it like when we won the European cup against them! A proper red feast.

As a fellow scouser once said: “Home, Family, Love.” Those words sum up everything I feel for the Reds. Once you get a bit older, you start to remember moments from your life and the connection they have with the club. 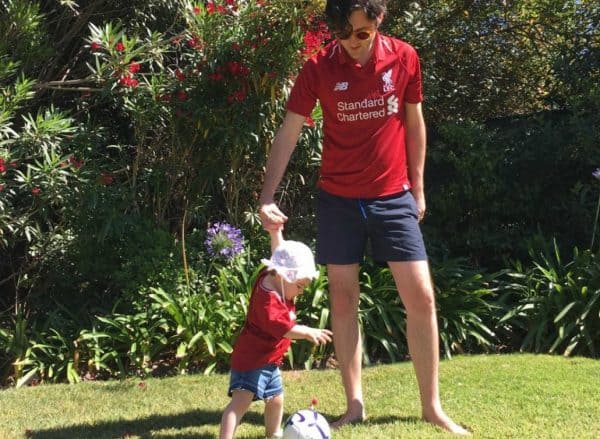 For example, my daughter was born in 2018. The night before the derby. I remember holding her in my arms while Divock scored that crazy header and biting my lip so as not to wake her up.

My Liverpool dream which came true…

When I was 11 I wanted to be the next Jason McAteer. Now I’m 35 so I guess that ship has sailed, right? 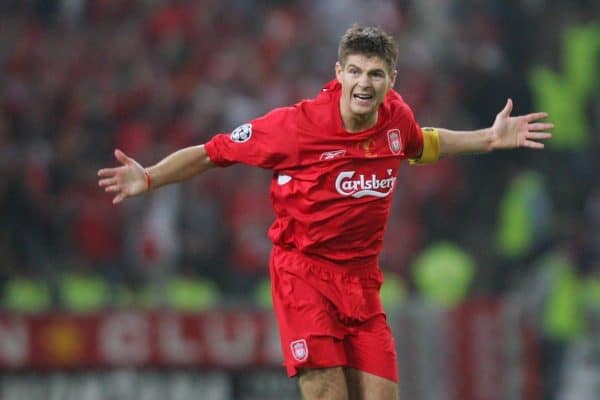 One huge dream I had was to have a Stevie G signed shirt. Once again all my family got together to make it happen. I turned 30 a couple of weeks after his last game so my uncle and my dad bought me a signed shirt as a present.

It took a while for me to actually get it before we finally went to visit for Christmas that year, but when I got my hands on that beauty…’Ohhhhh you beauty!’

I could say Gerrard, but I have a friend who says that you should never meet your real heroes since you’ll only get disappointed. So I’m gonna go with the next one on my list. Macca! Steve McManaman was THE player I worshipped when I was a kid. So the idea of maybe playing a five a side with him in Caballito (my neighbourhood) would be heaven on earth.

One for my grandad: Billy Liddel. I would love to show him what effect he had on my grandad and how now, almost 80 years on, the flame is still burning.

The boss: Jurgen Norbert Klopp. Not only I admire the transformation he has achieved but also I think he is the bridge between our rich history and our bright future. I’m sure he would love to see and explore what is like to live in such an amazing and vibrant city like Buenos Aires. And also…we have amazing breweries so I’m almost certain we could have a jolly real good time.

You know what? What’s one more! Stevie G is poetry in motion, book him the flight and I’ll go and pick him up at the airport.

* Thanks again to Mariano for sharing his story.