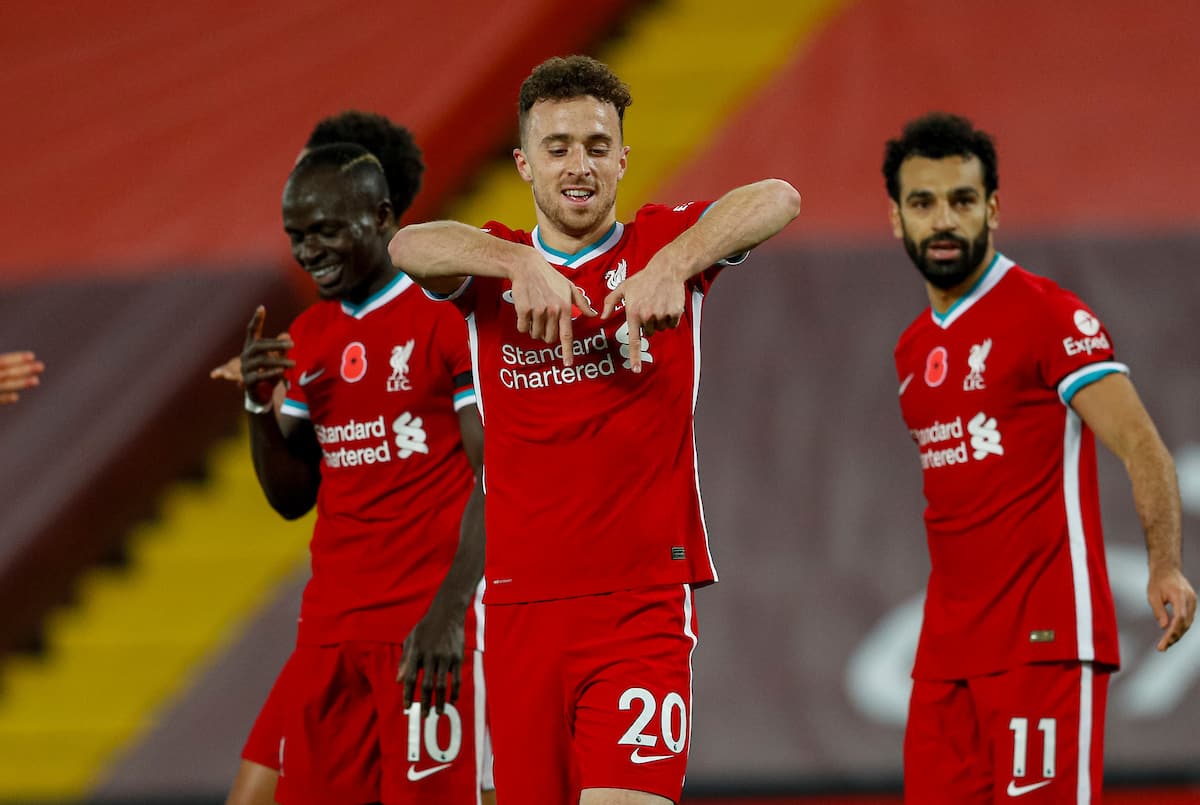 Diogo Jota came off the bench to score yet again as Liverpool came from behind to beat West Ham 2-1 and equal their best-ever unbeaten league run at Anfield.

With all the focus on Liverpool’s centre-backs in the buildup, and Premier League debutant Nat Phillips lining up alongside Joe Gomez at the back, it was disappointing to see the latter culpable as West Ham went 1-0 up within the first 10 minutes.

A litany of errors as West Ham built an attack saw Arthur Masuaku given plenty of time and the freedom of Anfield to float in a cross that was weakly headed out by Gomez and into the feet of Pablo Fornals, who guided home with ease.

The onus was on the Reds to craft openings as West Ham began to sit deep, and Jordan Henderson almost found the bottom corner with a side-footed effort from range.

A moment of skill and smarts from Mohamed Salah got Liverpool back in the game, though, with the Egyptian inviting a foul in the box and, having won the penalty, stepping up to fire low and central for the equaliser.

That proved enough to see the half through with the scores level, with Jurgen Klopp given a decision to make over whether to stick or twist with his midfield in particular.

There were no changes at the break and it showed as the second half continued with the same, slow pace, with chances at a premium for either side and Liverpool finding themselves suffocated in the final third.

It took until the 70th minute for Klopp to turn to his bench, and Curtis Jones and Roberto Firmino were the right choices to come off, with Xherdan Shaqiri and the effervescent Jota replacing them.

Salah moved up front, with Shaqiri an entirely different proposition in the advanced midfield role, and soon after Jota had the ball in the back of the net, only for the goal to be ruled out, perhaps rightly, due to a foul from Sadio Mane.

Thankfully, Jota did eventually grab the winner, and a resurgent Shaqiri was the creator, sliding a perfect ball through for the Portuguese, who converted with ease.

That proved enough, and with the win, Liverpool went top and equalled the club-record 63-game unbeaten league run that Bob Paisley’s Reds set in 1981 – a marker of the quality and winning power of this side.