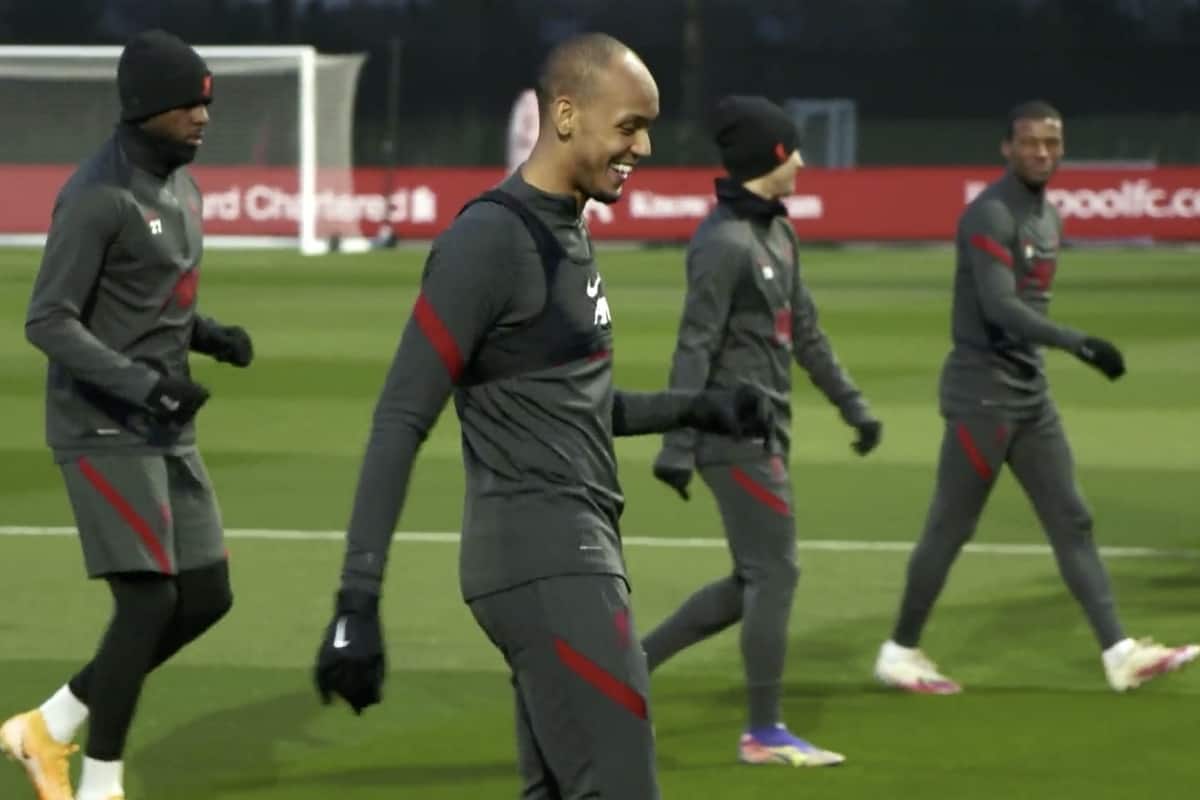 Fabinho has returned to full training at Kirkby and Jurgen Klopp has hinted he could be available to play Leicester, with Liverpool receiving a number of fitness boosts.

The Reds are back in action on Sunday as Premier League leaders Leicester visit Anfield, and over the international break fears mounted over injuries.

With Joe Gomez sidelined with a long-term knee problem and a host of players struggling while on duty, quite how Klopp could line his side up against the Foxes was unclear.

But as the manager oversaw training on Friday, the first team appeared in much better shape than expected, with Fabinho among those involved under the lights at Kirkby.

After just under a month out with a hamstring injury, the Brazilian returns to provide a solution in both midfield and defence, with Klopp confirming that he was “part of the normal team training” prior to Friday too.

“Players have to train in the big training sessions with the team, in team training as we call it, and not only once,” he explained.

“If it’s really serious and we have no other players, then maybe one session has to be enough from time to time. It doesn’t really happen often – I can’t remember when it happened the last time.

“But usually we prepare the players not only for one game, that means they need to be part of it. Fabinho was part of that.

“What we make of that, we will see, because we don’t know yet how he reacts and all that stuff. But Fabinho was part of the normal team training.” 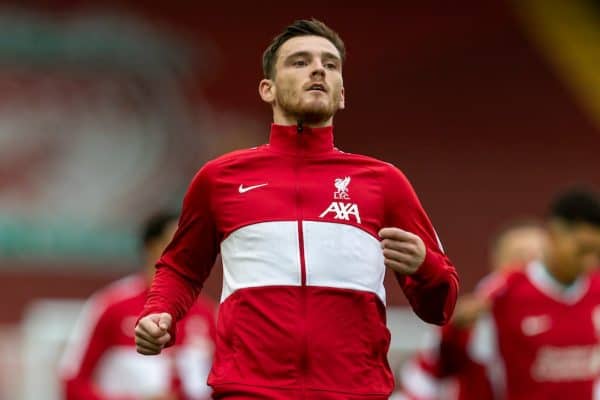 Fabinho was pictured sprinting and stretching as normal, and the No. 3 joined Kostas Tsimikas, Gini Wijnaldum, Xherdan Shaqiri, Roberto Firmino, Divock Origi and Joel Matip in the normal pre-match rondo.

He was not the only player involved who had been considered a doubt, however, with Andy Robertson among those to report back for full training after a hamstring issue arose on Scotland.

Robertson missed a 1-0 loss to Slovakia on November 15 but returned to play the full 90 minutes in a defeat of the same scoreline in Israel three days later, with his taking part considered a risk from a Liverpool perspective.

But the left-back joined Fabinho throughout the full session, as did youngsters Neco Williams (bruised foot), Rhys Williams (stiff hip) and Curtis Jones (back) despite minor concerns.

The availability of Fabinho and the two Williams’ is particularly key, as Klopp is without Gomez, Van Dijk, Jordan Henderson, Trent Alexander-Arnold and likely Thiago for Sunday.

If deemed fit, Fabinho is expected to start at centre-back alongside Matip, while Williams is an option to stand in for Alexander-Arnold at right-back.