Liverpool can seal a place in the Champions League last 16 with a win against Atalanta, but with this the second game of three in six days a host of changes are on the cards.

The Reds currently hold a commanding position at the top of Group D after a 100 percent record in their first three games, where they now meet the side they dispatched to the tune of 5-0 last time in the competition.

Anfield will play host as Atalanta descend for the first time in their history, where they arrive after a turbulent few weeks which has seen them record just one win from their last six games.

Jurgen Klopp is expected to freshen his side up for the Italian side’s visit with the game sandwiched between league games and comes as the second fixture of 12 to take place in just 41 days.

Here’s how the Reds could look to line up under the lights at Anfield on Wednesday.

Liverpool took another hit over the weekend in the form of Naby Keita, who was forced from the field with a hamstring injury to join Trent Alexander-Arnold, Jordan Henderson, Thiago and Xherdan Shaqiri on the sidelines.

It left Klopp with just 16 eligible outfield players to cast his eyes over in training on the eve of the clash, with Roberto Firmino absent but there is reported to be no concern over his availability.

With Trent sidelined and Andy Robertson creeping dangerously into the red zone having played the most minutes of any Red this season, it paves the way for both Neco Williams and Kostas Tsimikas to come into the fold.

There is also scope for Rhys Williams to slot back in at centre-back to manage the minutes of either Fabinho and Joel Matip, with Nat Phillips intelligible for the clash.

In some good news, Mohamed Salah is fit and available after missing Leicester‘s visit with COVID-19.

With the midfield having taken a sizeable hit, James Milner could be looking at his second successive start meaning a rest for Gini Wijnaldum here looks near impossible.

With the Champions League allowing for extended squads and five substitutes, Liverpool could very well be tempted to hand certain players 45-minute spells with options from the start limited due to injury.

The defensive upheaval is expected to continue for this clash and the manager could resort to a makeshift backline to afford players time to rest.

It would see both full-back deputies in Neco Williams and Tsimikas earn their maiden starts for the Reds in the Champions League alongside the centre-back pairing of Rhys Williams and Matip and ahead of Alisson.

This setup would enable Robertson a much-needed rest having already played 1145 minutes of a possible 1350 this season, and that’s no including international exploits.

It could very well stunt Liverpool’s play both offensively and defensively and while too a risk to play Matip from the start, he could be one to switch out at half-time for Fabinho.

In midfield, the trident of Wijnaldum, Milner and Jones could be turned to in the absence of other key options – which would provide experienced heads ahead of a new defensive line.

To lead the attack, Salah will return at the first time of asking alongside Roberto Firmino, fresh off the back of a goalscoring display, and Jota – with Sadio Mane handed a timely break in a side which looks like this: 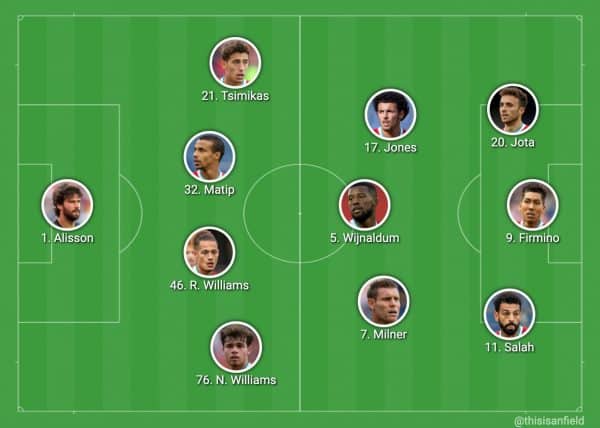 Alternatively, to cater for two rotating full-backs Klopp could very well stick with Fabinho and Matip at the heart of the defence where they could continue to build on their new partnership.

It would certainly be a risk considering the limited options at Liverpool’s disposal in the position but substitutions and a change at Brighton could be in the works instead.

The back-five could then sit behind a double-pivot of Wijnaldum and Milner in a 4-2-3-1 system which would present the chance to inject Jones later in the piece.

Salah, Jota, Firimino and Takumi Minamino would then lead the attack, with the boss having pointed out that the Japan international “trained exceptionally well” on Monday.

Minamino’s opportunities to date from the off have been limited with injuries having not impacted the attack and this match provides the ideal time to enter the fray: 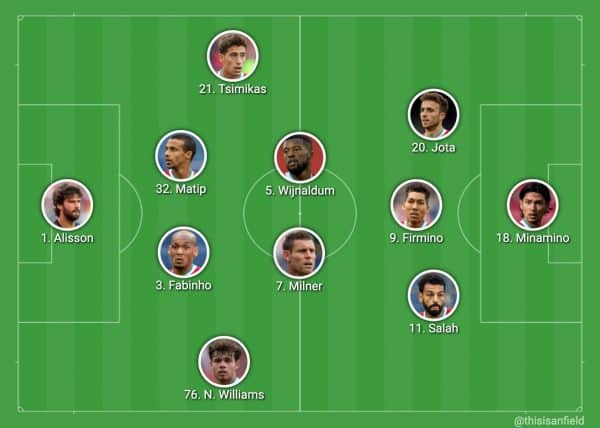 From the previous meeting between the two teams, it is well within Liverpool’s ability to slice Atalanta apart once more and a win here would allow for greater rotation down the track having already sealed a place in the last 16.

But options are limited for Klopp with injuries and increasing fatigue to consider in all departments, but regardless of the XI chosen the Reds should have enough firepower and defensive capabilities to hurt the visitors.