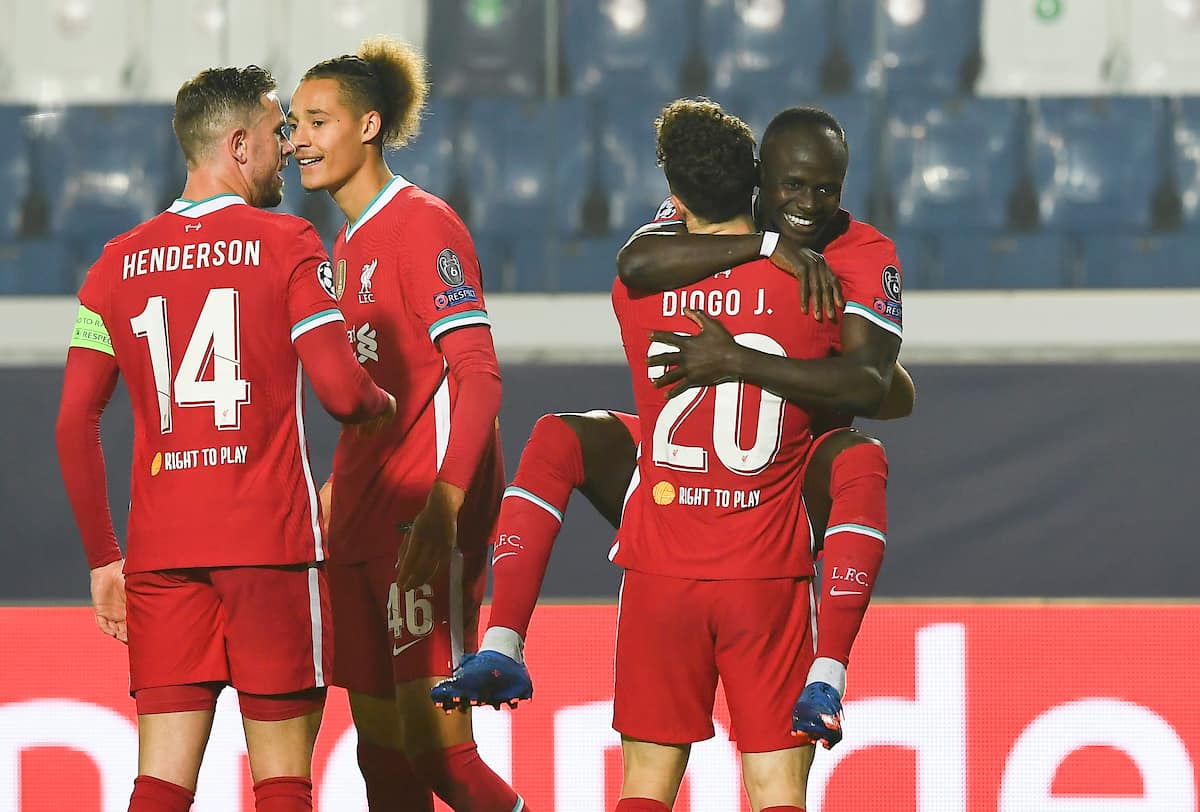 It was a momentous evening for a host of Reds as Jurgen Klopp‘s side stranglehold on Champions League Group D was retained with a thumping 5-0 win at Atalanta.

The clash had been tipped as the Reds’ greatest test in the competition to date, with a free-flowing Atalanta attack to meet a Liverpool side containing a back-four with an average age of 22.5.

But Liverpool swiftly dashed any such notion as they beat the Italian outfit from pillar to post in a fine exhibition of attacking football.

Diogo Jota got the party started having played just a third of the opening half, showing poise and a lethal finish to edge Klopp’s men ahead – and just 17 minutes later he would have his second in stunning fashion.

Not to be outdone, however, both Mohamed Salah and Sadio Mane would find the net in a scintillating four-minute spell after half-time, and as Liverpool continued to turn on the afterburners the latter would set Jota up for his maiden hat-trick for the club.

What was expected to be a high-scoring affair between the two teams simply became a thumping for the visitors, one which cements their place at the top of Group D and makes it five wins in a row.

It was a performance and result which was “needed” for Alisson to keep the momentum rolling during what has been and will continue to be a tough slog of matches.

The Brazilian also took time to laud the impact of both Nat Phillips and Rhys Williams, when speaking to LFCTV, after the pair stepped up to the plate this week at the heart of Liverpool’s defence.

“I think it was needed. Not that we are playing bad but we have tough matches that we play that make our job really difficult.

“Tonight wasn’t different but from the way we play it was better the way they tried to defend us, we have more space on the pitch but because we work hard, we were calm enough to the keep the ball and to prepare the situations.

“We are not a team of only one player, the last week was difficult because we lost some important players but now we have many coming back – Joel was here, Naby as well.

“It’s really good to have the boys back and for Rhys, he’s a really good lad and he’s always listening to me and asking me to speak with him on the pitch so he’s humble and he works hard.

“And Nat, I’m really happy for him and the way he played [vs. West Ham], it was really difficult because he was a long time without playing. He took the opportunity with both hands and did really well.”

For Williams himself, it “doesn’t get much better” to be on the winning side of a 5-0 win, especially on your full Liverpool debut which just so happened to arrive in the most prestigious club competition.

But the 19-year-old’s feet remained firmly on the ground as he praised the efforts of the entire team:

“[Best night] so far, hopefully, there’s many more to come – it doesn’t get much better than a 5-0 away at Atalanta so over the moon.

“Yesterday I found out so I’d been trying to get myself in the zone all day and, thankfully I’ve done that and it’s paid off tonight.

“Every time we went forward we looked like scoring, but me, Joe, Ali and the back four -the entire team really – just pulled together and kept them out.

“But I thought we controlled the game for large parts and every time we went forward we looked like scoring – and credit to Diogo, he put three in so can’t get much better!”

The centre-back was not the only Red with a milestone outing, with Neco Williams‘ introduction in the 82nd minute signalling his debut in the competition, one he was thrilled to celebrate post-match.

And his praise of Jota was echoed by Rhys Williams after a “great team performance”:

What A Night! Full Champions League Debut, 5-0 Away Win And A Clean Sheet. Great Team Performance And Congratulations To @diogoj_18 With The Hattrick???#lfc

“Perfect” was the word for both Trent Alexander-Arnold and Andy Robertson on a European night to savour in Italy:

There was plenty of love for a valuable clean sheet from Jordan Henderson, Joe Gomez and Alisson as the trio commended a “top team performance”:

James Milner was full of “#baddadjokes”, meanwhile, as he heaped praise on hat-trick heroics from Jota on an evening where the Reds were on fire:

And the love-in for Liverpool’s No. 20 continued with Gini Wijnaldum and Curtis Jones, but the man of the moment was quick to turn to the team effort rather than his own:

The result is a significant one at the halfway point of the group stage, one which now sees Liverpool hold a commanding five-point advantage over both Ajax and Atalanta.

And the manner of the performance in addition to a clean sheet serves as the ideal preparation ahead of the Premier League showdown with Man City on Sunday afternoon.