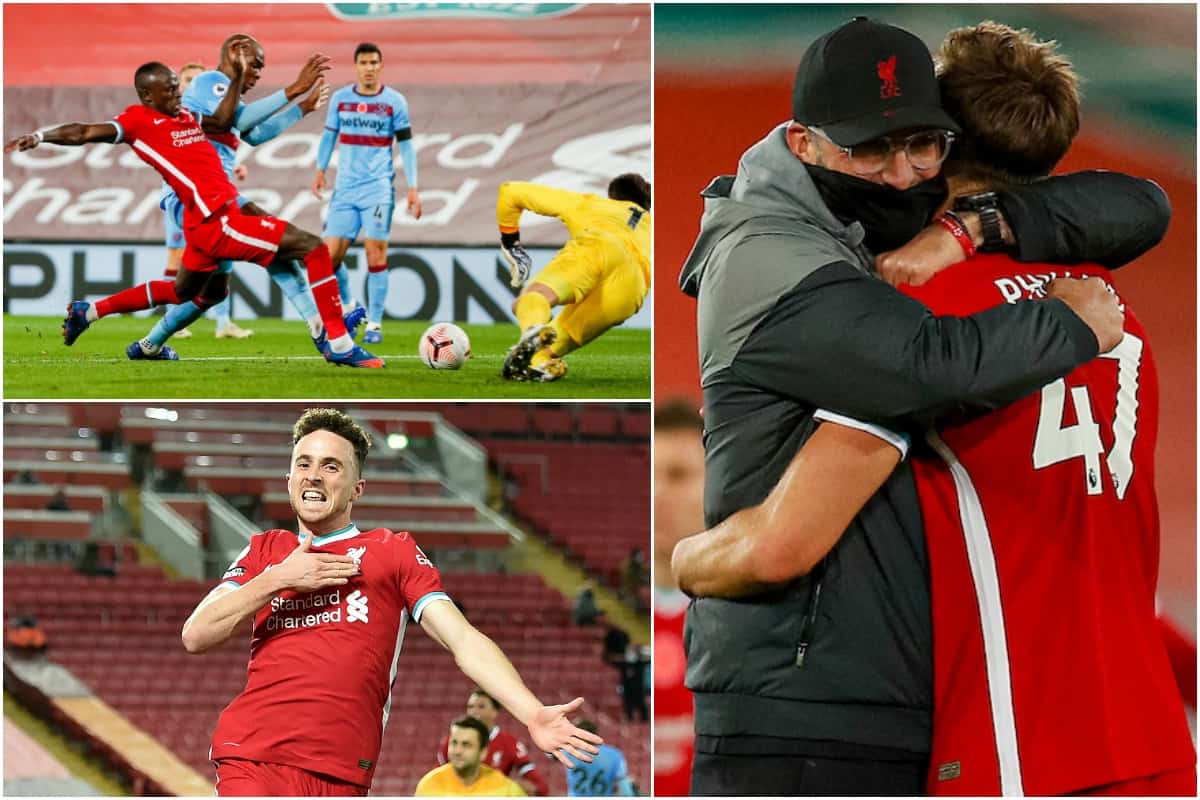 Liverpool summoned their comeback powers once more in the 2-1 win over West Ham to register their fourth successive win in all competitions.

It was not pretty but Jurgen Klopp‘s continue to navigate the roadmap to victory despite yet another early setback in what is a testament to the character and mentality of this Reds side.

Pablo Fornals was the one to edge the Hammers into the lead after some lacklustre pressure in the build-up before Mohamed Salah both earned and converted from the penalty spot before half-time.

And Diogo Jota‘s bright start to life with the club continued with yet another match-winner in what was his fourth goal for the club in just nine appearances.

Amid a host of injuries, the victory will prove to be yet another confidence-boosting one ahead of an all-important week which sees Liverpool meet Atalanta in the Champions League before facing off against Man City.

Here, This Is Anfield’s Joanna Durkan (@JoannaDurkan_) is joined by Chris McLoughlin (@chrismackop), who was at Anfield to discuss the highs and the lows from Liverpool’s victory and the influential form of Jota.

CHRIS: Nat Phillips is a good old-fashioned stopper of a centre-half. He’s the type of player who’d head away the kitchen sink – when it’s full of dishes – if you threw it at him and he was excellent on his Premier League debut against West Ham.

There’s an argument to say that a home game against a side managed by David Moyes isn’t a bad one to come in for given he’s now failed to win in 17 visits, with four different clubs, to Anfield, but that commanding stoppage-time header clear by Phillips from a West Ham corner was exactly what we want to see from a central defender during the absence of Virgil van Dijk.

Xherdan Shaqiri also deserves a huge amount of credit for his outstanding assist for Jota’s winner. Imagine if Thiago had played that pass. They’d be putting a statue up on Twitter, so it was good to see Shaq making the kind of contribution that proves his worth by setting up what proved to be the decisive moment.

JOANNA: We certainly like to do it the hard way, don’t we?

As Chris noted, Phillips was mightily impressive on his league debut and provided the aerial presence we need in the absence of Van Dijk.

I, like many others no doubt, were tentative about how he would fare but he settled in quickly and as he mentioned post-match was eager to do the simple things first and it paid dividends.

On top of that, Gini Wijnaldum was up there as a man of the match contender in my books having provided a calming presence in midfield, with his ability to navigate through tight spaces opening up the field on more than one occasion – and it proved vital in the build-up to the winning goal.

Our squad players are seizing the opportunity and in a season where the demands are greater and injuries are playing their part, it’s a massive confidence boost for all involved knowing any team the boss selects is capable of getting the job done. 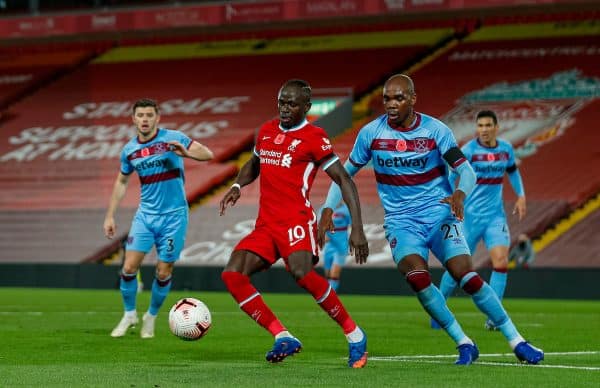 CHRIS: Goalkeepers have always been over-protected by referees and now they have VAR as a back-up.

Jota’s winner was his second goal of the night after he had a perfectly good goal ruled out for a foul by Sadio Mane on Lukasz Fabianski. Except it wasn’t a foul.

Mane slid in to try to score, Fabianski dived out to try to stop him and the pair collided. Referee Kevin Friend thought there was absolutely nothing wrong with it and awarded a goal when Jota slotted the ball home until his mate in a cupboard near Heathrow Airport had a word in his ear.

Off he ran to the telly in the tunnel and instead of having the conviction to stick with what he’d seen with his own eyes, he opted to avoid the seemingly cardinal sin of disagreeing with VAR and ruled the goal out.

Were you really surprised? Given all the VAR calls that have gone against the Reds already this season, it’s incredible that they’re top of the league.

JOANNA: I am in the same boat as Chris with the entire VAR process and despite not even seeing the replay of the footage you just knew the goal wasn’t going to be given.

Thankfully, it did not derail our ability to pick up the win but I still can’t help but think that the Premier League could do with an independent set of referees in the VAR room.

There wasn’t much to like in the way of West Ham‘s goal in terms of nobody closed down the cross and when we know our defence isn’t at its strongest it has never been more important to do so.

Both Trent and Jones were at fault in my view and Henderson’s ball-watching let Fornals find acres of space – Gomez’s header was simply the finishing touch to a poor defensive passage.

Again, it wasn’t a performance to write home about and it didn’t need to be but I do feel Roberto Firmino needs a little spell on the sidelines – I’m one of his biggest fans but he’s a little too hot and cold this season and he hasn’t consistently brought his high intensity he to the table.

And a word on Jota, he’s proved to be a steal so far – how do you assess his start to life at Anfield?

CHRIS: Not since Luis Garcia, who drinks sangria, has a Liverpool player scored at Anfield in his first three top-flight appearances for the Redmen. So for Jota to have now done so is the kind of start to a Liverpool career that would have had Kopites frantically thinking of a song for him if games weren’t behind closed doors.

I was lucky enough to have been at Anfield last night for my role as Senior Writer for Reach Sport and whether this comes across as well on the TV I’m not sure, but Jota has a natural instinct to move into spaces off the ball where the ball subsequently comes to him.

It’s not a coincidence. He got between defenders for his header against Sheffield United, he was exactly where he needed to be – in the centre of the goal – for his opener against Midtjylland and the run he made for Shaqiri to nutmeg Fabian Balbuena and send him through for the winner against the Hammers was perfectly timed.

Space is limited at Anfield by defensive teams, yet Jota is still finding gaps to get into. He looks like another shrewd Klopp/Michael Edwards signing and the kind of fourth option up front that Liverpool were crying out for.

JOANNA: His signing came as somewhat of a surprise as one day he was a target and the next he was officially a Red – and he’s not looked back in the six weeks since.

At 23, he fits the mould perfectly in terms of a long-term profile but in the short-term, he is proving to be an absolute steal.

The drop-off in quality from the regular front three has been too vast in recent years, where last season the next highest scorer in Divock Origi netted only six goals in all competitions – Jota already has four in nine games.

With pace, game awareness and the desire to run his socks off, Jota is the attacking player we have been desperate for and although it is still early days his transition has been more than you could ask for.