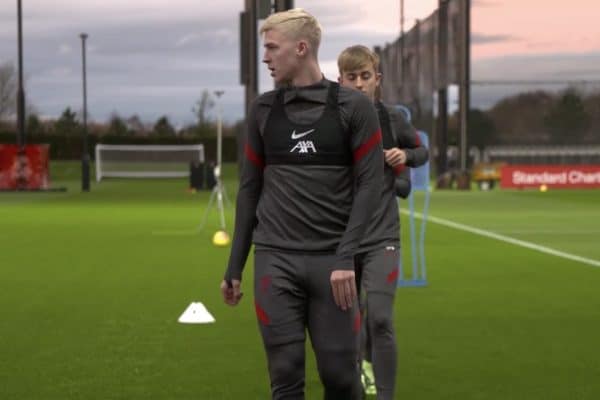 With the rest of the first team due to join later in the week, Klopp and his staff worked with 13 players at the £50 million site on Tuesday afternoon.

Some of those were more familiar than others, with Joel Matip, James Milner and Nat Phillips all present and preparing for expected starts against Leicester on Sunday, while Adrian and Divock Origi also trained.

But there were others with less experience of working under Klopp, with eight academy talents drafted into senior training.

Most, if not all, have trained with the first team at Melwood in the past, and three have even been included in the matchday squad already this season, but there was a clear hint at the future within the selection.

Three of those included were goalkeepers, with Vitezslav Jaros continuing his run with the seniors having travelled and trained on a regular basis of late, while summer signing Marcelo Pitaluga and under-18s No. 1 Jakub Ojrzynski were also involved.

Pitaluga caught the eye with his speed and reflexes in a training drill led by goalkeeping coaches John Achterberg and Jack Robinson, with there being hopes of a long-term breakthrough for the Brazilian.

Billy Koumetio remains part of the group, and having celebrated his 18th birthday at the weekend could be closer to a competitive debut for the club, particularly with Fabinho, Joe Gomez and Virgil van Dijk all out.

Another who could profit from injuries to senior players is Jake Cain, who has been on the substitutes’ bench for all three games in the Champions League so far, and has seemingly impressed Klopp with his quality and application.

The 19-year-old was joined by his close friend and long-time midfield partner Leighton Clarkson in the session at Kirkby, with Clarkson – a versatile midfielder finding his feet as a No. 6 – working closely with Milner.

In attack, both Paul Glatzel and Luis Longstaff were part of the group, with the latter’s involvement particularly interesting.

Longstaff, a 2015 signing from Newcastle, arrived at the club as a skilful winger, but has been converted to a more natural No. 9 role in recent seasons.

Having signed a new contract with the Reds in June, Longstaff has explained how he looks to Roberto Firmino as “a player that I take a lot of inspiration from.”

“He is not really an out-and-out, in-the-box, big, strong No. 9 and neither am I, so he is a good role model to look up to and see how he plays,” he told the club’s official website in the summer.

“I have tried to model my game similar to how he plays.

“I’m not big and 6’5″ who is going to score lots of headed goals, so you’ve got to try to find different ways to do it, and I think Firmino is a good example of how he does that.”

While he and the other youngsters drafted into training on Tuesday will find it difficult to break into Klopp’s first team due to the competition for places, the new setup at Kirkby has certainly boosted their chances.

Jaros, Pitaluga, Ojrzynski, Koumetio, Cain, Clarkson, Longstaff and Glatzel are likely to be joined by other academy players in the coming months, as the manager makes the most of the proximity between the first team and youth sites.