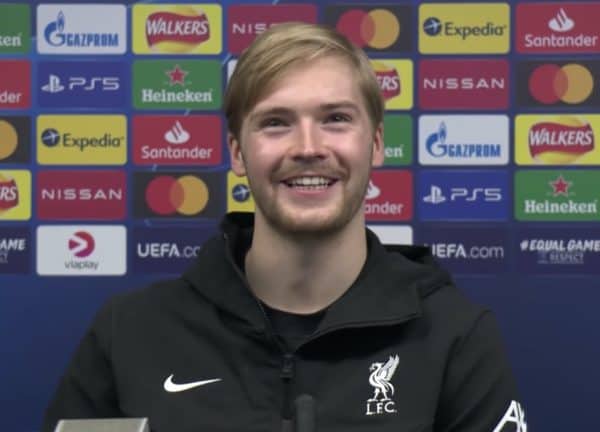 Caoimhin Kelleher on Klopp hugs, a strange night at Villa and his “decent week”

Caoimhin Kelleher has reflected on a “decent week,” saying he is “more comfortable” after keeping clean sheets on his Premier League and Champions League debuts.

To describe the past week for Liverpool’s No. 62 as “decent” would be an understatement.

But Kelleher has a cool head on his shoulders and is clearly not getting carried away after shutouts against both Ajax and Wolves, sealing vital wins for the Reds.

He will be required to maintain that as he is expected to make his third start of the season in the trip to Midtjylland on Wednesday, with his involvement in pre-match media duties suggesting he will feature ahead of Adrian.

“It’s been a decent week for me, what can I say?” the Irishman told reporters on Tuesday.

On the prospect of having usurped Adrian and convinced Klopp and his staff that signing a new backup goalkeeper was no longer required, Kelleher took a diplomatic stance.

“That’s not something I talk about, to be honest,” he said.

“When I get my opportunities I’ve been trying to take them. I’ve had two games and thought I’ve done well in the games, but that’s all I can do. I’ve not really talked about that.”

Kelleher was short and to the point throughout his press conference, but opened up slightly more when asked about his experience last season, when he conceded five goals against both Arsenal and Aston Villa in the League Cup.

His focus was seemingly on the strange defeat to Villa just under a year ago, which saw Liverpool field their youngest-ever starting lineup as Neil Critchley took managerial duties, with Jurgen Klopp at the Club World Cup.

“I wouldn’t say disappointed. I know I could have done better, but it was a difficult game,” Kelleher recalled.

“We had a lot of younger players against tough opposition, which made it more difficult as well.

“I wasn’t too hard on myself, after the games I just looked back to see what I could do better and just kind of moved on from there. I didn’t spend too much time thinking about it.”

The 22-year-old is right not to dwell too much on those previous disappointments, and similarly, he should be praised for not going overboard after his positive start to life as Alisson‘s deputy.