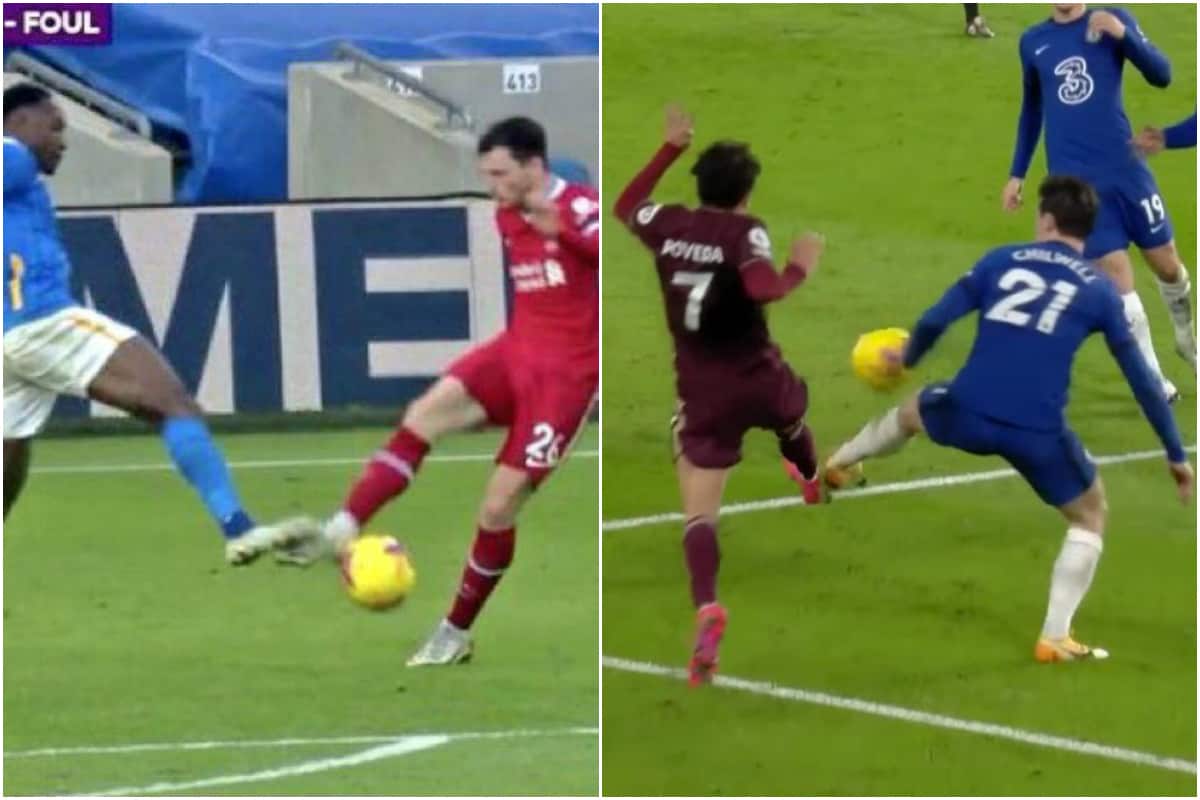 A week after Andy Robertson was penalised due to the influence of slo-mo replays at Brighton, an identical challenge from Chelsea‘s Ben Chilwell was overlooked.

Not only that, but it was overlooked by the very same referee.

VAR is becoming increasingly unpopular in the Premier League due to the perceived incompetence of the officials in place to use it, with errors arising every weekend.

Beyond the farcical offside calls and laughable handball decisions, there are clear pitfalls in how and when the technology is used and which incidents are focused on and which aren’t.

Jordan Pickford’s season-ending challenge on Virgil van Dijk in October’s Merseyside derby is the shining example of this, with VAR David Coote subsequently given the following weekend off after missing it entirely as he fussed over pixelled lines for a marginal offside.

But there have been countless over situations already in this season’s Premier League, with two very similar challenges seven days apart once again highlighting the flaws in the use of VAR.

In injury time at the Amex last weekend, an attempted clearance from Robertson caught the boot of Brighton‘s Danny Welbeck as he stole to nick the ball in the box.

VAR rules Robertson committed a foul on Welbeck and Brighton make no mistake from their second spot-kick of the day! ? pic.twitter.com/4dfHAf0Fwe

There was contact, certainly, but the way in which Welbeck fell to the floor only painted it as a foul when viewed back via slo-mo replays – in realtime, as the referee would have seen it, it was not a foul.

Brighton were awarded a penalty and Pascal Gross duly converted, ensuring a share of the points on a frustrating afternoon for Liverpool.

Fast-forward to this weekend, and Chelsea‘s clash with Leeds at Stamford Bridge, and an almost-identical tackle from Robertson’s fellow left-back Chilwell on Ian Poveda went unpunished.

Kevin Friend who gave the penalty against Robertson last week for the same thing has just said this wasn't a penalty for Leeds. Again VAR isn't the problem it's the people operating it.pic.twitter.com/pmHaKvQhUm

Unlike Welbeck, Poveda pushed on and attempted a shot at goal which was easily collected by Edouard Mendy, and that is the crux of the situation.

In reflection, and with the benefit of replays, Sky Sports commentator Alan Smith questioned whether the tackle would have been given as a penalty had Poveda gone to ground, which The Athletic’s Leeds correspondent Phil Hay, among others, agreed:

That replay of Chilwell's challenge on Poveda – if Poveda goes down, that's a penalty (going by previous decisions by VAR, although they don't necessarily mean anything). #lufc

VAR everybody. Tell me one difference between that tackle from Chilwell on Poveda and Robertson’s on Welbeck. One given as a pen by VAR and the other not. Nonsense.

The thing to take from Robertson/Fuchs/Chilwell across the last eight days is that the problem isn't video assistant referees but referees.

Can also draw the same conclusion from European and domestic officiating and process.

Crucially, as Hay attested, it would be a foul “going by previous decisions by VAR,” with this likely a reference to Robertson’s challenge on Welbeck only a week previous.

The issue, strangely, is not with the tackle and the punishment for Liverpool, but the inconsistency with which games are being refereed, with and without the use of VAR.

This is no better underlined by the fact that the referee at Stamford Bridge, Kevin Friend, was in the VAR booth for Liverpool’s draw with Brighton, and was the official who recommended referee Stuart Attwell go to his monitor to review the situation in slo-mo.

VAR will never be perfect, but the flaws in how it is being employed in the Premier League are no better highlighted in these two identical situations which concluded with very different results.

Far from it should Liverpool bemoan Chilwell ‘getting away’ with his contact on Poveda, of course, as there is a strong argument to claim that neither his nor Robertson’s attempt at winning the ball was a foul.

But every football fan should be concerned about the way VAR is used in the English top flight, as at present there are far too many questionable calls, weekend after weekend.