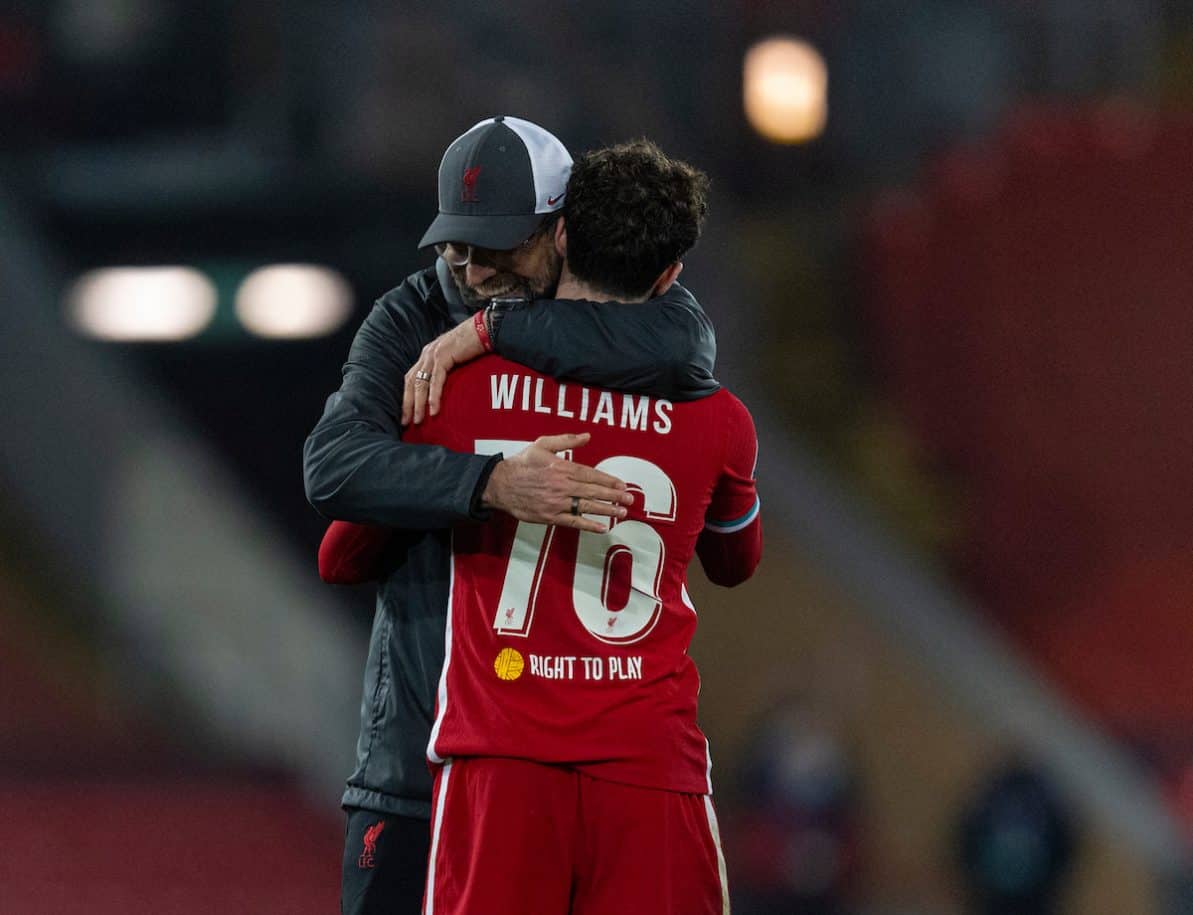 Jurgen Klopp has revealed he had a “long talk” with Neco Williams that saw them both agree “he has so much more in his locker,” resulting in a winning display against Ajax.

With Trent Alexander-Arnold and James Milner both sidelined, Williams made his first Premier League start of the season in Saturday’s visit to Brighton.

After conceding a penalty which Neal Maupay thankfully missed, the right-back was then brought off at half-time, with further criticism coming his way on social media.

It was a big night for the 19-year-old as Liverpool looked to book their place in the Champions League last 16, therefore, and Williams responded with a match-winning assist as Curtis Jones downed Ajax for a 1-0 victory.

Speaking after the game, Klopp detailed how a “long talk” with Williams helped provoke an improvement, as well as highlighting the difficulty in coming in to replace Alexander-Arnold.

“We had a long talk this week. We both thought he has so much more in his locker than he has shown so far,” the manager told BT Sport.

“But that’s exactly the situation, when is the right moment for a young boy to come in?

“The season started after a really difficult summer with lockdown, nobody knew when we can go on again, then kind of a short pre-season, then all of a sudden Trent is out with COVID and then he has to play early.

“He was not in the best shape in that moment, all players have these moments. And you are on the big stage, that’s not easy.

“Tonight showed at least glimpses, he can be so much better but tonight he showed that it’s all good.”

Jones has been more assured in his displays throughout the campaign, but the midfielder has certainly improved as the months have gone on, potentially jumping ahead of the likes of Naby Keita and Alex Oxlade-Chamberlain.

Klopp attempted to stay reserved in his praise for the No. 17, but lauded Jones for taking his chance “exceptionally well” when others are absent.

“If I was sure he wouldn’t watch my interview I would say something else!” he joked.

“That’s how it is sometimes, when you have problems there is always an opportunity for somebody else. And he took it, just exceptionally well, so I’m really, really happy for him.”

Tuesday night was a step forward, not only for Liverpool, Jones and Williams, but also for Caoimhin Kelleher, with a near-faultless team display against Ajax providing a major boost of confidence.

When called upon now, the hope will be that the Reds’ youngsters will be even more prepared to showcase their talents and help the side through a rough period.