Liverpool were left to rue a host of missed opportunities in a 1-1 draw with West Brom as Sadio Mane‘s opener did not prove enough at Anfield.

After having the luxury of an eight-day break over the Christmas period, Jurgen Klopp made just two changes to the side who dismantled Crystal Palace last time out for what was the final game at Anfield in 2020.

Curtis Jones and Mohamed Salah returned to the starting lineup, while a welcome boost came in the form James Milner and Xherdan Shaqiri returning to the bench after injury.

Sam Allardyce did not shy away from the fact that he would set out his side to “frustrate” and while certainly deploying a low block, the Reds did carve out enough space and in-turn opportunities.

Andy Robertson looked the avenue to goal throughout and in the early stages his drilled balls into the box which begged to be converted, only for the opener to be created by an unlikely source.

With the Baggies hugging their penalty box, Joel Matip took advantage and played the ball into space toward the onrushing Sadio Mane who took it on his chest, turned and clinically slotted home to make it 1-0 with just 12 minutes on the clock.

The Reds suffocated West Brom on and off the ball, the on aspect was a rarity, however, with the visitors having shared in just 18 percent of first-half possession, and ought to have had a more comfortable buffer at the break.

Both Mane and Mohamed Salah found openings but Liverpool’s eye-catching interplay in the middle of the park could not be matched where it mattered most as the final ball eluded Klopp’s men to leave West Brom with a glimmer of hope. 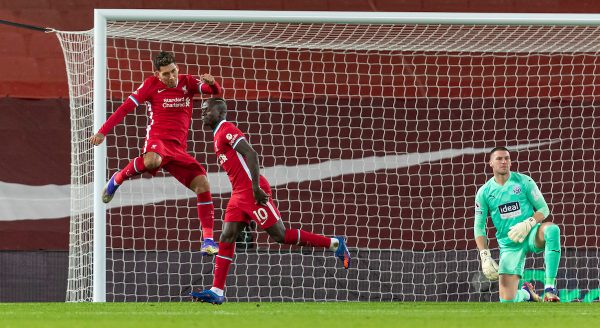 It was a case of picking up from where Liverpool left off when the second-half got underway in regards to searching for a second and being unable to pick the lock, but the Baggies changed their tact.

Alisson had to twice make a save in the first seven minutes as the visitors committed more men forward as errors snuck into the Reds’ play and frustration simmered, as Allardyce had hoped.

What looked to be a groin injury for Joel Matip forced his withdrawal in yet another blow just before the hour-mark, with Rhys Williams introduced for his second Premier League appearance.

Roberto Firmino proved a bright spark but found his runs often unrewarded, while his fellow Brazilian Alisson was on hand to brilliantly deny Karlan Grant in their best opening of the game.

It provided a boost to their confidence, however, and after Curtis Jones gave away a sloppy corner, they struck as Semi Ajayi’s header found the inside of the post and nestled into the net – it certainly had a feeling of inevitability about it.

Alex Oxlade-Chamberlain was injected into proceedings to add the zest desperately needed and a desperate hand by Sam Johnstone on a Firmino header denied him an assist at the death.

It meant Liverpool failed to capitalise on results elsewhere on Boxing Day to remain just three points clear at the top of the table.