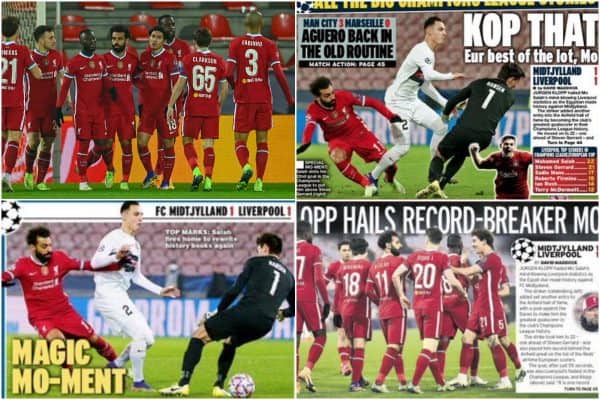 VAR once again found itself in the spotlight during and after Liverpool’s 1-1 draw with Midtjylland, while one Reds youngster also stood out.

Jurgen Klopp‘s side made the trip to Denmark to play their sixth and final Group D game on Wednesday, with the manager making eight changes to his personnel.

There were surprise starts for the likes of Fabinho, Diogo Jota and Mohamed Salah, with the latter opening the scoring after just 55 seconds, becoming Liverpool’s leading goalscorer in the Champions League.

Midtjylland equalised in the second half when Alexander Scholz beat Caoimhin Kelleher from the penalty spot, after the goalkeeper had conceded the spot-kick.

Takumi Minamino had a late goal ruled out after a dubious handball decision against Sadio Mane, as both sides headed home with a share of the spoils.

Here’s all the best analysis from the media after Liverpool’s draw, with a number of talking points for journalists to sink their teeth into.

It was no surprise to see VAR mentioned by many, with the controversial technology taking the sting out of the game several times…

The Independent‘s Melissa Reddy bemoaned VAR yet again coming to the fore, as has been the case far too often this season:

“If there wasn’t already enough head-scratching moments in the dead rubber, what would have been a Liverpool winner for Takumi Minamino was also chalked off after a check.

“And so it ended all even, with frustration at the use of VAR still managing to muddle a match that had nothing riding on it.”

Dominic King of the Daily Mail echoed that sentiment, with frustration the order of the day:

“Aren’t dead-rubbers supposed to be non-events? The result of Liverpool’s trip to Denmark may have had little consequence but you would never have guessed from a match that felt like it would never end.

“The fact nine minutes were added on at the end gives you an indication of how stop-start things became with video checks. Some things never change.”

There was special praise for Salah, on another record-breaking night for Liverpool’s magnificent No.11…

Paul Gorst of the Liverpool Echo lauded the world-class Egyptian, as he wrote his name into the history books once more:

“This low-key finish was Salah’s 22nd in Europe for the Reds in just 39 games, eclipsing Steven Gerrard’s record in 34 fewer.

“The Egyptian is a modern day superstar whose accolades will be comparable to any of the club’s legends when he finally opts for pastures new.”

The Mirror‘s David Maddock highlighted what a special achievement it is, particularly the quickfire nature of it:

“The striker added yet another record to his growing list of entries into the Anfield hall of fame, with a goal against Midtjylland that makes him the club’s greatest goalscorer in their Champions League history.

“The strike took him to 23 – one ahead of Steven Gerrard – and also places him second behind the Anfield great on the list of the Reds’ all time European goalscorers.

“It is a remarkable number in just three and a half seasons.”

Impressive youngster Leighton Clarkson also caught the eye, filling in admirably in the centre of midfield…

King liked the look of the Champions League debutant, on a night when he made an impressive 10 recoveries – more than anyone else:

“There was much to admire about the way the young players, most notably Leighton Clarkson, went about their business.”

Writing in his Player Ratings, the Echo‘s Theo Squires lauded Clarkson as the latest youngster to slot in seamlessly:

“Wasn’t overawed by making his Champions League debut, using the occasion to showcase his superb range of passing and always available for his team-mates.

“Had got back to clear off the line from Dreyer only for a penalty to be given for the challenge by Kelleher. They’ve found another one.”

Reddy was another who liked what she saw from the diminutive 19-year-old:

“Teenage midfielder Leighton Clarkson was handed his Champions League bow and turned in a fine showing in the centre of the park.”

However, not everyone understood Klopp’s selections on the night, especially the use of Salah…

The Times‘ James Gheerbrant saw little logic in playing the Egyptian King for the entire game:

“With Liverpool having already secured top spot in group D, Klopp had the luxury of rotating his squad: Divock Origi deputised for Roberto Firmino, and Leighton Clarkson, the 19-year-old academy graduate, started in midfield.

“But for a dead game in a congested season the insistence on fielding some senior players was bemusing, not least Mohamed Salah, who played the full 90 minutes.”

The Daily Mail‘s Danny Gallagher was of similar thought process:

“Klopp has been very vocal this season regarding football’s hectic playing schedule and the increased risk to players with the matches building up.

“Yet, despite his side having safely progressed to the knockout stages, Klopp opted to start his key man Salah and keep him on the field in Denmark for the full 98 minute duration of the game.”

The Reds now head to London at the weekend to face Fulham, with Jurgen Klopp no doubt rather happier this weekend that the Reds play on Sunday rather than the 12:30 game on Saturday!