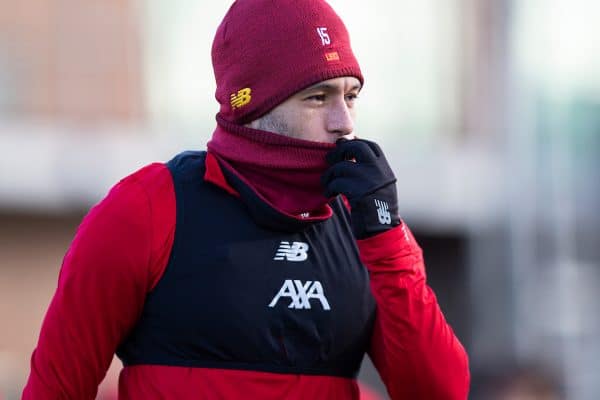 Alex Oxlade-Chamberlain took part in training at Kirkby on Tuesday, but neither Joel Matip nor Curtis Jones were pictured as Liverpool prepare to take on Midtjylland.

The Reds are due to fly to Denmark following their afternoon session, with Jurgen Klopp expected to ring the changes for a Champions League tie that has no bearing on Group D.

Liverpool have already qualified for the last 16 as group winners, meaning they can approach this clash with composure, and with Fulham to come on Sunday, it could be that a number of players are given rare opportunities.

It appears as though the club’s medical staff are taking precaution with two players as Matip and Jones were absent from the squad warming up in the rain.

Matip has started five of the last six games, completing the full 90 minutes in four of those, but given his injury history he is likely to be rested for this fixture, as with the Premier League draw at Brighton last month.

Meanwhile, Jones looked to have suffered a hip injury during the 4-0 thrashing of Wolves last time out, and it is possible that he is being omitted as a precaution.

The pair could, of course, have simply joined up with their team-mates after the LFCTV cameras filmed their footage, with it often the case that certain players require individual work during sessions.

Oxlade-Chamberlain’s presence should be treated with a measure of caution, but it was a positive sight to see the midfielder taking part in warmup and ball work after missing the entire campaign so far due to a knee injury.

Last week, Klopp revealed that the No. 15 would be assessed over the “next few days,” before he and his staff decide when to “throw him in.”

It could even be that Oxlade-Chamberlain is part of an extended matchday squad against Midtjylland, on a night that could see youngsters Billy Koumetio, Jake Cain and Leighton Clarkson make their Champions League debuts.

There were no further surprises when it came to academy players being involved in training, though, with Luis Longstaff, Yasser Larouci and Liam Millar not present despite being registered.

Summer signing Marcelo Pitaluga was part of the goalkeeper’s group but will not be in the squad at the MCH Arena, as like Nat Phillips he is ineligible for the competition until the last 16.