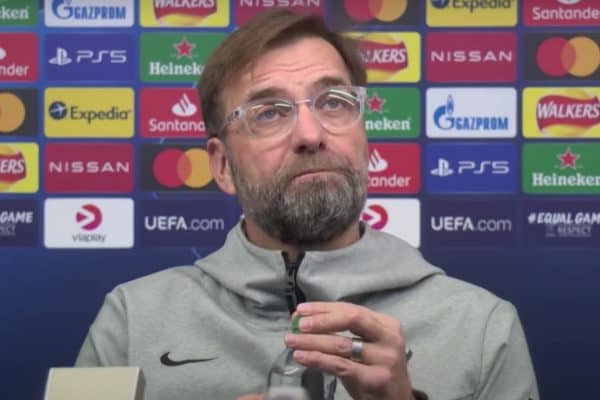 Jurgen Klopp was insistent that Liverpool “want to win” in what is a dead-rubber affair against a “difficult” Midtjylland side when he fronted the press on Tuesday.

The sixth and final Champions League group game is upon the Reds on Wednesday night, where for the first time under Klopp qualification to the knockouts stages is not reliant on the result.

Liverpool, of course, safely secured their passage into the last 16 with their 1-0 win over Ajax at the start of the month, providing an opportunity to shuffle the pack in Denmark.

There are to be no returning faces from injury nor fresh concerns from the weekend for this fixture, but Klopp did hint at rotation as this game comes less than 72 hours after the last and 92 hours before the next.

“Today is the one session we have together, so I still have a few hours to make decisions,” Klopp said. “I will use the time, our analysis is not finalised yet, and it will all play a part in my thinking. So we will see.

“All these kinds of things will lead in the end to a lineup.”

And the manager is not expecting an easy ride, irrespective of the team he assembles, as despite Midtjylland languishing at the bottom of Group D with a solitary point, they have proven to be tough oppostion.

“It will be difficult because Midtjylland is much better than the table shows, when you analyse you see how good they are and how they grew in the competition without getting points,” he added.

“But it’s a strong group and so it was difficult for Midtjylland, but I’m sure they will give us a proper fight and we have to be ready for that.”

The boss also praised the club’s youngsters for seizing the moment and explained Divock Origi‘s lack of minutes this season.