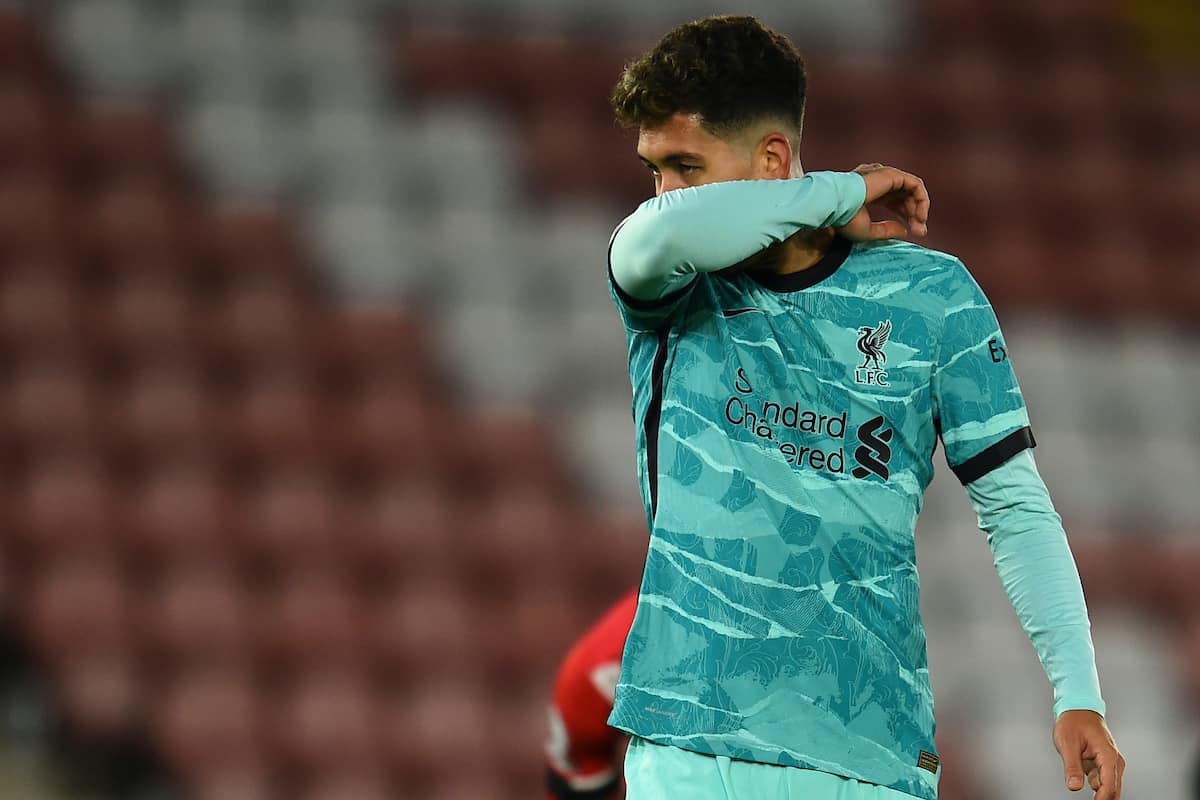 Liverpool suffered a second league defeat of the season with a 1-0 reversal at Southampton, with a number of players looking ill-at-ease and well below their best.

Thiago returned to the starting lineup for the first time since the Merseyside derby back in October, and quickly showed two truths.

He’s unbelievably good on the ball, better than most at avoiding challenges and opening the opposition, but he’s also not fully fit – as you’d expect.

He was slow in a couple of early tackles, was booked almost from kickoff and made a few other fouls during the match as he was a yard off the pace of the ball changing direction.

From the base of midfield, though, he did dominate play after the break, helped the quick exchanges of passes return in the final third and kept the Reds on the front foot.

The only positive on a bleak night to kick off 2021 for the Reds.

Whether it’s a lack of fitness because of a non-existent pre-season – Trent was out, remember, for what passed for our summer buildup – or a lack of confidence, Liverpool’s right-back is well, well below his best level right now.

Again, his crossing was frequently overhit, aimless or straight into the nearest defender, while in open play he looks so unusually unsure of himself that he’s often turning back toward his own goal or hitting passes into his marker.

Trent at his best, there’s no finer right-back in the league; Trent on current form, he often hasn’t been the best right-back on the pitch this season.

It was no surprise when he was subbed off – his shot just beforehand was likely hitting the corner flag rather than the frame of the goal.

Sky’s stat on him giving away possession more times than any other player this season only rubs salt into the wounds.

Another new back line

Two training sessions with Jordan Henderson at centre-back, then straight into a competitive match.

Henderson was the newest member of the central defensive makeshift cast, and within a couple of minutes of kickoff that unfamiliarity was perhaps on show: it was he who dropped deepest from the free-kick.

Once or twice thereafter the same happened, with Henderson out of line with at least a couple of other defenders – not a slight on the captain, so much as an indication of the lack of natural positional play the Reds have available.

The knock-on effect of Hendo being at the back was Hendo not being in the middle, where our first-half play was directionless, lacking aggression, unable to impose itself.

Jamie Carragher says we won’t win the title this season if we don’t sign a centre-back this month and not many fans would disagree with that.

Where to start this time?

Liverpool probably should have had a penalty, with Sadio Mane going down in the box under Kyle Walker-Peters’ challenge, but it wasn’t given or spoken about for long.

Of more irritation, perhaps, was a big chance which fell to Bobby Firmino after the Saints ‘keeper had spilled the ball – but the ref blew his whistle for a foul.

Firmino put it wide, but after the whistle had gone – there’s no way of knowing if he’d have taken extra care if it was still ‘in play’…which it should have been.

The flags don’t go up for offside 30, 40 yards from goal, the whistle doesn’t go for obvious offsides until the ball goes dead – so why is it happening inside the penalty box when the phase will clearly be over a few seconds later?

It happened again second half, our attack being stopped for very, very little at all.

The consistency has to be there for all types of potential stoppages, not just pointless moments where it’s an easy out to fall back on VAR showing how correct the officials can be.

Oh, and their centre-back made a save their goalkeeper would have been pleased with.

Manchester City, not United, remain Liverpool’s biggest title rivals – but it’s United who pose the next challenge in the league.

At this stage the FA Cup match with Villa has to be almost ignored, or used as planning for getting back to a better frame of mind, fitness levels or altered tactical plan – or maybe a mix of each for different players.

But the United match is now must-win. Three games without a win has seen the Reds’ lead wiped out and we’ll likely be off top spot before we kick off at Anfield on January 17.

Having no defence is one thing, but having all the attack available and scoring just once in three matches clearly points to an issue or two to sort out on the Kirkby training pitches.

It’s three hours without a goal now, with the attack looking exceptionally toothless since the seven goals at Crystal Palace.

Takumi Minamino had his best performance at Selhurst Park but hasn’t played a minute since, while Mohamed Salah has looked well, well out of form… since that interview that week also.

Diogo Jota being back soon would be very welcome.