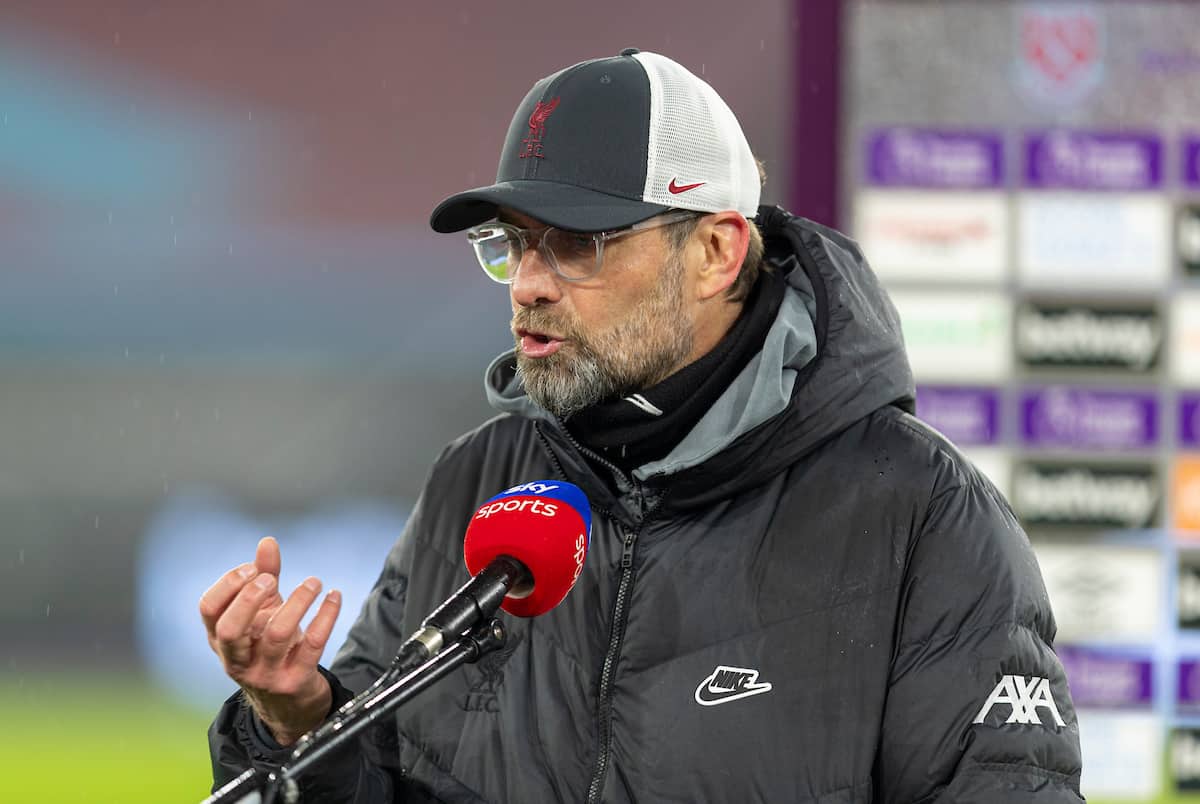 Jurgen Klopp praised the “super game” of Mohamed Salah as his brace helped lead Liverpool to a 3-1 win at West Ham on Sunday.

The Reds returned to London merely three days after their last visit, aiming to secure back-to-back league wins for the first time since December.

Further injury concerns caused a sense of trepidation prior to kick-off and while the first-half was a non-event, Liverpool burst into life in the second.

Salah was the man to break the game open with a sumptuous curled finish after some “cheeky” work from Curtis Jones, before adding another thanks to a sublime touch and team effort.

The finishing touches were added by Gini Wijnaldum with the slight blemish being Craig Dawson’s late consolation, but three points were all that mattered for the Reds.

And post-match the Egyptian was the star of the show, with the boss praising his “world-class” ability after ending the night with 21 goals to his name already this season.

“It was a good sign [at Tottenham] for him that a couple of things were clicking again and tonight he played a super game,” Klopp told reporters.

“Was really in the game, flexible, kept the ball, passing was good. The first goal was a super-smart goal because from my perspective I think Fabianski couldn’t see the ball and he chipped it into the far corner.

“And the second goal, what a counter-attack! Two passes until Mo got the ball, the last ball was spectacular from Shaq and first touch [from] Mo was outstanding, world-class and a nice finish. Top game and top goals.

“He will never stop having a massive desire for scoring goals, he’s a world-class player.”

With the centre-back department depleted, with Preston’s Ben Davies expected to fill a gap, and Sadio Mane the latest victim of a “minor” muscle issue, it was a victory to be admired.

For Klopp, the injury situation is never far from his mind as he looks to keep as many players as fit and available at one time – which they looked to have escaped without harm on Sunday. 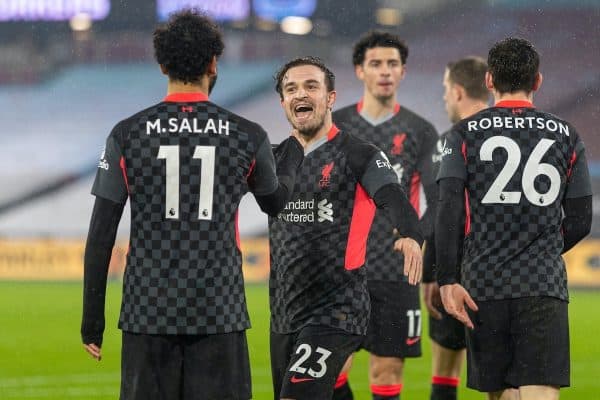 Scans on Joel Matip‘s ankle, however, require a further look as Liverpool face a stint without the No. 32.

“My mood is constantly concerned about injuries,” he added. “We try to save everyone and it was like that was Milly but as far as I know today nothing happened injury-wise.

“With Joel we don’t have the final diagnosis. The specialist must have a look.”

Focus will now switch to Brighton‘s visit on Wednesday, where a win would add to the stakes when Man City arrive next week.