Jurgen Klopp could recall Alisson, Fabinho and Sadio Mane for Sunday’s clash with Man City, while he faces a big call over whether to start one of Ozan Kabak or Ben Davies.

The Reds head into their meeting with City wounded by a 1-0 loss to Brighton last time out, hampering the momentum built with back-to-back wins over Tottenham and West Ham.

Taking on the title favourites after such a setback may not be ideal, but it gives Liverpool the opportunity to not only strike back but to claw their way back into the race to become champions.

Klopp is therefore buoyed by the return to availability of a trio of key players, along with the arrival of two new options at centre-back.

While he remains without a number of his staple starters, the manager now has genuine options – so how could the Reds line up against City?

Five in, two out?

Liverpool’s training session on Friday saw Klopp welcome back Alisson, Fabinho and Mane, but it seemed as though precaution is being taken with both Gini Wijnaldum and James Milner.

Neither were part of the group put through their paces at Kirkby, but that is not to say they won’t be available for Sunday, with it likely the club’s fitness staff are managing their fitness.

Only Andy Robertson and Mohamed Salah have played more minutes than Wijnaldum this season, and Wednesday night’s 64th-minute withdrawal was only the third time he has been subbed off in the league – and the earliest of those.

It is likely the Dutchman is close to the red zone, and a lighter load in training could allow him to still start on Sunday.

Similar could be said of Milner, who has started each of the last four games, and a 35-year-old playing 237 minutes over the last seven days is an obvious indicator of the need for rest.

Fortunately, the overload on Klopp’s midfield options is soothed by the availability of Kabak and Davies, which would allow at least one of Fabinho or Jordan Henderson to push forward into the middle of the park.

Diogo Jota remains absent, however, as does Naby Keita, with the pair working together in tailored sessions as they move towards a return.

For a game of this magnitude, Klopp could name arguably his strongest possible side in the absence of Jota, Virgil van Dijk, Joe Gomez and Joel Matip.

While he faces a big call over whether to trust Kabak after only a handful of training sessions, the 20-year-old’s experience in the Bundesliga – and the fact he is a natural centre-back – makes him a worthwhile consideration.

This is particularly the case if he is able to partner Fabinho who, as de facto fourth choice at the start of the season, could remain at the back despite the arrival of Davies and the improvement of Nat Phillips.

A Kabak-Fabinho pairing should allow Liverpool to stay on the front foot against City, and so too will the return of Alisson from illness and a shift for Henderson into midfield.

If Wijnaldum is deemed fit to start, Klopp could deploy a trio of Henderson, Wijnaldum and Thiago for the first time from the start of a game.

And with Mane able to rejoin Salah and Roberto Firmino in attack, a formidable XI presents itself: 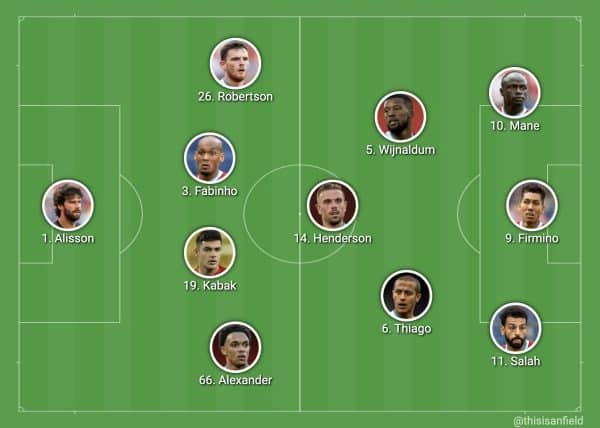 There remains a possibility that this clash comes too soon for either of Liverpool’s deadline-day signings, though, which would see a makeshift centre-back pairing start again.

If neither Kabak or Davies start, it is likely that Henderson partners Fabinho at centre-back, with a number of options able to take the captain’s spot in midfield.

The most attractive is Curtis Jones, given the 20-year-old’s impact off the bench against West Ham and his dominant display in the big-game clash with Spurs back in December.

That would likely be Klopp’s only change from the previous suggested XI – provided Wijnaldum is fit – and would see Liverpool line up as below: 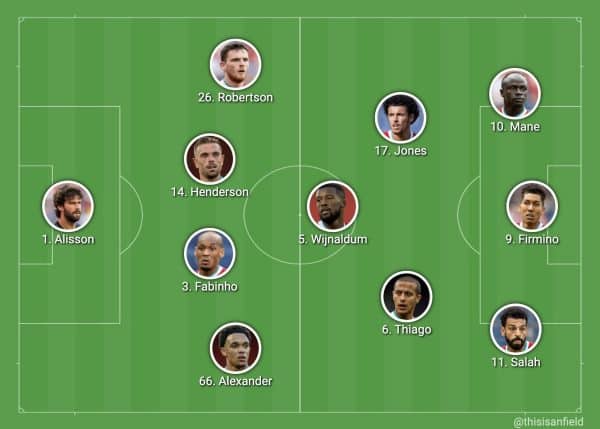 With the addition of Kabak, the Reds could line up with a very strong chance of sealing the win over City, particularly given Pep Guardiola is without the likes of Kevin De Bruyne and Sergio Aguero.

It could be another game-changing result, as though City would still hold a game in hand, Liverpool would have reduced the gap between them to just four points.