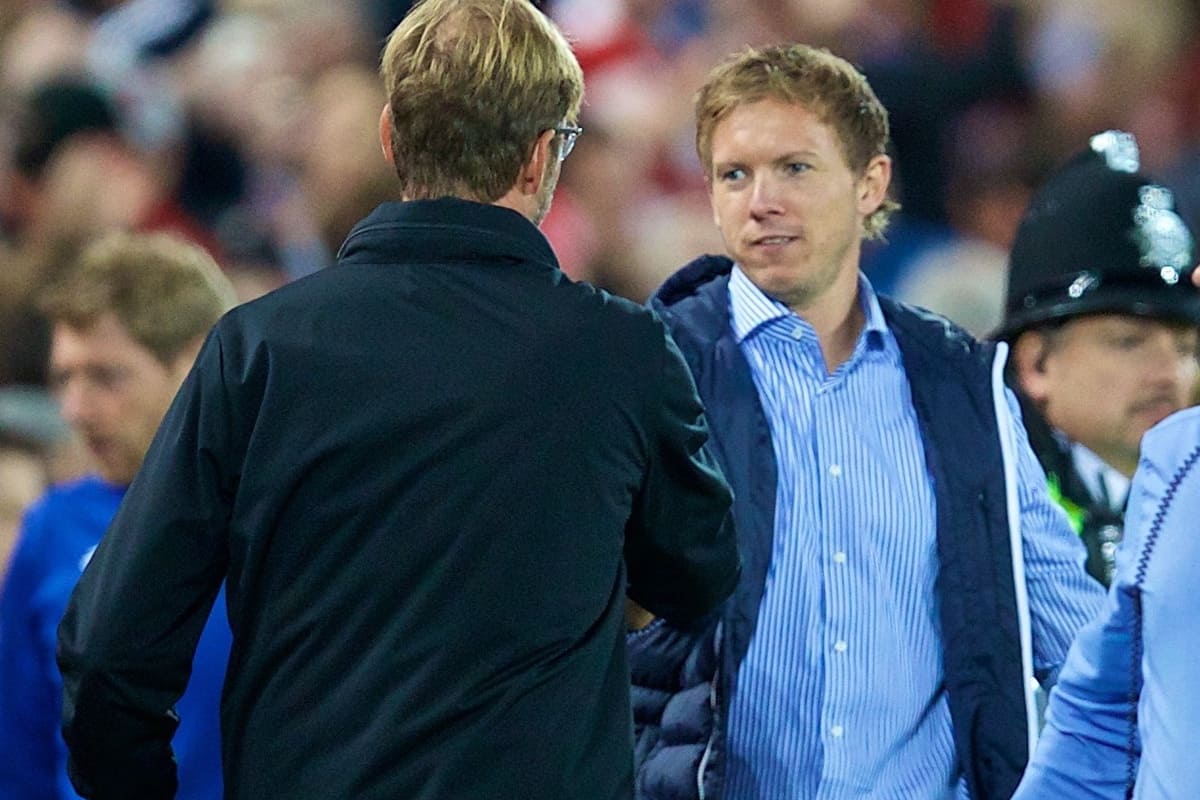 RB Leipzig omitted their two best centre-backs, their captain and their recent first-choice striker, as they prepared to take on Liverpool with a 2-1 victory over Augsburg.

Leipzig will play ‘host’ to the Reds on Tuesday night, with the first leg of their Champions League last-16 tie to be held at Budapest’s Puskas Arena due to travel restrictions in Germany.

Jurgen Klopp has insisted that the venue will not make a “massive difference” in a game that pits two of the most exciting sides in Europe against each other for the first time ever, with Liverpool simply preparing for a win.

Seventeen hours before the Reds kicked off at Leicester, Leipzig welcomed Augsburg to the Red Bull Arena, with Julian Nagelsmann making four changes from the 3-0 win at Schalke last time out.

Prior to the game, Bayern Munich sporting director Hasan Salihamidzic told BILD that Upamecano had opted to join the Bundesliga champions, spurning interest from Liverpool among other clubs.

Another Leipzig centre-back believed to be on the Reds’ radar, Ibrahima Konate, was also on the substitutes’ bench on Friday night.

Without their two best defenders, their captain Sabitzer and their go-to striker of late Sorloth, Leipzig went 2-0 up before half-time, with Dani Olmo scoring from the spot and Christopher Nkunku adding another.

Daniel Caligiuri clawed one back for the visitors, but Leipzig were deserved winners having dominated possession and fired 16 shots on goal to Augsburg’s four.

Konate, Adams, Sabitzer and Sorloth all came off the bench in the second half, while Upamecano went unused, with the quintet possibly set to start against Liverpool.

Nagelsmann retained his 3-1-4-2 shape, which could be the case in Budapest in midweek, but interestingly the wide threat of Nordi Mukiele and in particular ex-Man City left-back Angelino was largely ignored.

Leipzig have focused many of their attacks through the middle this season, which could pose an intriguing battle against a Liverpool side primed for creating from the flanks.

Victory over Augsburg pushed Leipzig to within four points of Bundesliga leaders Bayern, having played a game more, and serves as a confidence-booster ahead of the meeting with Klopp’s Reds.