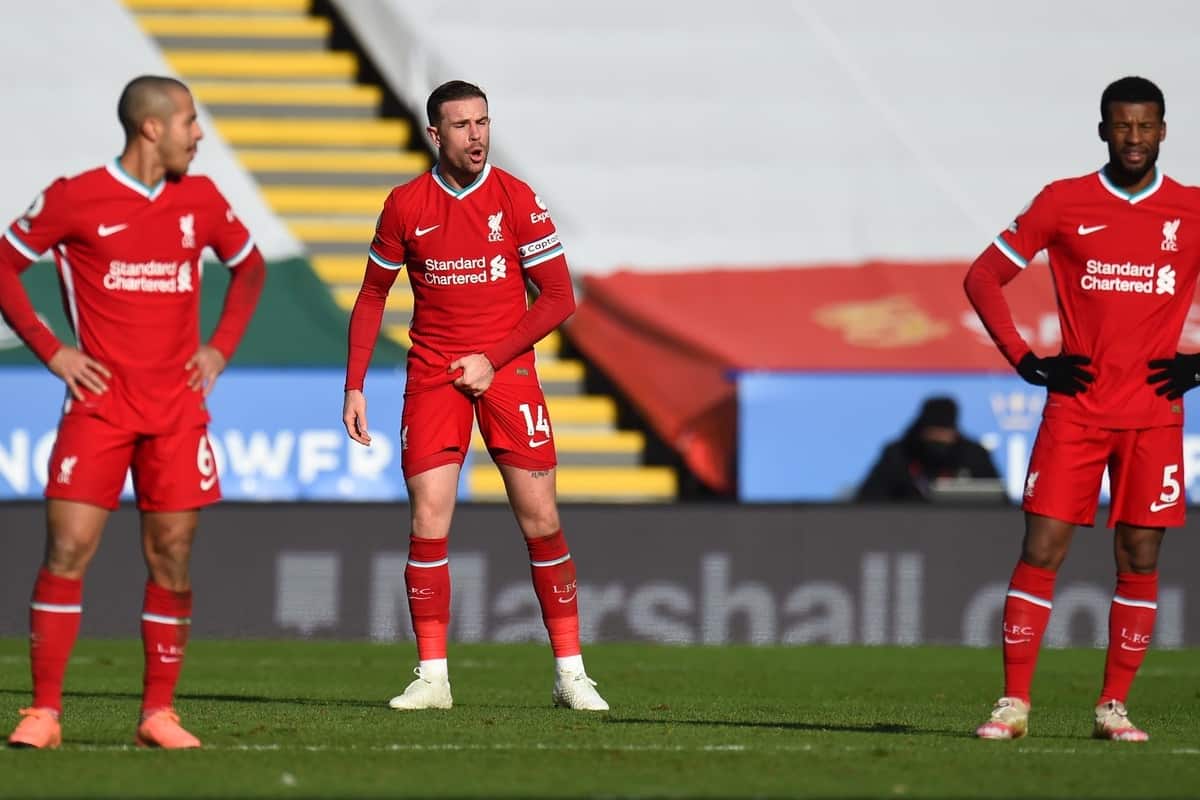 Liverpool were beaten 3-1 away to Leicester on Saturday lunchtime despite going ahead, as they suffered another damaging Premier League result.

The Reds were aiming to bounce back from last weekend’s thumping at the hands of Man City, in what was a key game in the top-four battle.

Ozan Kabak made his Liverpool debut and he enjoyed a solid first half alongside Jordan Henderson, as the two sides headed in goalless at the break.

The champions went ahead midway through the second half, as Mohamed Salah curled home to perfection after a typically outrageous Roberto Firmino assist.

Everything then went horribly wrong for Jurgen Klopp‘s side, with James Maddison equalising after yet more VAR controversy and Jamie Vardy capitalising on an awful mix-up between Alisson and Kabak.

Harvey Barnes completed the scoring late on, as Liverpool slipped further adrift from their rivals above them.

Some supporters lamented the second half capitulation…

Not really mentality monsters season are we?

The most troubling part of this for Jurgen Klopp is the way heads dropped and shoulders slumped to allow 1-1 to become 3-1. Even in difficult moments in the three previous years, 1-0 at 78 minutes would never have turned out this way.

“Yet another mental collapse…. it’s pretty unbelievable. Mentality giants? Nah…just not this season.”

“Much like the Man City game. Controlled the game in periods. Silly fouls given away. Mistakes galore. Midfield sub (Ox in this game) coming in and the midfield then losing shape.”

– Worgan on the forums.

We are just handing games away for free now. Very generous of this Liverpool side. Very, very generous.

Others were more level-headed, though…

This season really is death by a thousand cuts for #LFC. They’ll be the usual over analysis and doom predictions but the amount of mitigating factors with zero luck and zero confidence right now is all the analysis you need. Roll on next season.

For Liverpool, maybe this is just what happens when your two best defenders are out for the season by mid-November and a replacement doesn't take to the pitch until February 13.

“Disastrous result, but for most of the game, we were definitely the better team. Enforced changes destabilised us somewhat, and Leicester took advantage. Our efforts weren’t helped by the refereeing team however.”

I honestly feel immune to it all now, am numb to the results. It doesn't feel like real football.

Liverpool were comfortably better for 70 minutes of this. You only have to laugh at the absolute absurdity of their season.

Some bemoaned VAR once again…

I don't understand what the blue line is supposed to be touching. pic.twitter.com/DjsuJDWh82

You can’t defend your title when you have 1.25 var choices go against you every game

“Surely it was offside I don’t get it.”

I still can't figure out how the equaliser isn't offside. Anyone help me out?

Individuals weren’t free from criticism, though…

Might be in the minority here but if Alisson comes all that way, as a centre-back, you have to let him clear it. He'll have definitely shouted for it.

All starts with Thiago conceding an entirely avoidable free-kick. A brilliant player in possession, but really suspect defensively. No surprise Henderson was so unhappy.

Blaming Kabak for Alisson sprinting for the ball is out of order. Alisson should’ve been experienced enough not to charge at the ball when Kabak was closest and has only been at the club for 2 weeks. Ali’s mistake.

“Thiago’s foul (which was close to a penalty) starts that sequence. Alisson should be saving that anyway, offside or no. From there it’s the Alisson show again. That’s the match.”

For such an obviously world class footballer I've been staggered by how rash and stupid Thiago is in the tackle. Christ.