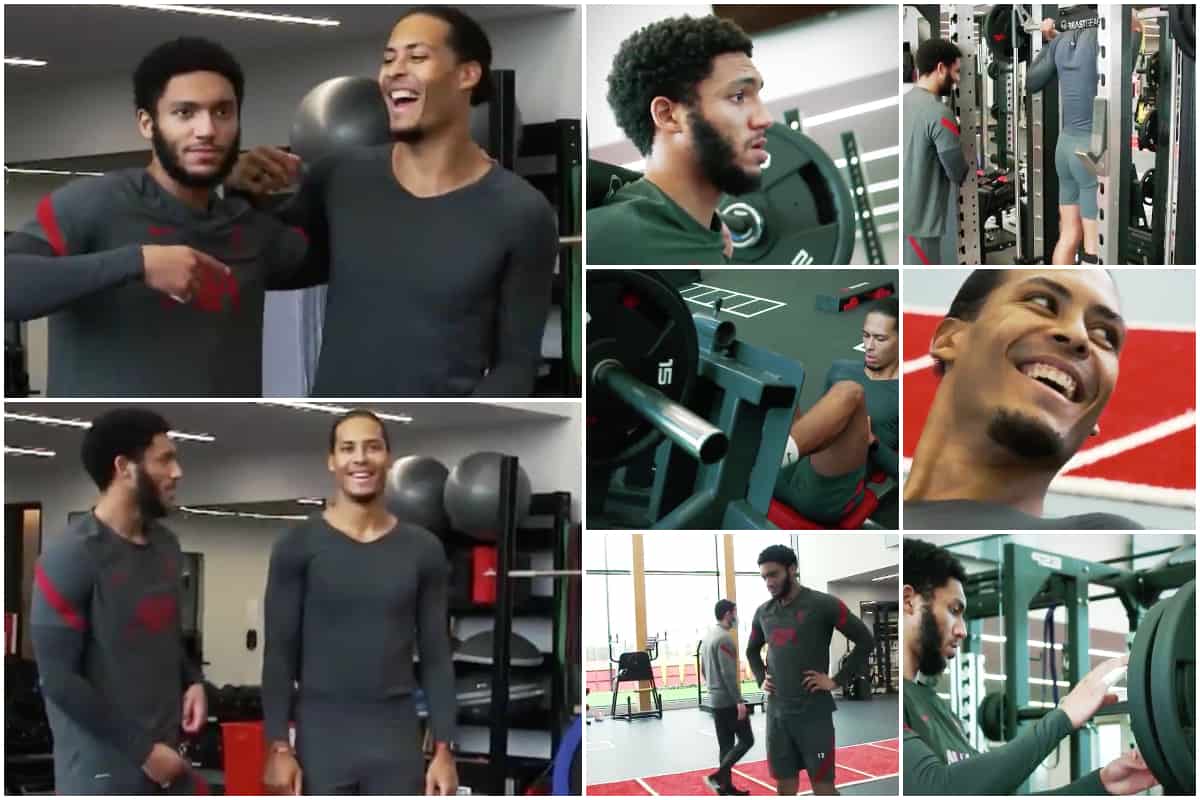 Liverpool duo Virgil van Dijk and Joe Gomez have been reunited as they undergo their rehabilitation from season-ending knee injuries alongside one another at Kirkby.

Van Dijk and Gomez are both expected to miss the rest of the campaign having suffered major knee injuries in October and November respectively.

It is a situation, combined with Joel Matip‘s own long-term absence, that has had a damaging effect on Liverpool’s title defence, but the focus now is on their recovery.

While Gomez has kept a low profile during his time on the treatment table, working on an individual programme at Kirkby, Van Dijk has provided more regular updates during an eight-week spell in Dubai.

But with the Dutchman now back on Merseyside, Liverpool have provided a new update on the pair as they work together in the gym:

Van Dijk and Gomez have developed a strong relationship on and off the pitch during their time as team-mates, and this shines through as they clearly relish the company.

Their session on Friday was overseen by Liverpool’s new head of recovery and performance Andreas Schlumberger, along with physio Joe Lewis and fitness coach David Rydings, and largely involved strength and conditioning work.

Though Van Dijk is believed to be further along in his recovery, both are able to take part in light ball work, with Fabinho also doing so as the Brazilian nears his return.

Any update regarding the fitness of Van Dijk and Gomez should be taken with a pinch of salt, as it is still highly unlikely either will be seen on the pitch before the end of the season.

But their reunion at Kirkby provides a feel-good moment in a difficult campaign for Jurgen Klopp‘s squad and supporters alike, as seen with the reaction on social media:

Ain’t nobody like Joe Gomez
Makes me happy
Makes me feel this way pic.twitter.com/IEWkICXDCj

Van Dijk x Gomez is defo content you love to see on a Friday afternoon?

Absolutely crazy how Van Dijk dropping pictures of him working out changes our mood completely.

With the Merseyside derby to come on Saturday, this is a welcome reminder that, despite their absence this season, Liverpool have one of world football’s best centre-back pairings on the mend.

Now working together at Kirkby, Van Dijk and Gomez can set their sights on rebuilding their connection on the pitch when they return.