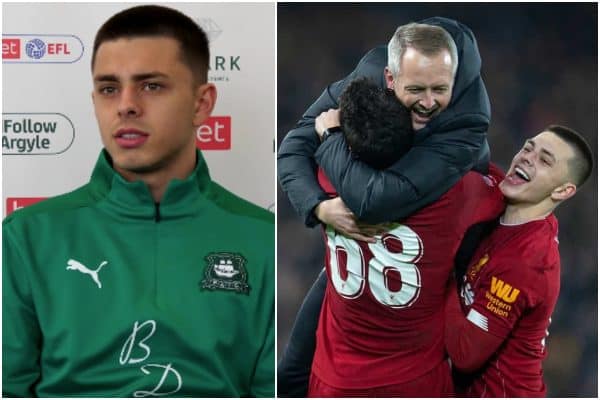 While the majority of domestic football has been put on hold for international exploits, two Reds remained in action for their club – which led to an academy reunion.

It was life as normal for the majority of League One sides while other divisions were put on temporary hold, but Adam Lewis had a date with a former manager.

That being Neil Critchley as Plymouth travelled to meet Blackpool to dent their play-off hopes and in turn boost their own.

Lewis was handed his sixth league start against Critchley’s side, a manager who oversaw the 21-year-old at Liverpool’s academy and handed him his senior debut in that FA Cup win over Shrewsbury in 2020.

The youngster was back in a more orthodox left-back position this time around and played a role in Plymouth’s relentless start which saw Ryan Hardie score against his former side to open the scoring in what was an eventful 2-2 draw.

Lewis’ deliveries from the left presented a number of chances to his teammates, but the inability to find a second was punished.

Blackpool targeted the left side and levelled the scores before a spot-kick was converted after Lewis was deemed to have pushed Demetri Mitchell, it was on the soft side.

The 21-year-old was withdrawn after 84 minutes, with his side going on to score an equaliser in the last minute of the game to see the point difference between the two teams remain at eight.

Elsewhere, Vitezslav Jaros notched his second successive start for Irish Premier Division side St Patrick’s Athletic on Saturday where he helped guide his side to their first win of the season.

The 19-year-old backed up his senior professional debut when St Pats hosted Drogheda United, with two involvements playing a big role in the outcome.

The first of which saw him fumble a cut-back to see the ball land at the feet of Daniel Corcoran, who levelled the scores merely eight minutes after St Pats’ opener.

But when he needed to step up to the plate, he did so after being continually peppered in the final exchanges, with his point-blank save at an acute angle in the dying stages ensuring his side could go on and score a winner at the death.

The 2-1 victory was his first in professional football and he will be looking to back it up against Bohemians next time out in what will prove another valuable step in his development.