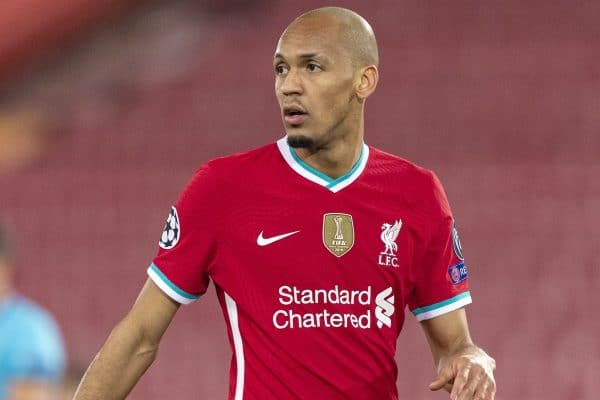 Fabinho CB in a 4-3-3 or reshuffle to counter-attack? – Predicting Liverpool’s lineup vs. Leipzig

Liverpool have to find a much more solid performance – and preferably a scoring touch too – to finish the job in Europe and knock out RB Leipzig on Wednesday.

Jurgen Klopp rested a few faces at the weekend, but in another league defeat to Fulham the plan hasn’t really had the desired effect yet. If we don’t progress in Europe, it’ll be a doubly costly decision.

That said, those changes should mean the likes of Fabinho, Thiago and Trent Alexander-Arnold are all raring to go for the last-16 second leg, with the boss certain to bring them all back in for the Champions League game.

There will be decisions to make elsewhere, too: who plays at centre-back? Can Diogo Jota start twice in a row? And should a tactical change be considered?

Here are the possibilities for how Liverpool could line up against Leipzig.

Two out, one back

In training ahead of the press conference, two notable absences came in the shape of Roberto Firmino – who also missed Fulham – and James Milner – who played.

That pair look unlikely to feature in this vital second leg, meaning Gini Wijnaldum will again wear the captain’s armband as the squad’s fourth skipper.

However, Ozan Kabak was in training, so he should presumably be fit and available for this second leg.

The boss must also decide whether to keep the likes of Naby Keita or Nat Phillips in the side – two of the team’s better performers at the weekend – or whether to revert to the likes of Thiago Alcantara and Curtis Jones through the middle.

In his press conference, the boss was asked about Fabinho and where he might play in this game.

Klopp acknowledged that he had to be protected after another injury and so will definitely play here after being sub against Fulham, but kept it close to his chest as to whether that would be at centre-back or in midfield.

The most probable course of action is that, after wholesale changes at the weekend, we revert to what might be termed the strongest available team.

There are one or two positions and players who could dispute the exact 11, but judging by who Klopp has picked over the last couple of months, it would seem probable that Fabinho would by partnered by Kabak in defence, Curtis Jones has earned his place in the team and Jota would stay in attack in Firmino’s absence.

A standard-issue 4-3-3 hasn’t exactly set the place alight of late, but it’s what the players know best, use most frequently and – even when in-game changes come – is often the ‘starting’ formation.

It wouldn’t be a surprise, therefore, if Klopp went tried-and-trusted from kick-off.

As noted, though, there are possible alterations within that 4-3-3 framework:

The alternative is to play the tie, so to speak: Liverpool are two up, with two away goals. The pressure from the start is all on Leipzig.

Their inclination to attack and the fact they’ll have to take a few risks should open up space for Liverpool to counter into, while a slightly deeper line might also protect the defence somewhat.

A narrow, four-man midfield with two left up top – something we often see from the Reds when out-of-possession – should set us up nicely to frustrate Leipzig, keep spaces closed…and then counter in threes and fours.

Using the likes of Keita, Jones and Mane in this way could see the shape represented as a box midfield, a 4-2-3-1 or an outright 4-4-2, but they are all variations of the same approach to remain tight in a deeper block than usual, then spring at speed.

One goal for the Reds means Leipzig need three in 90 minutes, and given how Mane scored in the first leg, a few lightning breaks might be exactly what we need.

Alternatives to consider with a counter-attacking approach:

Whatever the choices Klopp makes, there’s simply no excuse for the players this time. We have the lead, we have the chance, let’s use it to improve and progress.