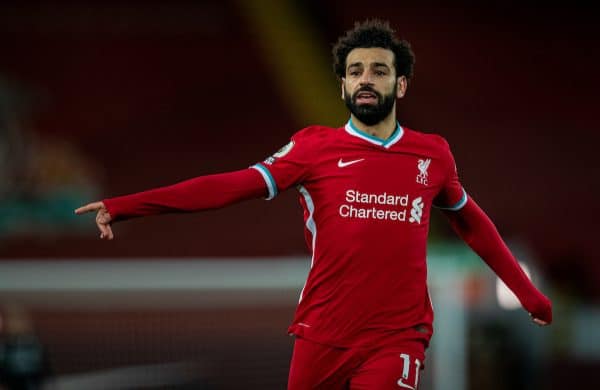 Mohamed Salah could hit 25 goals for the season with one against Fulham this afternoon, as Liverpool look to restore their dominant record against London clubs.

Liverpool have won seven of nine league games against London opposition this season – the exceptions being the 1-1 draw at Fulham last December and the midweek defeat to Chelsea.

Mo Salah has scored seven goals in nine league appearances this season against teams from the capital, while four of Roberto Firmino’s six league goals this season have come against London teams.

Salah needs one goal to register 25 goals for a third Liverpool season out of four.

On this date in 2020, Liverpool last played to a full house in the Premier League – a crowd of 53,323 watched their 2-1 home win over Bournemouth.

Fulham on the road

Fulham have won once at Anfield in 34 visits in all competitions – in May 2012 while Martin Jol was manager.

Have won just two of their 13 away league games this season.

They won 2-1 at Leicester with goals from Ademola Lookman and an Ivan Cavaleiro penalty and recently won at Everton with a brace from Josh Maja on his full debut.

However, only once this season have they conceded more than twice away from home – in their opening away game at Leeds, going down 4-3 – and have conceded only five goals in the last seven league fixtures on the road.

Home and away, Fulham they have conceded two goals in the last six matches, with one of those being an own goal.

After shipping 10 goals in their opening three games of this Premier League campaign, Scott Parker’s men have conceded just 23 in the last 24 games.

They are unbeaten in the last seven away league games (drawing six of those) – a new club record in the Premier League.

Parker as a player and manager has won 10 of 19 meetings with the Reds, drawing three and losing six.

He did not win in eight visits to Anfield as a player with Charlton, Newcastle, West Ham, Tottenham and Fulham.

Kevin Friend takes charge of a Liverpool game for the fifth time this season – the Reds have won one of the previous four.

He sent Fulham‘s Tim Ream off just six minutes into an FA Cup tie at Man City in 2020.