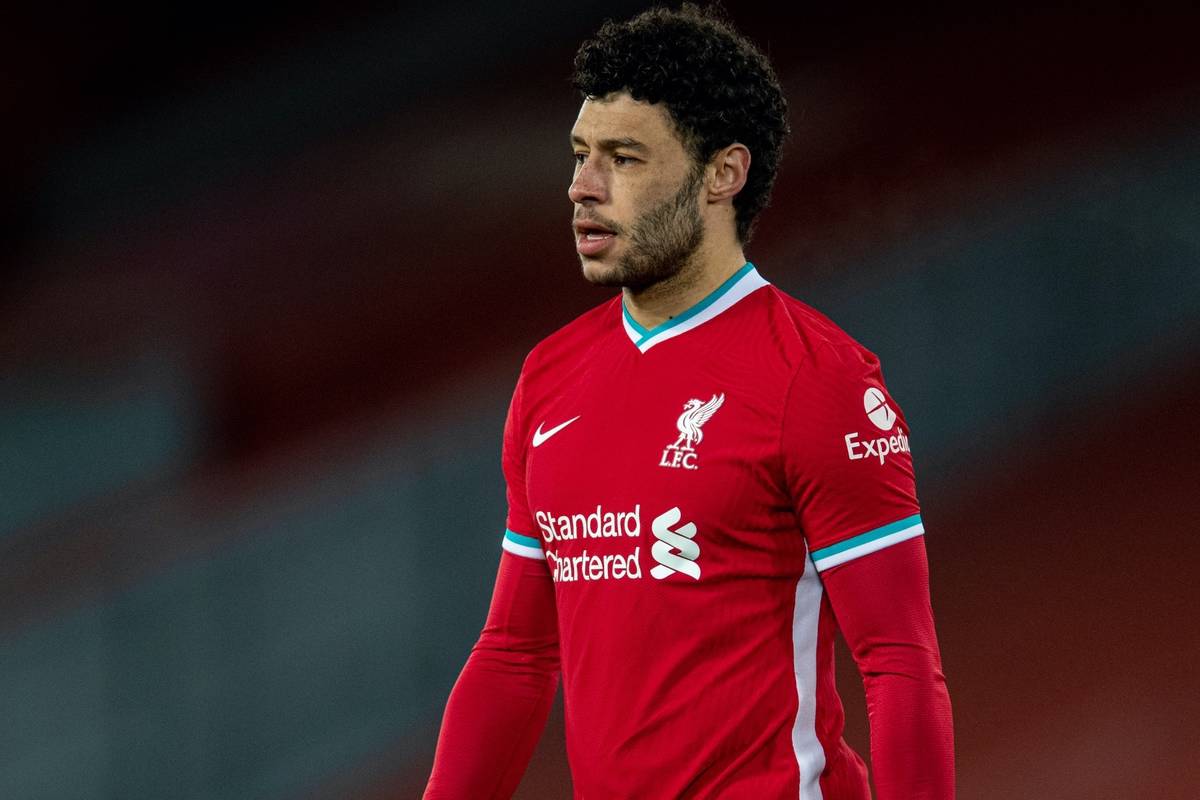 Jurgen Klopp described Liverpool’s hard-fought victory at Wolves as a “dirty three points.” It was a fair assessment of an encounter short on quality, if not incident.

Given the German is emerging from the worst run of his managerial career he’ll care little how wins are chalked up.

Indeed, as the Reds attempt to mount a late and unlikely charge for the top four, results matter more than performances.

Even so, heading into a three-week break he’ll relish every bit as much as his players, the boss will have drawn a couple of positives. 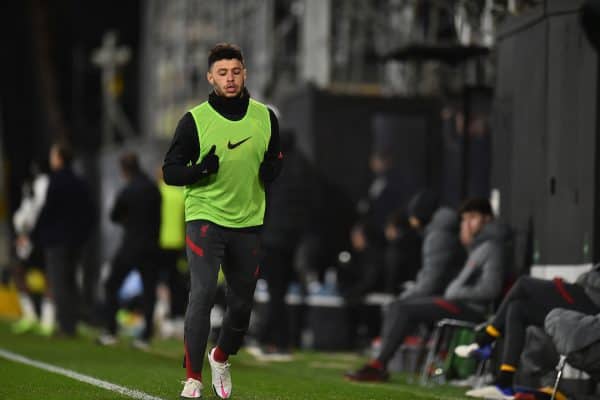 The first was another solid showing from a makeshift centre-back partnership looking ever more dependable. Ozan Kabak, in particular, is displaying maturity beyond his years.

After a rocky start to life at Anfield, the Turkish international is beginning to look worth every penny of the £18 million required to make his loan permanent.

The second fillip was rather more fleeting and came courtesy of this season’s forgotten man.

Alex Oxlade-Chamberlain has endured a miserable campaign. Sidelined for four months with a knee injury, he only returned to the fold in December, around the time his team’s form nosedived.

As a direct consequence, the midfielder’s game time has been severely restricted.

Faced with perhaps the worst injury crisis in Premier League history, Klopp was forced to get creative with team selections. Square pegs were deployed in round holes to paper over widening cracks. The results were ugly, in more ways than one.

Amid that backdrop, affording a player short on fitness a run of games was deemed too risky. Defeats and hindsight mean we can now question that stance but in truth Oxlade-Chamberlain’s cameos hardly merited more involvement.

Certainly, his two starts left a lot to be desired. He toiled in a midfield three away at Southampton and vanished wide of a front three at home to Burnley. Both games ended in 1-0 defeats. 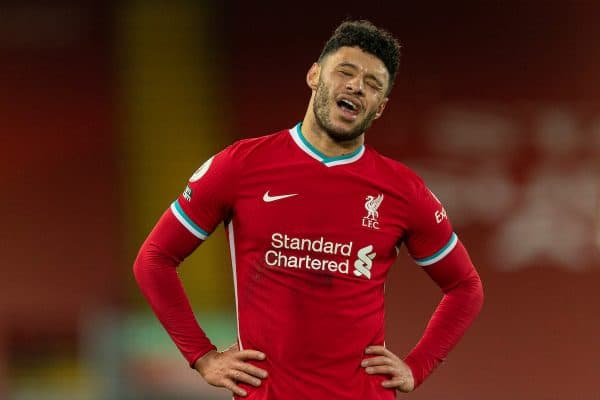 Substitute appearances proved equally disappointing. The consensus seemed to be his introduction made us worse against both RB Leipzig and Chelsea.

That they came as a ‘false nine’ highlighted part of Oxlade-Chamberlain’s ongoing struggle. He has become a victim of his own versatility, seldom trusted to play in his natural midfield position.

Nevertheless, green shoots were in evidence. He looked sharp, pressed well, committed players and would have registered an assist had he released a pass a second earlier.

For perhaps the first time this season he has a display to build on. But build on it he must, given serious questions are being asked about his future. 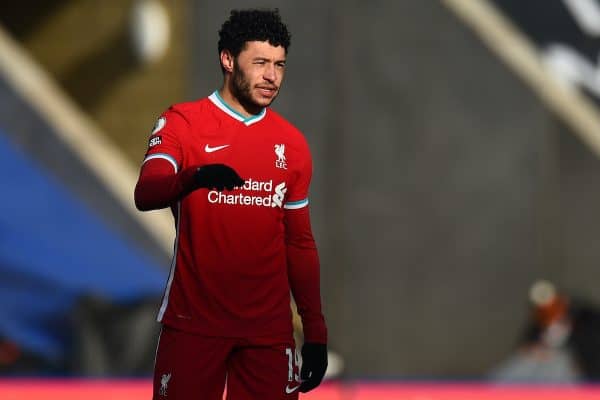 It’s not uncommon for supporters to play Football Manager as a season enters its home straight and with the expectation Liverpool will again have to sell to buy, many are seemingly willing to sacrifice the Ox.

It’s not unrealistic to think those same conversations are being held internally.

As if to underline that point, the Liverpool Echo this week reported that, while Klopp remains a big admirer, a sizable offer would be entertained. Ironically, last week’s opponents have been linked.

Yet it’s surely too early to give up on the former Arsenal man, given there remains untapped potential.

It’s unfortunate that we only truly glimpsed his worth for a four-month spell in 2017/18 before he suffered a catastrophic injury in the shape of multiple ligament damage.

It’s easy to forget Oxlade-Chamberlain had built up a head of steam, entrusted to break from a solid midfield trio and create.

His goal and performance in the Champions League quarter-final victory over Man City encapsulated a player in the form of his life, about to kick on.

It’s cruel that injury prevented that, albeit a theme of his career. 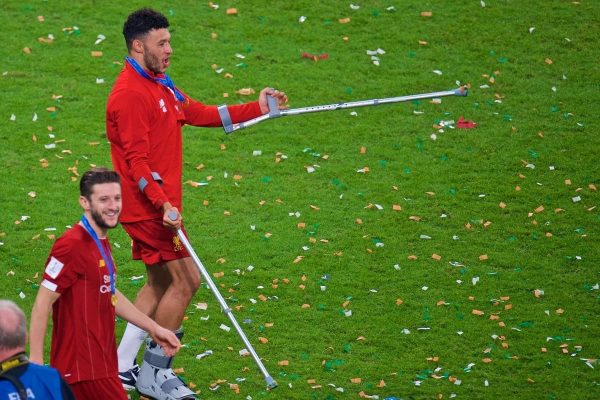 Returning to fitness on the back of such a horror injury is one thing, recapturing your form is quite another. That’s something Liverpool will be mindful of as Virgil van Dijk continues his rehabilitation.

Ox himself was back in action a year and two days on, and eased back into proceedings at the start of the following, title-winning season.

His contribution to that success, though inconsistent, should not be forgotten.

He made 30 league appearances last term, notching four goals and an assist. His eight goals in all competitions meanwhile meant he was Liverpool’s highest scorer outside of the front three.

And goal involvements are what separates him from his rivals for a midfield berth.

The red machine that conquered England, Europe and the world was always over-reliant on the output of Messrs Firmino, Mane and Salah. It’s no coincidence it sputtered as their collective goal tally has waned. 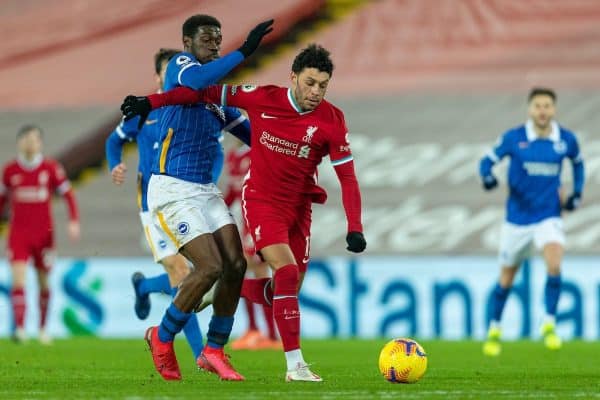 Goals from midfield have been in short supply. That’s not easily remedied in the transfer market, particularly when money is tight. Oxlade-Chamberlain, for all his flaws, presents a readymade solution.

He also offers unpredictability, something badly missed in a series of frankly awful Anfield showings. He’s not averse to dropping a shoulder, beating a man and trying his luck from distance.

It doesn’t always come off, but it does pose a different question for defences that have done their revision on our preferred patterns of play. 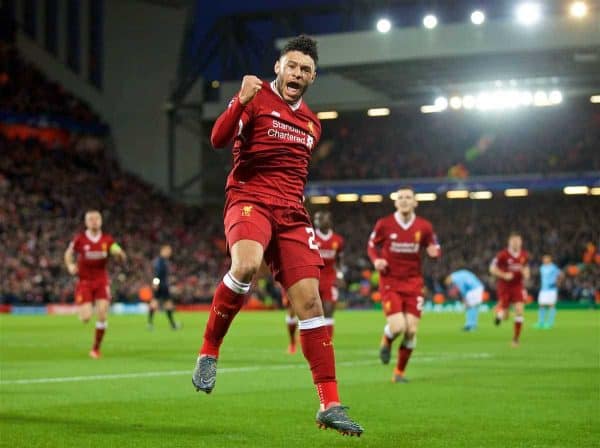 Oxlade-Chamberlain in full flight remains one of the best attacking talents in England. If you’ve forgotten that re-watch our infamous last-16 clash with Atletico Madrid, the final game prior to lockdown.

He was inspired that night and did as much as anyone to edge us in front in the tie, before others squandered that advantage. Not for the first time in his career the timing was off, hitting top form just before the suspension of football…

If he could put a run of form together now though, it may be timed to perfection.

The next two months are arguably the most important of the England international’s career, with his most recent injury allowed the likes of Curtis Jones and Xherdan Shaqiri to leapfrog him in a midfield pecking order.

He now has a fight on his hands to muscle his way back into contention and see off the Swiss at the very least. Failure to do so may see him sold or loaned to a mid-table side.

Oxlade-Chamberlain needs to make sure Wolves was the start of another rehabilitation.