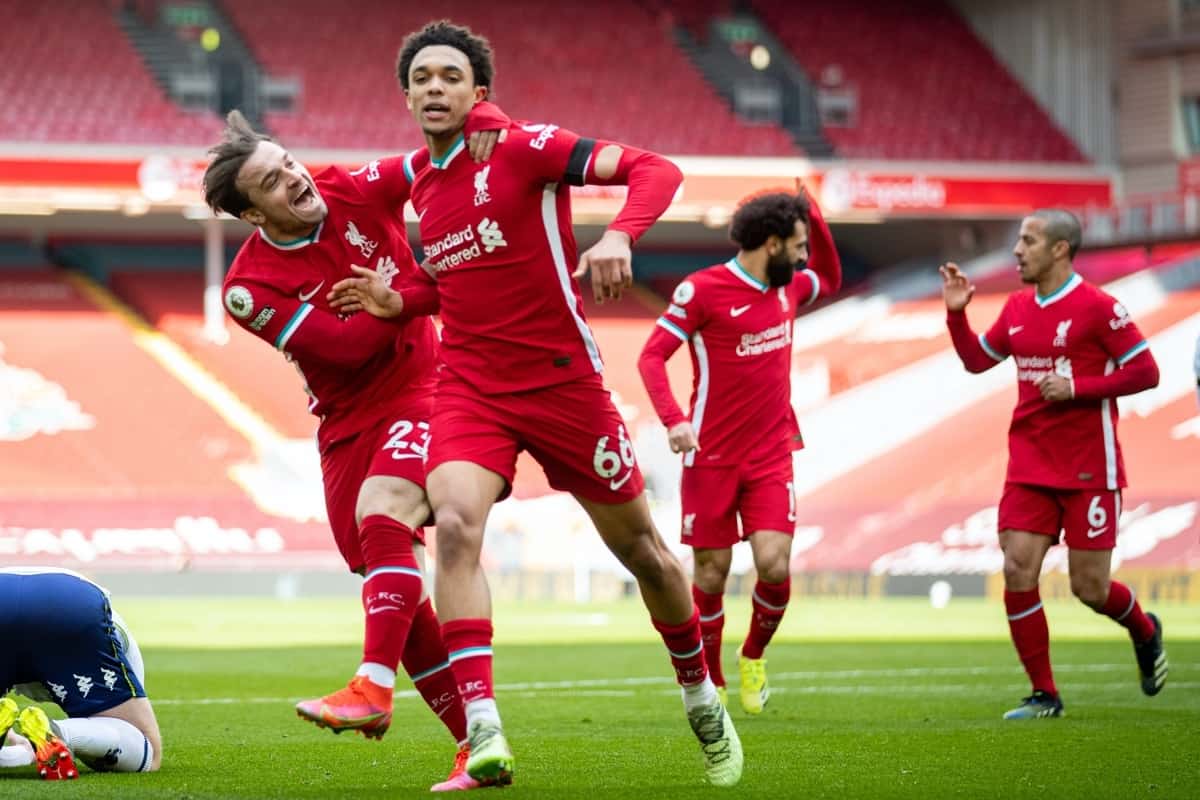 Liverpool have finally won a game at Anfield! A last-minute winner sent the Reds into the top four after a comeback victory over Aston Villa. 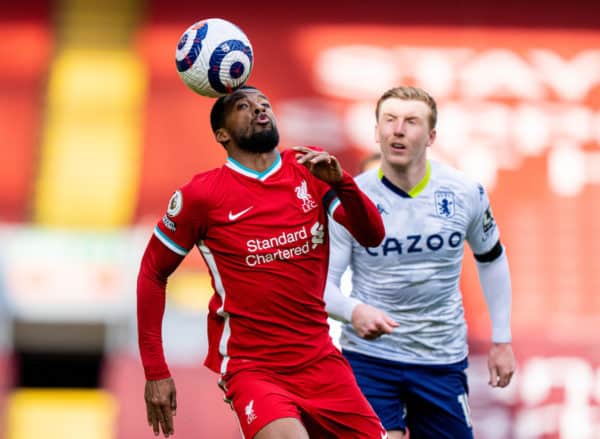 All the post-match talk midweek was over the selection and the performance level in midfield, neither of which turned out to be good enough.

Changes against Villa were inevitable, therefore, but it was still a curious alignment that Jurgen Klopp chose.

Fabinho, Wijnaldum and Milner is not the most adventurous, lightning-quick or goal-laden trio, though they all show their worth in stamina levels, positional play and winning back possession.

Perhaps that was the point, as this was very much like a diamond midfield off the ball, Firmino dropping in deep again, Jota narrow and the Gini-Milner duo performing an awful lot of work both in the channels and centrally – maybe more shuttling work than an option like Thiago would be best-served being asked to perform.

Milner, in fairness, was fairly heavily involved and usually in a positive way, perhaps involved to encourage the speed and determination in the team’s play after the hopelessly inert showing in Europe.

On the other side of the team selection equation, four players in particular stood out for not being picked.

Sadio Mane was maybe the least surprising of the quartet. The No. 10 was atrocious in midweek and has not been in good form for months; perhaps it was a case of rest ahead of the second leg, but he certainly couldn’t argue he deserved to be playing here in any case – and he was bad off the bench too, so another sub outing could follow in the second leg.

Kostas Tsimikas, meanwhile, may well be wishing he had stayed at Olympiacos at this point. They are miles clear domestically for the title and have the classic rivalry clash against Panathinaikos this weekend.

Instead, he was yet again sub, totalling five Premier League minutes on the pitch so far this season, despite Andy Robertson playing approximately twelve thousand matches in succession (it’s 49 starts this season for club and country). The Scot is never getting rested again.

Finally, the duo in midfield might have been picked for different reasons: Naby Keita as a show of faith and trust, and another opportunity after his midweek nightmare, and Thiago because, well, he’s extremely good and didn’t start midweek either.

Anfield frustrations come to an end

It’s easy to forget as it has been a while since a home league game, but the Reds came into this match still in the midst of a club-record losing streak.

The boss spoke ahead of kick-off that he expected to see the team play with “intensity” and it certainly marked an improvement in recent first-half performances, with Salah and Firmino going close early on. Jota should have scored too – the Reds should have been two or three up by half-time, in truth, without being anywhere near exceptional.

Instead, missed chances at one end and missed challenges at the other meant it was another first half without a goal, another home game falling behind…but there the poor omens stopped, thankfully.

Despite a largely dreadful 20 minutes after netting the equaliser, the Reds did find a way.

An absolute rocket from Trent could not have been more timely, individually and for the club, with his stoppage-time winner giving Liverpool a first home league win since December 16.

The best and the bad of Brazil

‘Tache or no ‘tache, Ali has not had himself a good week. In Madrid he certainly should have done better with one or two of Real’s goals; at Anfield he absolutely should have stopped Oli Watkins’.

Our No. 1 hasn’t been his imperious self this season at all – injuries, Covid and personal circumstances all play parts in the reasons why – and we could do with him finding good, if not best, form in what’s left of the campaign. That said, there were some excellent moments of footwork in the first half to evade danger.

In the middle, Fabinho was largely decent and used the ball very well – doing everything we’d expect of him, in short.

But up front, Roberto Firmino had the biggest jump in performance level, showing many of the brilliant traits he has when on form: movement, clever passing and a great first touch.

Firmino in this form is a great asset and he was unlucky to see a deserved goal ruled out – and, quite frankly, it was an irritation to see him subbed as we sought the winner.

Onto Real Madrid, then. The short-lived burst of confidence from three straight wins was somewhat killed by our dismal first-leg showing, but there’s much to be said for it having been a kick up the backside, too.

Let’s be honest, the chances of a comeback are small. A two-nil win will do it, but huge improvements in all three thirds of the pitch are needed for that.

Liverpool have three big comebacks for the season and we must achieve two.

The first is done, ticked off here against Villa: a comeback after falling behind, winning the match and getting back to victorious ways at Anfield. For mental reasons as much as the points tally, that was crucial.

The second comeback is the Madrid aggregate scoreline – a big job, and even if we do it, it guarantees nothing beyond a likely meeting with Chelsea.

The third comeback is to claw back points to finish fourth. We’re in that place right now, but Chelsea, Spurs and the rest have a game more to play. That comeback is the longest race, and the most pivotal for summer and beyond.