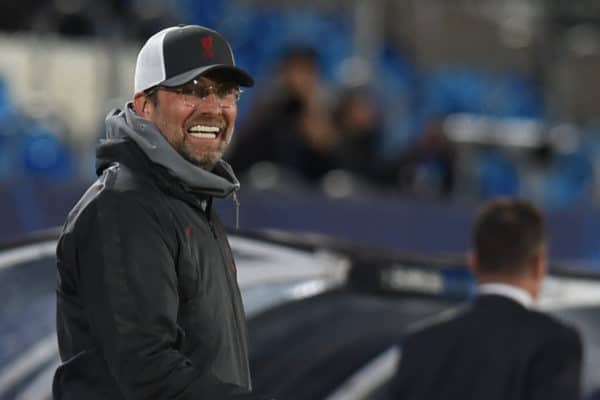 Liverpool manager Jurgen Klopp insists his side are not ‘comeback kings’ and turning around their Champions League fortunes will not be easy – especially at an empty Anfield.

A 3-1 defeat to Real Madrid in the quarter-final first leg immediately led to parallels with what they did to Barcelona in the 2019 semi-final second leg when they won 4-0 to turn around a 3-0 deficit from the Nou Camp.

That paved the way for them to win a sixth European Cup but it was achieved in an electric atmosphere at a packed Anfield which will go down as one of the greatest nights in the club’s history.

Next Wednesday they must do something similar, with the away goal helping slightly, but behind closed doors.

“If you want to have some emotional memories, then you watch the Barcelona game back and 80 percent of this game was the atmosphere in the stadium, so yes, we have to do it without that.

“But it is not that I sit here and think, ‘comebacks are our thing, we do it all the time’. We did from time to time but we always had supporters in the stadium.

“We don’t have that this time so I don’t know if we can do it, but I can promise you we will give it a proper try.

“It must be a really tricky task for Real Madrid at Anfield with or without supporters.

“This here [at the Alfredo Di Stefano Stadium inside Madrid’s club’s training ground] was really strange.

“It was really difficult, a different situation with the stadium, but Anfield is at least a proper stadium and that will be good for us.”

In a season of ups and downs, a week ago the most likely route back into the Champions League next season for Liverpool looked like coming from winning the competition itself.

However, a win over Arsenal and other results going their way has put the top four back within reach as they sit just three points adrift of West Ham, who occupy fourth place, with only one of their remaining eight games against a team (Manchester United) higher than ninth.

But Klopp said it was not realistic to just flip-flop between prioritising competitions.

“We cannot be picky with that, we have to go for everything,” he added.

“It’s not like we can now make the decision after that game there is no chance for us in the Champions League any more.

“In the Premier League, we cannot change it every week – we have to fight until the end and we will.

“But we have to play much better football [and] we cannot get it like tonight. For example, when we played against Barcelona and lost [the first leg] 3-0 we played a super game. That’s a massive difference.

“We can play much better [than against Madrid] and we can be much more uncomfortable to play against than we were and that’s what we have to make sure next week.

“Now we have to recover first and then concentrate on Aston Villa, which is for us a very important game, not only because of the results we had recently or in this season against them.”