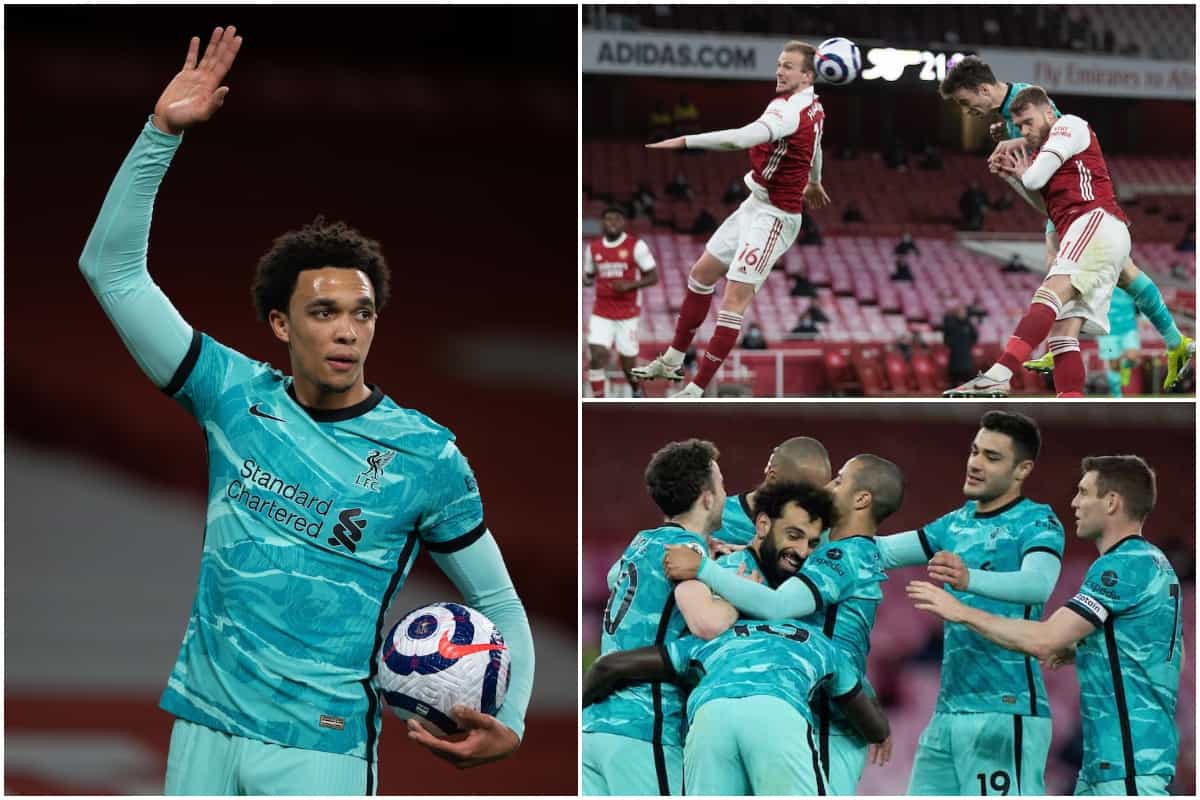 Liverpool took advantage of results elsewhere with a dominant 3-0 win at Arsenal to breathe new life into their top-four hopes, a performance which poses questions for the trip to Real Madrid.

After nearly three weeks without domestic action, Liverpool came back with a bang and easily swatted Arsenal to the side.

While it took until midway through the second half to take a deserved lead, Jurgen Klopp‘s men impressed with their intensity as they suffocated the hosts in a standout performance.

Diogo Jota was the one to make an impact off the bench, bookending the scoring with a sublime Mohamed Salah finish nestled between his brace.

The victory moved the Reds to within two points of Chelsea in fourth place with eight games remaining, injecting fresh hope and belief as we enter the final stretch of the campaign.

Here, This Is Anfield’s Joanna Durkan (@JoannaDurkan_) is joined by Aaron Cutler (@aaron_cutler) and Keifer MacDonald (@KeiferMacd) to delve into the victory and if there should be a choice between Jota and Roberto Firmino on Tuesday.

AARON: Given results elsewhere, three points took on added significance and it was pleasing to see Liverpool fight their way back into contention for a top-four finish.

A victory, however it came about, was always important to keep the league season alive. There has been some debate about our performances after long breaks but we dispelled that notion by taking control from the off.

I thought our passing was crisp, our movement sharp and our pressing style obvious for all to see. We also carved out chances against a low block, something that’s not always been the case this season. It was an encouraging display, albeit against a poor Arsenal side.

KEIFER: I think there’s only one place to start isn’t there. Trent Alexander-Arnold‘s performance, reaction, statement, whatever you want to call it, he well and truly got his one back on Gareth Southgate.

His assist for Diogo Jota‘s goal will get all the headlines but I was really impressed with his defensive ability. Similarly to the last outing against Wolves, he was up against a really dangerous opponent who he handled really well.

His cross for the opener was super – slightly edged in my opinion by his celebration – you could see how much he was dying for a big moment like that after the season he’s had to endure.

JOANNA: As Aaron said, the most pleasing aspect for me was that we took advantage of results elsewhere with the win which keeps us well and truly in the top-four discussion.

Above that, the performance was a complete one from back to front. Rarely have we looked in control for the entire 90 minutes and we just toyed with Arsenal in the end.

I reserve a mention for Ozan Kabak here, who while having little defending to do, did answer any and all questions which were asked of him.

You can tell he’s feeling more at home and he’s certainly staking his claim to remain at Anfield for the long-haul.

AARON: Fabinho was obviously immense and reminded us how different things could have been were we not forced to deploy him in defence this term. Restoring him to his natural position has been a game-changer.

Jota continues to impress and must surely now command a starting berth. And like Keifer, I have to share a word for Trent, who I thought was outstanding given recent events. His display made a mockery of Gareth Southgate’s decision to drop him from the England squad. Indeed that call says more about the manager than it does the player.

KEIFER: Jota, wow. I don’t even know what more needs to be said. That impact is certainly one way to send a message to Real Madrid and to the manager to make sure your name’s on the team sheet come Tuesday evening.

His winter absence will be part of the post-season autopsy as it seems to have played a huge part in the Reds’ dismantled title challenge.

With Salah going about his business in an untypically quiet manner this season, although he made it 26 goals for the season at Arsenal, there is no denying Liverpool have lost their killer instinct in front of goal, specifically as a unit.

Jota’s return has added that ruthlessness to the side that was missing during his winter absence, the final stretch of the season could look completely different if he didn’t pick up that injury in the Denmark dead-rubber. 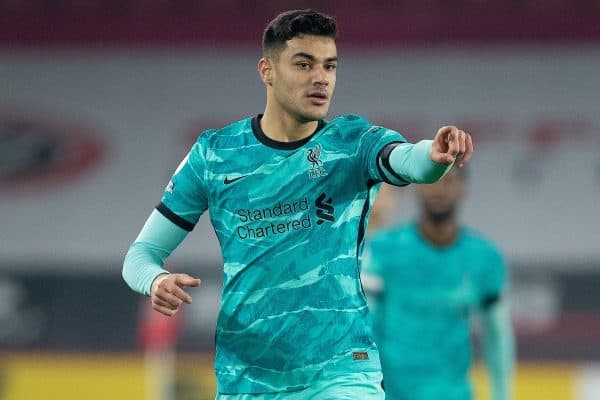 JOANNA: You can’t help but marvel at Jota and Fabinho as both Aaron and Keifer have noted already.

The former makes everything look so simple, and his vision and execution of the pass to set up Salah was superb. He’s always exactly where he needs to be and Liverpool are certainly benefitting from his shift back to midfield.

It was a brilliant team performance, but it was Jota’s clinical edge that proved the difference once more and that he has hit a hot streak with headed goals adds another valuable avenue to goal.

And let’s praise a valuable clean sheet. That’s three in three and will inject a lot of confidence into what is still a relatively new defensive line.

And Jota or Firmino to start vs. Real Madrid?

AARON: While I’ve just said Jota deserves to start I’d actually be surprised if Jurgen didn’t go with the tried and trusted front three. He trusts Firmino in big games and having a player like Jota to bring off the bench is no bad thing.

Saturday showed what an impact he can have when introduced late. It may transpire that this is Bobby’s last stand, as you cannot justify leaving the Portuguese out moving forward.

KEIFER: It’s a difficult one, if it was purely based on emotion and what I saw when Liverpool did switch to the 4-2-3-1 at the Emirates, I would start all four. However, it’s worth remembering that this is Real Madrid, 13 time European Cup winners, regardless of their form this season, they shouldn’t be taken lightly. 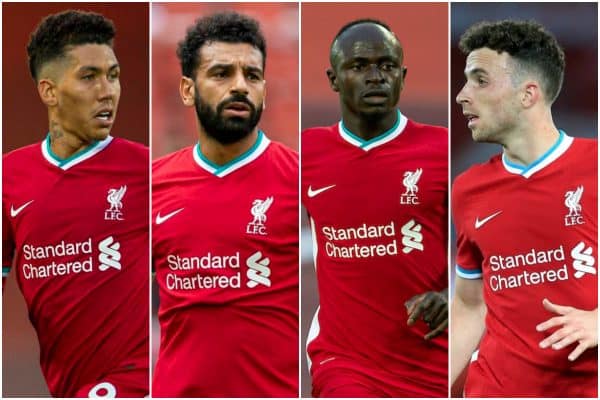 Going off Saturday’s starting XI, I’d imagine Jota comes in for Firmino and Gini Wijnaldum for James Milner, as both needed rest off the back of their extensive international commitments.

JOANNA: I agree with Keifer in that I would love to see the 4-2-3-1 get a run out with all four forwards involved, but you wonder if Klopp would prefer to stick with his trusted 4-3-3.

The thing is, you could make an argument for a number of variations and that’s a nice problem to have at this point in the season.

If you were putting your money on it, you may edge your bet with Firmino, Salah and Mane – however, I’d suggest Jota coming in for Mane on the basis that the No. 10 looks off the pace and void of confidence in front of goal.

He’d still make an impactful sub with his pace and that may suit both him and Liverpool for the first leg.