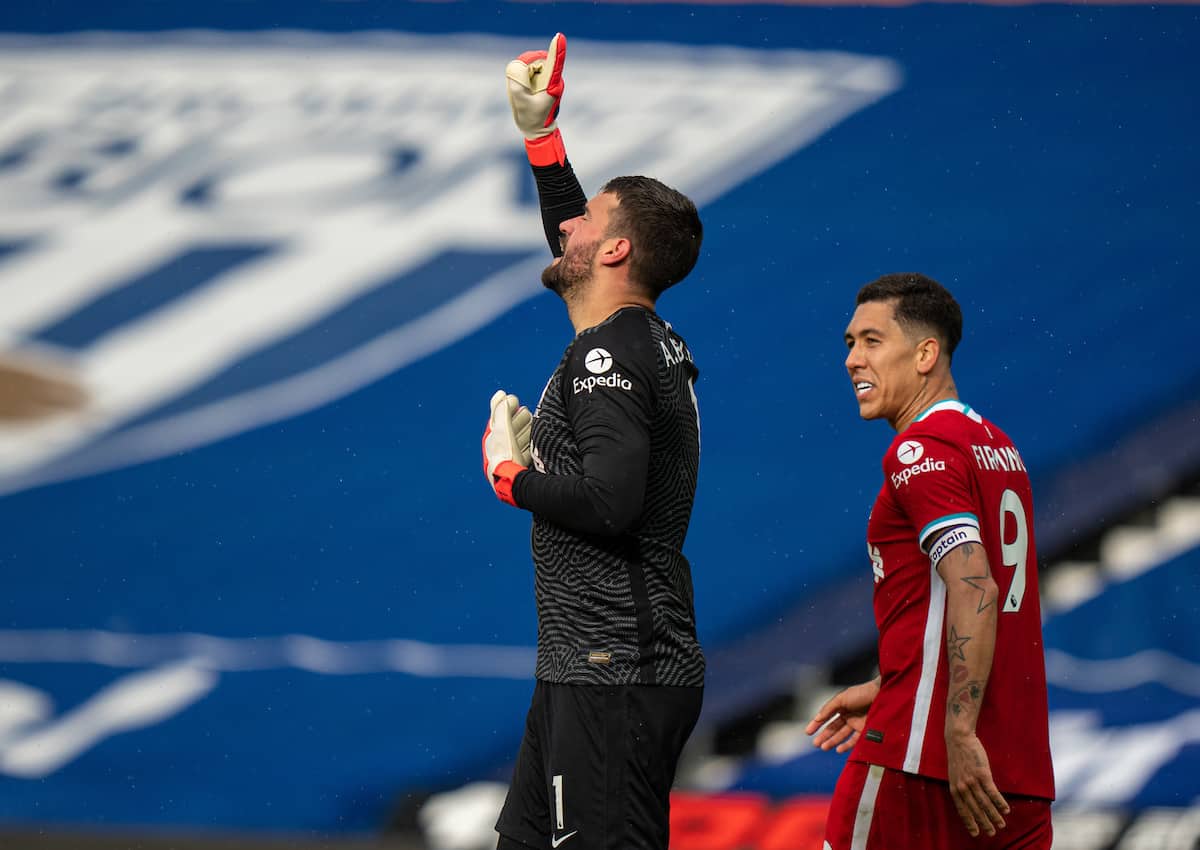 An emotional Alisson was full of gratitude for those who have supported him during a year of hardship after he scored the winner at West Brom.

Time was in the red and Liverpool needed a goal to keep their top-four hopes alive, enter the unlikeliest source in Alisson.

In his own penalty area moments before and then he’s thumping home a header to seal a win in dramatic and unbelievable fashion.

Mobbed by his teammates, the emotion of the moment was quickly made apparent for Liverpool’s No. 1 who not long lost his father in a tragic incident.

And post-match, Alisson gave a brilliant yet emotive interview where he touched on the significance of the moment for Liverpool and him on a personal level.

“I’m too emotional, this last month for everything that happened with me and my family, but football is my life, I played since I can remember with my father,” he told Sky Sports.

“I hope he was here to see it, I’m sure he is celebrating with God at his side.

“This was for my family and for the boys. What a fight. Sometimes we are fighting, fighting and things are just not happening, like this afternoon.

“And scoring this goal I’m really happy to help them because we fight a lot together and we have a strong goal to get to the Champions League.

“We won it once and you know everything starts because of qualification.

He then continued by explaining how the goal came to be before sharing his thanks for all those who lifted him up during one of the worst times in his life.

“I tried to look at the bench but no one called me and the Johnny Achterberg called with conviction and then it was the perfect time,” Alisson continued.

“The cross was brilliant, I just tried to put my head on it and I think it was one of the best goals I’ve seen! The best I’ve scored.

“I don’t have too many words but I just have to say thank you for the players because we fight a lot and we are really exhausted from this season.

“You can’t explain those kinds of things, this is football.

“You can’t explain a lot of things in my life, the only reason is God and he put his hand on my head today and I’m feeling really blessed.

“I have been away from interviews for a long time because I always get emotional on that, but I just really want to thank all of the media, all the players and teams, I’ve had letters from Everton, Man City, Chelsea [and more].

Goalkeeper Alisson scores the winner in the 94th minute ? pic.twitter.com/Cm9aw5fFYK

“Thank you everybody, from the supporters, from the team. If it wasn’t for you I wouldn’t have got through this.

“And the celebration, I don’t know how to celebrate! I, hopefully, don’t have to come to the box so many times to score a goal, hopefully, our players will do that for me.”