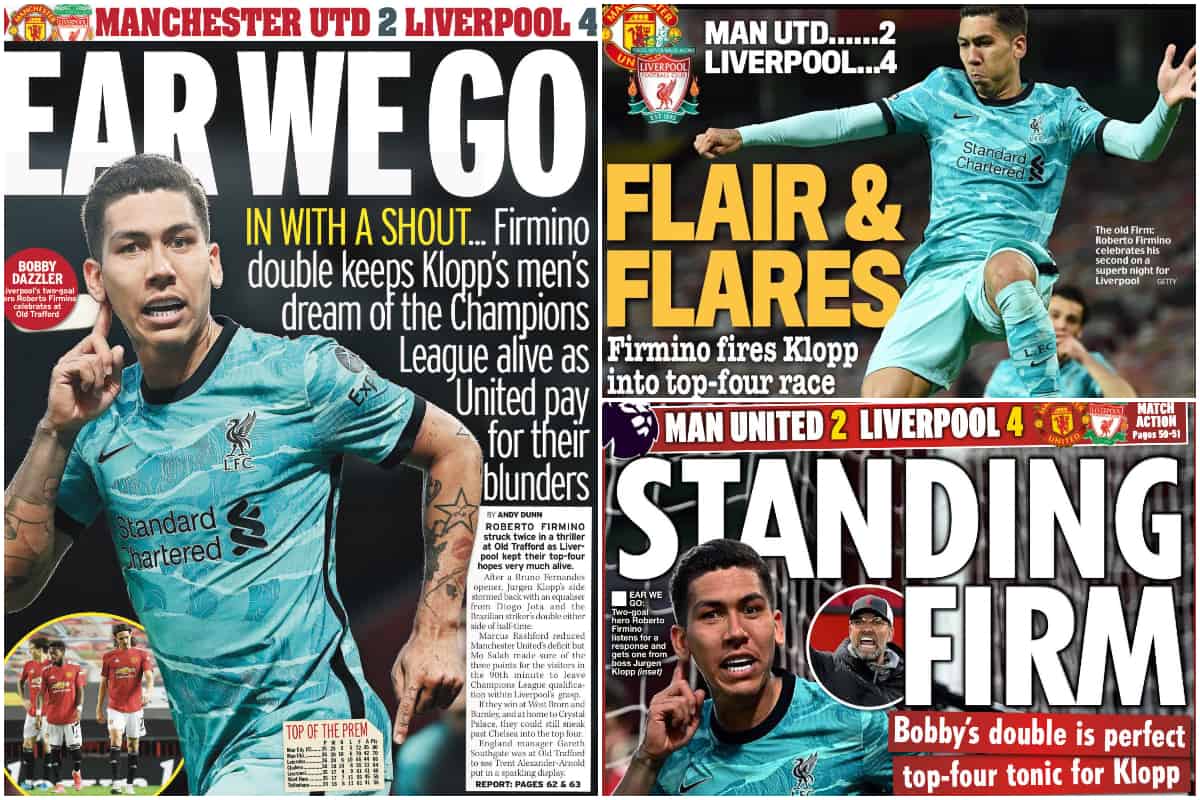 The watching media gushed over Liverpool’s vital win over Man United, as their top-four hopes were given a huge boost.

The Reds produced a big performance at Old Trafford on Thursday evening, winning 4-2 in their first victory there since 2014.

It means Jurgen Klopp‘s men now have a much stronger chance of qualifying for next season’s Champions League, but winning their last three games is a must.

Here’s how the media assessed the win.

The quality of the performance didn’t go unnoticed by many…

Darren Wells of the Mirror felt it was a display that bodes well for the rest of the season:

“Liverpool needed to get a result here to stand any chance of qualifying for the Champions League next season and they pulled one of their better performances out of the bag to keep themselves in the race.

“This was Jurgen Klopp‘s side back to their best in terms of their forward play, even if some of their defending left a little to be desired.

“And the result keeps things interesting with just a few games to go.”

The Mail‘s Ian Ladyman was another who lauded the performance:

“Here at Old Trafford, 11 days later than planned, Liverpool played rather well after a poor start. They showed desire and courage and a little belief.

“Put simply, there were signs of life, signs of the things that Liverpool are supposed to be good at. At times, they were just too slick – too clever – for Ole Gunnar Solskjaer’s United team.

“Liverpool’s celebrations at the end were prolonged. They knew the importance of this.”

“Three more wins should do it. West Brom on Sunday, Burnley on Wednesday, Crystal Palace after that. Nine points from nine should do the business, with Chelsea and Leicester due to meet at Stamford Bridge next Tuesday.

“If Liverpool get their flawless finish, they’ll have earned their spot at Europe’s top table.

“This, it should be said, was as well as they have played in weeks, months maybe. Determined and deadly, dangerous and dogged, they found their teeth when it mattered. Their big players stepped up to the plate.”

Trent Alexander-Arnold was exceptional, with some deservedly singling him out for praise…

Wells couldn’t help but have a dig at England manager Gareth Southgate, who watched on in the stands:

“You’re almost running out of things to say at this point. If it’s not clear to the watching England manager who his best right-back is by now, it’s not going to be.

“Alexander-Arnold continued his impressive run of late with another display right out the top drawer and was arguably the best player on the pitch.

“His ball for Firmino’s first goal was right on the money, and it was his persistent threat which led to his teammates second. At one stage he even popped up on the left-wing and almost scored from there.

“Just get him on the plane already, Gareth.”

ESPN‘s Adam Brown was hugely impressed with what he saw from the 22-year-old:

“The right-back has been at the forefront of Liverpool’s chance creation this season and was unlucky to end the first half with just one assist from five key passes.

“Alexander-Arnold produced one of his best displays of the season with the ball and was alert when defending against United’s late push.”

Writing for This Is Anfield, James Nalton was another who waxed lyrical over Trent’s performance:

“The right-back had more touches of the ball than any other player on either side and his performance was reminiscent of those standout displays in previous seasons.

“His passing range and accuracy was back, even though this won’t be reflected in the pass success stats (68%), as these are balls into good places rather than always directly to team-mates.

“But the ones that did land directly on the feet of team-mates stood out, and he was duly named Man of the Match by Sky.”

The top-four picture was assessed, with things looking a lot brighter all of a sudden…

“The hunt is on and Liverpool have the smell of blood in their nostrils.

“After their winter hibernation, the Reds have suddenly sprung into life. Champions League football is in their sights, the door is open and Jurgen Klopp’s men look ready to barge their way through it.

“It was tense, it was nervy, it was chaotic at times but it was vital.”

Mark Ogden of ESPN believes Champions League qualification would turn a nightmare season into a successful one:

“Liverpool top the form table over the last 10 league games, so they have quietly rediscovered their ability to get results in recent weeks. That run, and their performance at Old Trafford, only serve to emphasise that they remain a team to be reckoned with and arguably the closest to champions Manchester City when at their best.

“But salvaging their season by securing Champions League qualification will feel like a major success following their torturous campaign as defending champions – a year that has seen them lose key players, notably Virgil van Dijk, to long-term injuries and suffer that historically bad run of home defeats.

“Beating second-place United at Old Trafford – Klopp’s first win away to United as Liverpool manager – will undoubtedly act as a springboard ahead of the crucial final week.”

The Liverpool Echo‘s Paul Gorst thinks a top-four finish would be an impressive achievement, considering how much has gone wrong this season:

“It appears to be against all logic and comprehension but Jurgen Klopp and his players may still have their names in that hat when the Champions League draw takes place in August.

“If they can squeeze into this top four, you get the feeling that little will be gleaned from too much of an inquest into how it even came to this for last year’s champions.

“For now, Liverpool roll on. A campaign that has taken so much might just be about to give something back.”