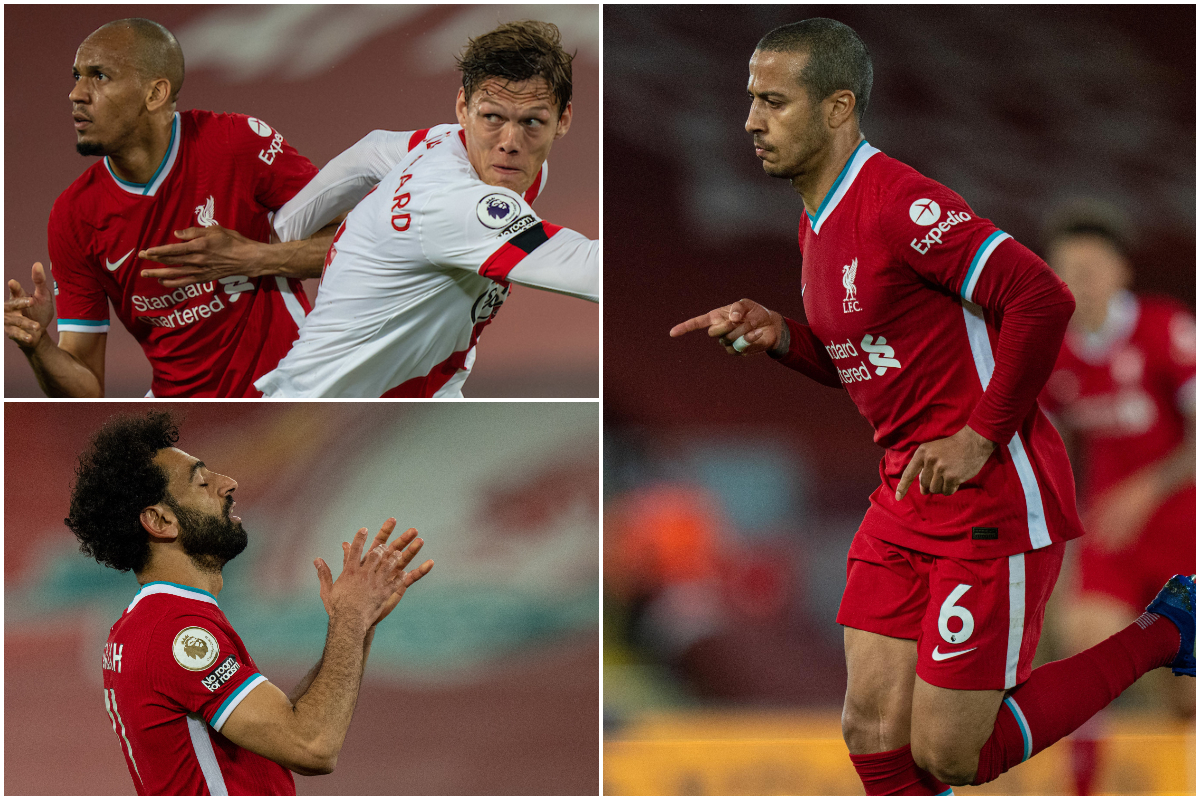 Liverpool’s 2-0 win over Southampton, combined with favourable results elsewhere, has fans dreaming of a top-four finish again. But do they really believe it is possible?

Goals from Sadio Mane and Thiago were enough to put a wasteful Saints side to the sword on Saturday night, following losses for Leicester and Tottenham earlier in the weekend.

Chelsea‘s 2-1 victory over Man City shortly before kickoff at Anfield was a blow, however, but three points for Liverpool has raised hopes of clinching a place in next season’s Champions League.

There were kernels of positivity in the Reds’ display, too, and with the return of supporters to Anfield edging closer, spirits are improving on Merseyside.

But what did Liverpool fans think of the win, and the chances of top four?

Here, This Is Anfield’s Jack Lusby (@LusbyJack), Matt Ladson (@mattladson) and Karl Matchett (@karlmatchett) pick apart the positives and negatives from the 2-0 win.

MATT: On the face of it, a lot: Mane’s first Anfield goal of 2021, Thiago‘s first Liverpool goal, a clean sheet, and now six unbeaten in the Premier League.

That Thiago was even on the pitch in the final minute, to score the first goal by a midfielder since Curtis Jones scored at Sheffield United in February, was very good.

Especially the Newcastle game, Thiago being subbed off changed the game for the opposition, so it was nice that that mistake wasn’t repeated and instead he was able to get the goal that will give him a massive boost.

The other ‘very good’ is that this was the final home game without fans.

KARL: Not conceding late on!

This wasn’t quite the same as the previous two matches in that we hadn’t wasted thousands of great chances to score the second, but it was still a bit of ‘here we go again’ when it got to the 85th minute and it was the opposition creating chances rather than us.

Alisson, one pass aside, was largely outstanding and he even made up for his own error anyway.

Nat Phillips was good in the air, Mo Salah was good overall, Thiago getting his first goal can put one or two of those pointless columns to bed about him having 0 G+A at the end of the season. 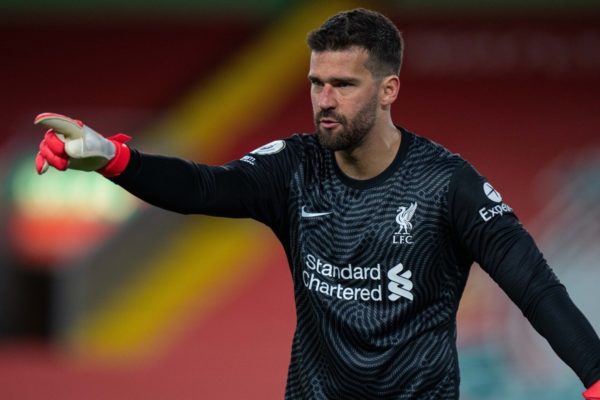 JACK: After the game, Klopp spoke about Alisson‘s heavily pregnant wife, Natalia, and how the Brazilian is “constantly like ‘still not, no, still not’,” which is obviously a big distraction when it comes to a goalkeeper’s concentration.

It is a testament to Alisson, then, that he was able to pull off such a strong performance in a game that, for long stretches, required very little from him.

When he was needed, he was there to make big saves and keep the ball moving at the back, and given he was operating behind a very inexperienced defensive duo, that was essential.

Beyond that, the fact that Liverpool were finally able to put a game to bed at 2-0 was a huge relief – it was only their third league win with a margin of two or more goals in the last three months! 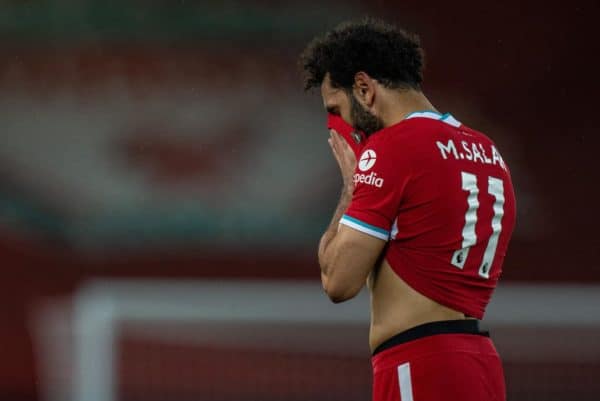 MATT: The performance itself was far from convincing was it, or entertaining.

Perhaps it’s just this season, the pandemic football effect, but I don’t really look forward to the match and rarely do I actually enjoy it at the moment either.

Jota’s finishing was a bit of an issue, he seems to be snatching at chances now rather than pre-injury when he was more natural and composed. Six without a goal for him now.

The passing was sloppy and slow at times, we were not particularly inventive moving into the final third and didn’t really dominate the match to keep Saints pegged back.

This was a team who had won three from 21 in the league: in other words, the most woefully out-of-form, downward-heading team other than Sheffield United.

And yet we didn’t exactly turn them over or batter them into submission.

Individually, Diogo Jota‘s form is poor of late, Rhys obviously didn’t cope well with the runs and passes played in behind him and, again, we have a bunch of injuries to smile and nod at.

No fans on the Kop was also bad…but hopefully that was for the final time.

JACK: Do we really have four more injuries?

We might have scraped by without them this time, but the absence of Ozan Kabak and his recovery pace in particular could be felt heavily if he misses any more games, which Klopp’s pre-match comments suggest is likely.

Kudos to them, but a centre-back pairing of Rhys Williams and Nat Phillips could get torn apart at Old Trafford.

I agree with Matt that the football is far from enjoyable at present, but then again, do we really need it to be as long as we keep winning?

And do you believe Liverpool will finish in the top four? 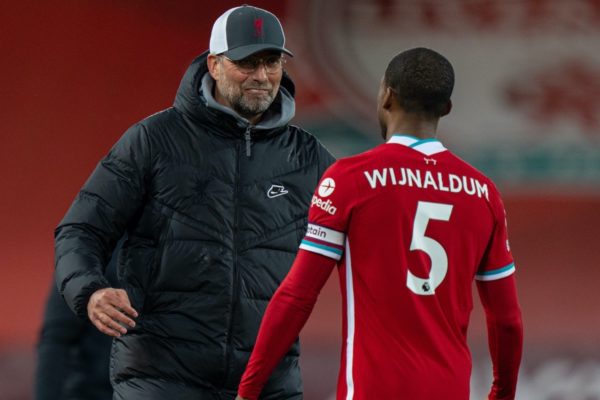 MATT: Probably not, in all honesty.

Leicester‘s result against United on Tuesday will be vital but with United playing Sunday and then Thursday, surely that’s the one they rotate in.

Klopp is probably right when he says four wins for us would be enough, but that would mean five wins in a row – something we’ve not done since pre-pandemic days last February.

There’s also West Ham to consider in this, they have very favourable fixtures too. We need Everton to do us a favour on Sunday (at the time of writing)!

At least there’s something to play for at the end of the season and making it more exciting at last.

KARL: I spent most of the 24-hour period from full time in the Leicester game to kick-off in ours muttering “it’s the hope that kills you” under my breath. 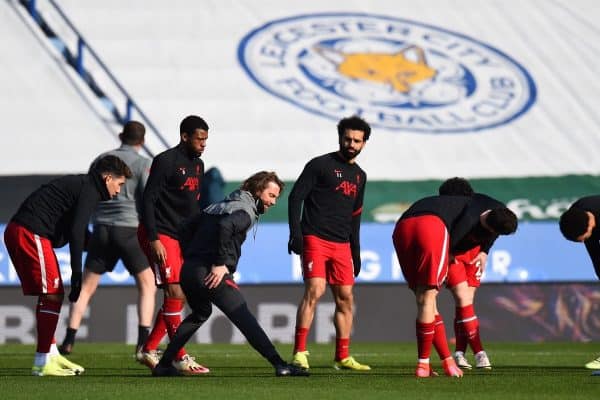 Win the two in hand and we’re three points off the Foxes, who have to play United, Chelsea and Spurs. And a cup final.

It’s more than feasible they’ll drop enough points from this stage – but can we really have confidence LFC will end the campaign on a five-match win streak?

It has only happened once this season – Ajax, Blades, Midtjylland, West Ham, Atalanta back in October before all the injuries – and we’ve got to play United in that run.

On the other hand, we’re actually the second most in-form team in the league, bizarrely. Ahead of us? Just United, who are about to embark on three games in five days.

Liverpool should, and must, win the last three. That’s 66 points, which allows Leicester one more win.

After that, it’s their other two games versus our result at Old Trafford – so I’ll say we sneak top four if we get a point against United. Prepare for them to now rest everyone against Leicester, and nobody against us. 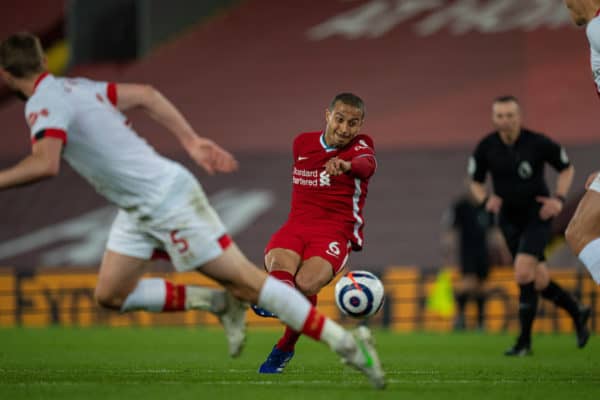 JACK: It’s great that, after all this, we’ve still got something to play for at this stage.

United aside, we have a favourable run of fixtures ahead of us, and this win could actually be a big mental hurdle overcome in terms of putting games to bed against lesser sides.

So why not? We can but dream, after all…